Kathleen Collins’ name made a big cultural rebound with a single review in The New Yorker — of an independent movie she wrote and directed in 1982. It’s a confluence of important black theater and filmmaking talent — Collins, Bill Gunn, Duane Jones, Billie Allen and, in the background, William Greaves and the history of film generated by African-Americans. 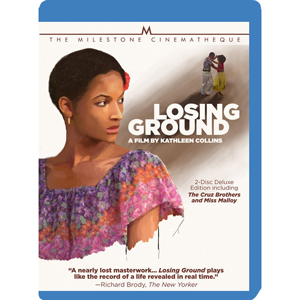 Quick, name five film directors that are black women. Well, after seeing the glowing review for Losing Ground late last year in The New Yorker, I wanted to catch up with this independent 1982 ‘new black’ movie. It was originally shown at just a few festivals and special screenings, and then was set aside and forgotten for 34 years. The very personal film was made by Kathleen Collins, a multi-talent with experience as a playwright, film editor and college educator. Unlike ethnic films that lead with a social message, this one addresses ‘blackness’ as a wholly personal concern. These black American filmmakers are talented, but they’re also well educated, articulate and artistically focused. When Ms. Collins (in an interview) talks about taking up directing, she refers to film as a discipline. 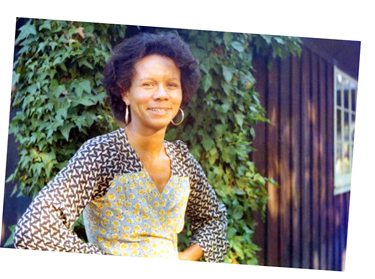 Kathleen Collins passed away in 1988 after making only two films, both of which are present on Milestone’s 2-disc set. Losing Ground has surely leapt to first place in the line of American independent films most sought by black studies programs.

Kathleen Collins adapted Losing Ground from a play she had written years before. College philosophy professor Sara (Seret Scott) has the admiration and respect of her students, but a slightly less harmonious relationship with her artist husband Victor (Bill Gunn). He lives in a constant state of enlightened ‘joy,’ but is a trifle selfish and even condescending to his spouse. An academic at heart, Sara feels that she must do research to find some special happiness. When Victor sells a painting to a museum, he insists that they spend the summer in a small town upstate where he can paint the local Puerto Rican women that intrigue him. Sara goes along with this, but is not amused when he falls into a casually affectionate relationship with his new model Celia (Maritza Rivera). Sara is expected to be a good sport — they’re above petty jealousy, in theory — but she instead rebels. She takes up a cinema student’s offer to star in his dance film based on Frankie & Johnny. Her co-star is the handsome and equally cultured Duke (Duane Jones)… and he’s not a bad dancer, either.

Kathleen Collins was an avowed fan of Eric Rohmer, the French New Wave filmmaker known for movies about guilty men talking to women instead of bedding them. Her Losing Ground focuses on dialogue that flows and actors that can perform naturally. Collins attracted key acting talent from the theater and film. That some of the peripheral extra acting is a bit stiff means little — the playing is sincere, and the key material is excellent.

Sara’s relationship to Victor is expressed both in the dialogue and in the staging. He’s a charmer, but he is as self-absorbed as one might expect an artist to be. The big museum sale means a lot to Victor, and after uprooting Sara for the summer he’s full of talk about doing less representational work and breaking free from the influence of his mentor Carlos (Noberto Kerner). Sara likes the fact that Victor is ’embracing life,’ but not the attention he pays to his Puerto Rican model. Tall and dignified, Duke wears a cape and a hat into the library, yet is not a nut; he’s the uncle of the young director George (Gary Bolling) and openly admits he’s helping the kid out while he’s unemployed. 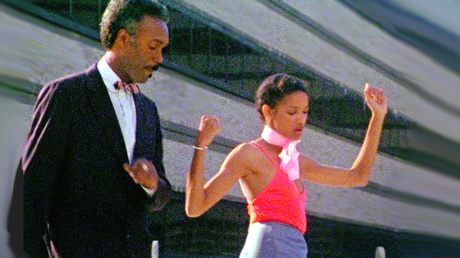 Sara finds herself expressing her feelings through the dance scenes, a film-within-a-film that allows director Collins to externalize things Sara would normally keep hidden. Young George is actually a good director: when he senses in the middle of a take that it is time for ‘Frankie and Johnny’ to kiss, Sara and Duke are feeling the exact same thing. We’re told that actor Duane Jones wasn’t a natural dancer, but the relaxed dance scenes fooled me.

As with the films of John Cassavetes, Collins’ lively dramatic scenes have the feeling of slightly improvised theater rehearsals. On the other hand, her dialogue seems fairly locked-in; as if the playwright Kathleen wants to see her lines followed. It’s still a taste of sophisticated film drama, with the added fillip that the people involved — black academics, intellectuals and artists — just aren’t normally depicted in films. Carlos is half black, half Latin … they laugh about ‘the mulatto issue.’ I will admit right not that I have no idea what the mulatto issue entails, which makes the interpersonal friction within this group all the more interesting. I’m also intrigued by the use of the Puerto Rican Latins. Other than Carlos, they seem like ‘primitive’ folks who love music and dancing, and that Victor and Sara are taking a vacation among the colorful natives. But there’s again no sense of condescension that I can see. 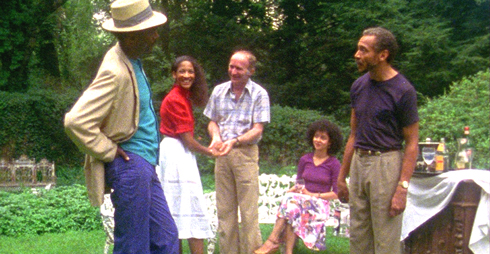 The movie’s best scenes are between Sara and her mother, played by actress Billie Allen. ‘Mom’ is a lively handful with a saucy personality; she likes to tease her daughter with ribald talk. We’re told that Ms. Collins split her own personality between Sara and the mother — Collins was a rigorous academic but also personally adventurous and assertive. Viewers looking to see an underrepresented aspect of black American life will be impressed by this woman — who came from a fairly prosperous background, went to Ivy League schools and sent her daughter to school overseas.

Sara talks to one student about American exclusionism, referring both to homosexuals and non-whites. After decades of black activist films (many of them good) that come out swinging, it’s refreshing to see a picture that acknowledges those issues, and then moves on to something else about blacks that general audiences can identify with.… such as being ordinary people with ordinary people problems. Ms. Collins gets an A+ for outlook. Wouldn’t it be fun to see Sidney Poitier walk through a movie like this, with nothing to prove and no dragons of bigotry to slay?

A little snooping reveals that Losing Ground pulls together a big chunk of black film culture that’s just now getting its due. As the first (it would seem) black female American film director, Kathleen Collins began as an editor. She worked at times with the impressive William Greaves, who made the challenging (to say the least) Symbiopsychotaxiplam movies, but has done just about everything, including acting in some prominent Black Theater Circuit movies in the late ’40s. He also has a pivotal role in a key early movie about race & bigotry, Louis de Rochemont’s Lost Boundaries. 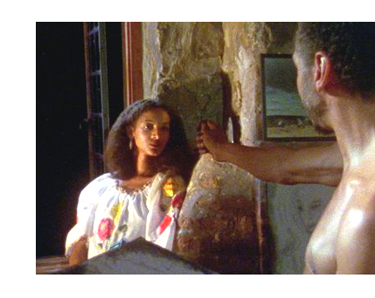 Although the actors have busy stage backgrounds, Billie Allen also made a film for the Black Theater Circuit. Stage actress Seret Scott has a prominent role in Louis Malle’s Pretty Baby. And although he didn’t list it first on his impressive resume, Duane Jones achieved immortality as the star of Night of the Living Dead.

Another multi-talent, Bill Gunn deserved the media attention given Melvin Van Peebles, as the writer and director of Ganja & Hess. His role is perhaps the most difficult to get right. Victor is an intensely creative and spontaneous artist. He’s certainly not abusive in his behavior toward Sara — but their marriage has some undefined boundaries, that he’s definitely capable of crossing. The show eventually expresses some of this conflict through the film-within-a-film, with admirable tact and judgment. The final scene distills Sara’s predicament in a few choice, well-acted images, ending on a shot of the actress too intense to just be called acting. Losing Ground has theatrical effects, but Ms. Collins has adapted them into cinematic terms.

The Milestone Cinematheque’s Blu-ray of Losing Ground is the expected all-embracing presentation of Kathleen Collins’ almost-lost film; someone did us a big favor by steering Collins’ daughter to this particular company. Shot on 35mm, the picture looks great. A few splices bump here and there, most noticeably in the main titles, but it would seem that the lab preserved the film elements in fine shape.

The first Blu-ray disc carries the feature, augmented with an audio commentary by two academics, Lamonda Horton Stallings and Terri Francis. They cover the show, Kathleen Collins and the other participants from historical and artistic perspectives.

Blu-ray 2 has Collins’ first, shorter feature, 1980’s The Cruz Brothers and Miss Malloy (50 minutes), adapted from short stories Henry H. Roth. Three unemployed Puerto Ricans in upstate New York are hired by a ditzy old lady to fix up her mansion for a party she wants to throw. Although they think her insane, the boys like the pay and go along with the joke. But her madness begins to have its effect on them. Collins said that she didn’t film one of her own stories because it was her first film and she wanted the emotional distance from the material. She does fine with the short-story feel, sketching the boy’s background as orphans entrusted to nuns. The show maintains a whimsical aspect as well, as the oldest boy converses frequently with his dead father. 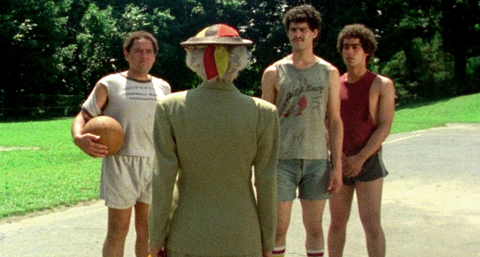 The Losing Ground disc makes ample room for Collins’ main creative partner, Ronald K. Gray, who filmed both movies and is credited as ‘Technical Director’ on the first. Gray seems to have figured out how to use a cherry picker to achieve some ‘poor man’s crane shots’ that make the film look more expensive. Gray’s contribution comes into better focus with his student film, Transmagnifican Dambamuality, which is just terrific. It’s an exaggeration of Gray’s home life that begins with slapstick action backed by insane sound effects that replace the normal dialogue. Only seven minutes long, it changes gears and ends on a completely different tone. This student film would have been a big hit at UCLA, I kid you not.

Want to spend some time with talented minority artists with something to say? Milestone includes three absorbing interviews. Ronald K. Gray tells his career story before, with and after Kathleen Collins. He’s a winning raconteur, and his explanations of their working relationship on the non-budget picture give us a new perspective on his director: “After months working together I could tell she wanted me out of her house.”Actress Seret Scott’s lengthy interview spans a lot of black history, as she was an activist-actor during the ’60s Civil Rights movement and later on a busy New York actress. She and Kathleen worked well together despite frequent differences of opinion. And Collins’ daughter Nina Lorez Collins gives us her story, including the final chapter when an educator wanting to show Losing Ground to her class, motivated Nina to restore the film just in time to keep it from being thrown away in a lab vault clean-up.

Finally we get Kathleen Collins herself, in an extended educational interview at Indiana University from 1982. The interviewer does a fine job of staying out of Kathleen’s way — after a slow start, Collins responds to the clear questions and lays out her experience in film and film teaching, ending with a fairly inspiring explanation of how she and her colleagues at New York’s City College taught film to their students.