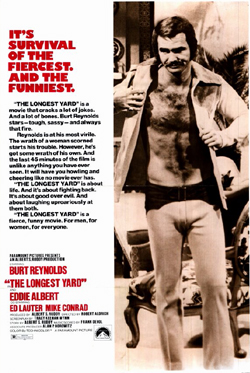 Along with Roger Corman, Robert Aldrich seems to be the director most represented on Trailers from Hell. This prison-set anti-authoritarian football movie has similarities to The Loneliness of the Long Distance Runner. Burt Reynolds, who also appeared in the 2005 Adam Sandler (!) remake, plays a violent anti-hero who makes us root for him against the corrupt establishment anyway, but Sandler in the remake is pretty much of a wimp. Remade in England as Mean Machine in 2001.