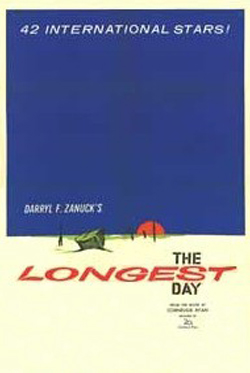 Although three directors are credited, veteran producer Darryl F. Zanuck was the true auteur behind this elaborate all-star multi-national recreation of the battle of D-Day, shot mostly on the actual locations (hundreds of live land mines had to be cleared from various beaches before filming). At the time 20th Century-Fox was overspending on Cleopatra and there was a lot of pressure to scuttle “Zanuck’s folly”, but Zanuck rammed through what was then a monumental physical undertaking, and at $10 million the most expensive black-and-white movie ever made. Gerd Oswald, Zanuck and John Wayne directed sequences uncredited.