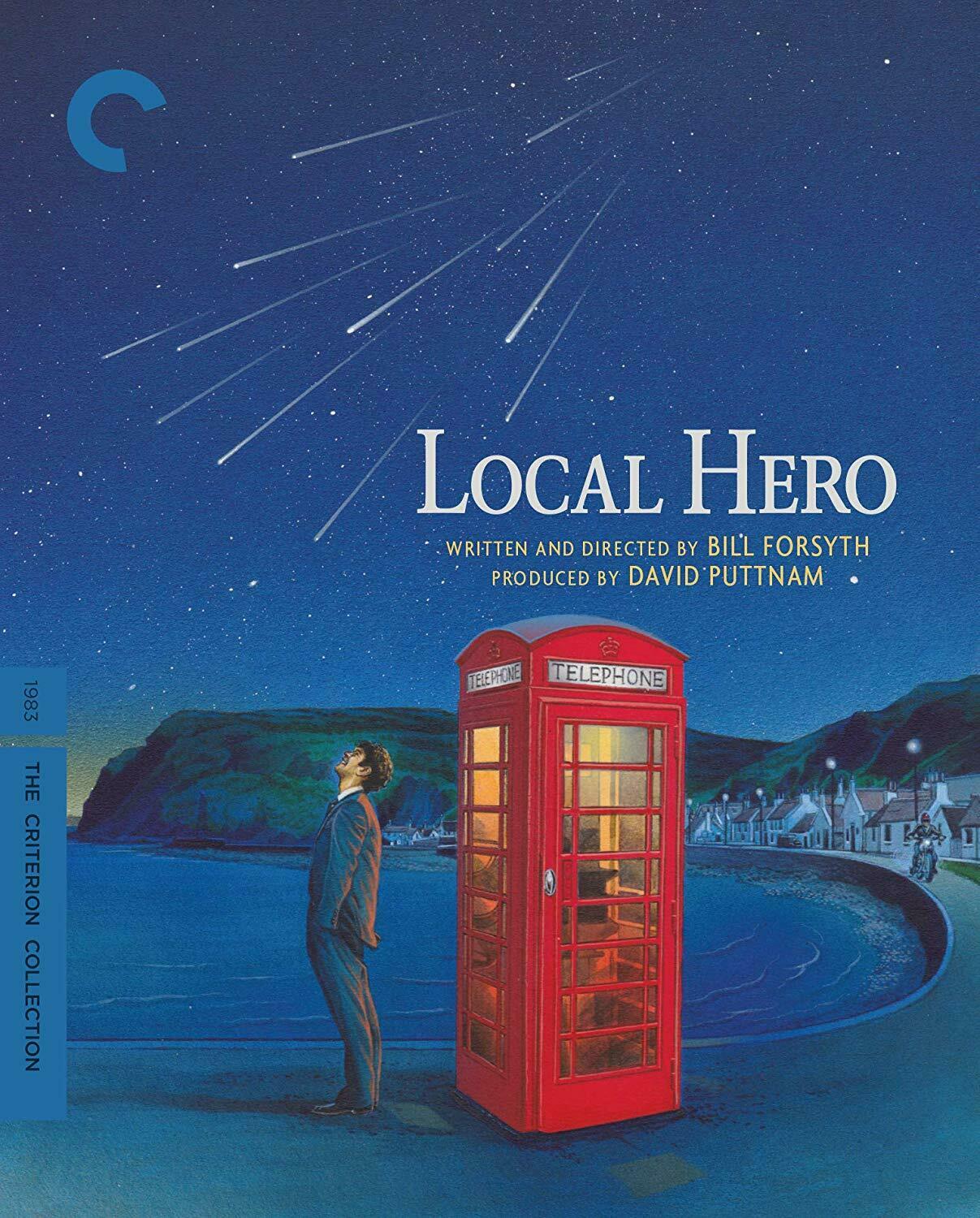 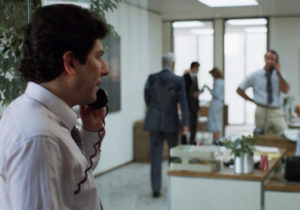 Beginning with the aptly named That Sinking Feeling in 1979, the Scottish filmmaker Bill Forsyth has produced comedies whose bittersweet humor barely concealed the hurt. “Grin and bear it” was the director’s credo and the marquees tipped his hand – Being Human, Comfort and Joy – though That Sinking Feeling said it all.

Local Hero boasts Forsyth’s most head-scratching title but there’s no mistaking the predicament of the movie’s nominal leading man played by Peter Riegert. Known simply as Mac, he’s just another cog in a Kafkaesque corporate machine, the air-conditioned nightmare of Knox Oil and Gas where Medication Time music wafts through the halls and workers in glass cubicles converse via primitive sign language.

The young executive is affable enough when the situation warrants yet wary of actual human contact (he carries a picture of his Porsche in his wallet – “pure ownership”). Mac is a telex man through and through and when given the chance to broker a lucrative deal in the storybook fishing village of Ferness he balks – telex, you know. 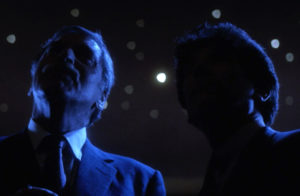 If Mac is benumbed by a life of quiet desperation, his boss Felix Happer, the bearish CEO of Knox (played by Burt Lancaster as a kinder, gentler J.J. Hunsecker) is in search of higher meaning. A borderline mystic, Happer is more interested in the stars above his head than the oil beneath his feet – he even enjoys his own private cosmos; the ceiling in his office retracts to reveal an illuminated map of the heavens. He directs Mac to monitor any unusual celestial activity in Scotland – “The Northern sky is a beautiful thing” – and sends him on his way. 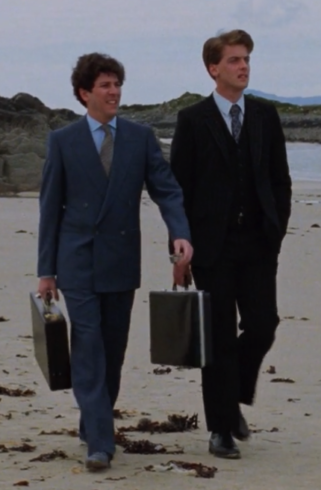 Goodbye Houston, hello Nirvana. The jet-lagged Mac is welcomed to Scotland by his attitudinal opposite – Danny Oldsen, a low man on the Knox totem pole who bursts with the nervous energy of a foraging squirrel. For better or worse, the excitable young gofer is soon to be Mac’s tour guide, confidant and translator of all things Gaelic (he’s played by Peter Capaldi – perhaps unrecognizable to those who know him only as Doctor Who or the foul-mouthed Malcolm Tucker.)

Accompanied by Mark Knopfler’s plaintive score the odd couple enters Ferness just as a heavy fog rolls in, the Scottish version of pixie dust. The haze is so thick they have to pull over – which is just enough time for Knopfler and the gathering mist to work their magic. For the next few weeks Mac is blessed with a charmed life, his one connection to home a vivid red phone box anchored between the local pub and a well-worn shipyard as sturdy as Ferness itself. 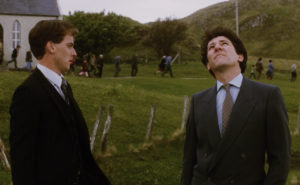 Still clinging to his suit and tie, Mac is oblivious to the magic brewing around him and concentrates on the job at hand. The plan is simple – buy out the villagers, lock, stock and coastline. With the casual arrogance of a typically Ugly American he assumes it’ll be a fast transaction and then back to the States.

But the townsfolk, ruddy-faced and gently offbeat as any Ealing character, are quite Americanized themselves – when they realize they can get rich off their Shangri-La, there’s a mad dash for the cash.

Meanwhile Mac is going native – the more he sinks under the spell of Ferness and its residents – the innkeeper Gordon and his luscious wife Stella, a wayward Russian, a mysterious biker and Jenny Seagrove as an exquisite marine biologist who moonlights as a mermaid – the more inclined he is to trade places. 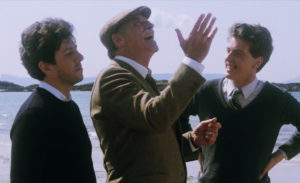 Thanks to the Aurora borealis and a lot of Scottish ale, Mac’s reserve melts completely – the chilly air seems to warm him. He begins to spend more time searching for sea shells than crunching numbers and even a brief standoff with a wily beachcomber is settled amicably after Happer arrives – who decides with one look at the Northern lights that all bets are off.

Happer has determined that Ferness is the perfect place for a marine lab – to the delight of Danny and his new beau, Marina, the science-minded mermaid. The downside – Mac is banished to Houston to oversee the project.

Mac returns to the Lone Star State but Scotland’s spell is unbroken – gazing out at the Houston skyline Knopfler’s lullaby remains by his side, its elegiac melody at war with the sirens and traffic below (it might be the only verifiable conflict in a film where all emotion is  kept in check). Knopfler’s ringing guitar sounds like an invitation – back in Ferness the phone box is ringing too. 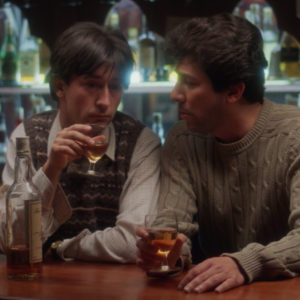 Riegert, late of Animal House, is the perfect Forsyth hero. His forlorn and funny performance as Mac is matched by Lancaster, still boasting the build of a linebacker – his mastery of the small gesture – like the delicate flourish he gives to simply hanging up a phone – is worthy of Brando’s Don Corleone (a quietly imposing monster who could have been influenced by J. J. Hunsecker).

Forsyth himself wrote the unpredictable screenplay, a mix of magic realism, absurdist comedy and heartache. The supporting cast, Denis Lawson as Gordon, Jennifer Black as Stella and Seagrove as the mysterious water nymph, are all winning performers in Forsyth’s circus by the sea – practically perfect in every way.

Chris Menges’ beautiful cinematography has an excellent showcase in Criterion’s (long-awaited) Blu ray of Local Hero. The image is consistently lustrous even with the occasional softness and grain (which remains true to the original theatrical experience).

The cineaste’s favorite home video company has put together an excellent mix of contemporaneous documentaries and television shows focusing on the making of Forsyth’s melancholy comedy.

A new conversation between Forsyth and film critic David Cairns.

Shooting from the Heart, a 1985 documentary about the work of cinematographer Chris Menges

A 1983 episode of The South Bank Show covering the production of the film.

The Making of Local Hero, a documentary made during the film’s production, featuring interviews with actors Peter Riegert and Burt Lancaster.

I Thought Maybe I’d Get to Meet Alan Whicker, a 1983 interview with Forsyth.

An essay by Jonathan Murray, film scholar at Edinburgh College of Art.