Tom DiCillo’s satire about the pitfalls of low budget filmmaking is less farce than it is a loving valentine to the difficult task of getting something relevant on film. Steve Buscemi is the frustrated director, Catherine Keener the insecure actress, and Peter Dinklage the little person not pleased that he’s been hired to play a phantom in a dream sequence. Hilariously clever, the show also has a big heart. 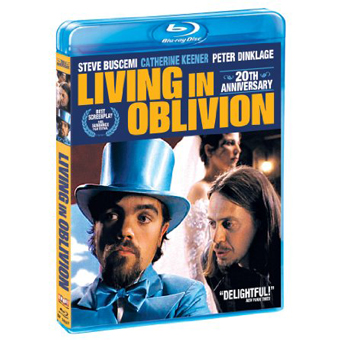 A charming, insightful comedy about life on a low budget movie set, Living In Oblivion captures the giddy hopelessness of seeing one’s artistic aspirations evaporate in the face of breakdowns, compromises, and emotional chaos. Steve Buscemi plays a director trying to express a personal story, but nothing seems to go right between the words ‘Action’ and ‘Cut’. Tom DiCillo’s second feature effort won him a long film career. The film plays as if DiCillo had not a single problem during shooting. 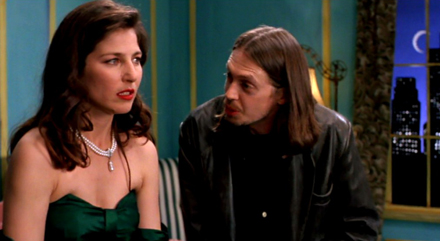 Not so the frustrated independent director of Oblivion’s movie-within-the-movie, Nick Reve (Steve Buscemi). Nick can’t get his simple ideas down on film no matter how hard he tries. His leading lady Nicole Springer (Catherine Keener) is doing fine, but having doubts about her talent. His cameraman Wolf (Dermot Mulroney) is a preening fool who wears an unnecessary eye patch, just for show. Wolf lets his work be affected when his girlfriend Wanda (Danielle von Zerneck), the first assistant director, says she’s through with him. And Nick’s leading man Chad Palomino (James LeGros) is a womanizing ignoramus who specializes in bedding the talent and making a nuisance of himself on the set. If Nick could just get a decent shot in the can, just one good take, things might get better.

Living In Oblivion is funny all right, and if you’ve ever spent time on the set of a cheap movie, it’s painfully accurate. Even Ed Wood Jr. was able to get a ‘vision’ onto the screen, maybe because his standards were so low. Poor Nick Reve has an insecure cast and a somewhat surly crew. Even though nothing he’s shooting is particularly difficult, everything seems out of his reach. Small glitches require retakes until the actors no longer feel their roles or remember their lines. Camera flubs, boom mikes in the shot, extraneous noises, the beeping of a wristwatch conspire to ruin takes. Then Nick must sit and die, while an un-filmed rehearsal plays out like the best scene ever written and acted, in front of his idle camera. Director DiCillo tells us that the Oblivion of his title refers to the bubble of concentration that happens on a film set. With all effort and energy being expended on the film, it’s as if the world outside ceases to exist. 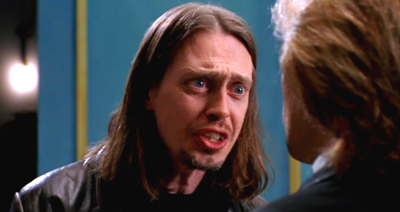 Living In Oblivion has some expressive tricks up its sleeve. We see the first morning’s disastrous shoot in B&W, with only the moments when the camera is rolling, in color. That’s all revealed to be a dream. The next section of the film reverses that setup, with the filming in color, and the actual scenes being filmed, in B&W. Full relationships and personalities are slowly revealed. Nicole has made the mistake of sleeping with her ‘name’ co-star Chad Palomino. This proves fatal to their chemistry when he badmouths her on the set. For his part, Chad is a total dolt who can’t act and has terrible instincts about everything. His lame ideas ruin Nick’s creative momentum. Chad reinvents scenes to favor himself, all the while feigning a phony rapport with the crew. He’s the perfect example of the curse of a star attitude.

We see Nick trying to film three simple scenes, and of course they’re all disasters of one kind or another. Thankfully he does have a magical moment when it all comes together, at least once. Nick’s dream sequence falls apart when his little person actor Tito (Peter Dinklage) has a conniption fit over the concept. Tito’s tirade is perhaps the best speech ever about what a minority has to put up when his ‘type’ is represented in a movie: 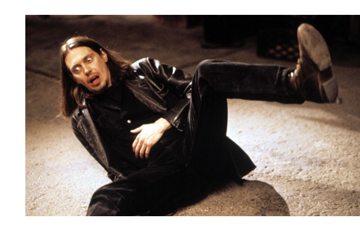 When Tito walks out, it’s as if Nick can do no right. His movie has deconstructed itself during filming, element by element. The other ‘oblivion’ that Nick experiences, is the dread fear that all is lost, that one’s supposed talent is an empty mirage.

It all works because DeCillo’s screenplay concentrates on the personality issues that militate against people working together in such intimate circumstances. Everybody is either insecure about what they’re doing, or absorbed in problems not having to do with the movie. The ‘biz’ requires them to affect poses, as with the cameraman’s fake eye patch. Resentments grow in this garden of Egos. As much as he tries to maintain an even keel, Nick’s creative frustration causes him to break down, too. Just as his key actors are quitting, Nick’s senile mother wanders in, escaped from her assisted living situation. She wanders onto the set during takes.

Director DiCillo’s screenplay is refreshing and inventive, something unusual in the behind-the-scenes moviemaking sub-genre. Some of the acting is a bit obvious, but the right spirit is there to overcome the broader moments. Living In Oblivion was a genuine independent hit, and certainly core viewing for Steve Buscemi fans. His Nick Reve begins with a mental state just positive enough that creative harmony could occur… and is clobbered with one soul-crushing problem after another. Yet it’s all hilariously engaging. Nick Reve should be the Patron Saint of every harried young film director, unhappily in over his or her neck. 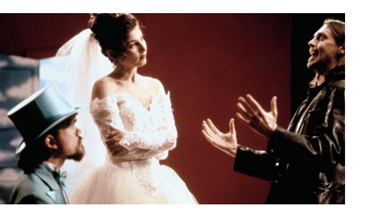 Shout! Factory’s Blu-ray of Living in Oblivion improves mightily on Columbia Tristar’s much earlier DVD. The image is excellent throughout on this somewhat minimalist production, which takes place almost entirely on a tiny rented soundstage. Even in the cramped setting the visuals are consistently interesting and attractive. The switches between color and B&W generate interest in themselves.

Shout! pours on the extras. Thirty years later, most everyone from this film is still active and eager to revisit the experience. The forty-minute plus documentary In Our Own Oblivion has the participation of all the lead actors save for Ms. Keener and Dermot Mulroney. DeCillo and his producer explain how the show was initiated as a 20-minute short that was then expanded. The writer-director studied the section already filmed, to find elements to extrapolate further. Production continued when two of the cast members ponied up the additional needed budget. DiCillo is a very theatrical guy in his interview, but also comes off as sincere and honest.

Tom DiCillo and Buscemi sit for a Q&A in another video extra taped at a 2002 film festival. One deleted scene is offered as a separate menu item.

The added DVD disc contains all the same set of extras. The package cover design showcases Peter Dinklage in his blue tuxedo and top hat for the dream sequence. It’s a good call — everybody remembers Peter’s scene first.