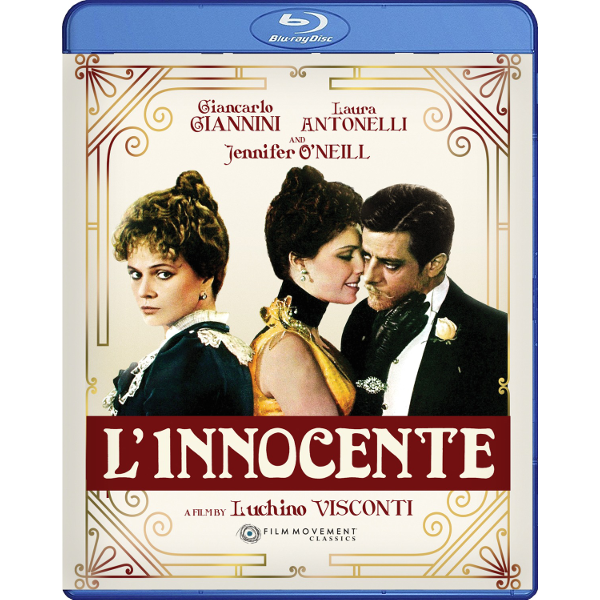 The availability of European art cinema became spotty in the 1970s, even if Fellini and Bergman were aided by the vigorous distribution of Roger Corman’s New World Pictures. Many noted pictures we enjoyed at festivals like FILMEX were not seen again until the arrival of Home Video and cable stations like the ‘Z Channel.’ Luchino Visconti’s final film is a near masterpiece that had to wait three years for import to the United States. By no means was Visconti always welcome in the United States — some of his best pictures (Senso, The Leopard) were raggedly cut and poorly dubbed. Others were not shown here at all. And his previous picture Conversation Piece had been very badly received, both in the 1975 NY Film Festival, and then on a belated, poorly reviewed arthouse release in 1977.

1976’s L’innocente was being edited when Luchino Visconti died of a heart attack; star Giancarlo Giannini supervised the completion of the editorial process.  The movie wasn’t enthusiastically received in Europe; what with the negative reception of Conversation Piece, it didn’t arrive here until 1979, when it finished up a Visconti retrospective at the Lincoln Center — and became a hit.  Shorn of a reel, it did very well when released in New York arthouse theaters, drawing crowds for months. The same critics that condemned Conversation Piece declared L’innocente a terrific final film for Visconti.

The story unfolds in La Belle Epoque, among the Italian aristocracy. Free from bourgeois concerns like making a living, the main players enjoy endless luxuries and leisure time. Unoccupied villas — large estates — are maintained by servants on the chance that the owners might drop by for a while. In Rome, handsome Tullio Hermil (Giancarlo Giannini) is married to Giuliana (Laura Antonelli) but thinks only of his own convenience. He doesn’t hesitate to inform her that he no longer loves her like a husband. His passion is now the wealthy widow Teresa Raffo (Jennifer O’Neill). He would really prefer that Giuliana remain his wife, as that would make things a lot easier for him as he escorts his new mistress to grand restaurants, etc..

Tullio apparently has the power to do this, to abandon Giuliana without abandoning her. She retreats in confusion, trying to maintain her composure. He’s aggressive at his fencing lessons and unreasonably territorial about Teresa’s company — when the older Count Egano (Massimo Girotti) ignores Tullio’s orders to stay away, he challenges the man to duel. Tullio continues to humiliate Giuliana in public. He doesn’t change his tune until the fickle Teresa toys with his affections, and momentarily sends him packing.

Upon hearing that Giuliana has been conducting a social life of her own, Tullio suddenly wants her again. He rekindles their amorous relations but a big problem arises: when Giuliana was left alone and bewildered, she got carried away with a noted poet (Marc Porel) and is now pregnant. The anti-Catholic Tullio can’t abide a baby that will forever remind him of a rival. He wants Giuliana to abort, but she can’t do it. Tullio poisons the atmosphere in his house while awaiting the baby. To make Tullio happy, Giuliana pretends that she doesn’t want the baby either… His mother (Rina Morelli) and his pleasant brother (Didier Haudepin) know something is very wrong.

L’innocente is superior filmmaking and quite beautiful to behold. Visconti’s cinematographer and designers deliver amazingly expressive interiors; in widescreen Technovision the villas and salons look like epic scenery. Even more amazing are the colorful and interestingly designed costumes, some of the most attractive period dresses I’ve seen. In most movies we don’t believe the women even know how to get in and out of all those garments; here we see that servants are in attendance to help the fashionable Giuliana and Teresa change two, even three times a day. Their dresses look lived-in, yet incredibly elegant.

With his piercing eyes and cruel mustache, Tullio oozes patrician macho arrogance. He frequently rationalizes his philosophy, which boils down to egocentric self-gratification. Visconti’s characters don’t usually self analyze through dialogue, so the monologues are the weakest part of the show. A little later, the good-natured brother gives up trying to get Tullio to consider the absurdity of their world of unearned privilege and luxury.

Laura Antonelli’s patient society wife Giuliana is as faithful as a dog and willing to forgive Tullio anything. She suffers, but not in total innocence; she confesses that her brief (off-screen) affair with the poet happened almost without her conscious involvement. When Tullio re-avows his undying devotion, we don’t buy it for a minute. But Giuliana does, and blames herself for everything… a credible reaction considering this society’s double standard.

Jennifer O’Neill’s wealthy playgirl Teresa is an independent spirit who won’t be anybody’s lapdog. She enjoys the ardent attentions of men, and favors Tullio even as she torments him for expecting her to play the obedient mistress. Their affair couldn’t be more out in the open, and Teresa doesn’t mind blowing up Tullio’s marriage. Yet even she sobers up somewhat, after hearing Tullio’s full account of what has happened.

The movie has one lovemaking scene where Laura Antonelli undresses as in her sexy farces; here she must endure Tullio’s warped philosophy while he paws and caresses her. It’s legit drama and certainly beautiful, but it still seems included to give the film a commercial boost — Antonelli’s name on a marquee signaled certain expectations. Perhaps we needed to be reminded that these jet-setters avant la lettre were able to get clear of the complicated layers of clothing they wore, with all those loops, stays and buttons.

The last act is deeply disturbing. As soon as we know the direction the film is taking, much of the pleasure of watching drains away — there’s no longer anyone to root for. The tragic crime depicted must have been common enough, and our only relief is knowing that the perpetrator recognizes his folly at the end. But it’s still a serious downer. Not only do we not exit smiling, the beautiful images and fine acting we’ve seen tend to diminish in the memory.

We’re told that one reason Visconti chose this book over another by the same author is that it could be filmed mostly indoors in controlled conditions; the director was already quite frail. His stated first-choice stars Alain Delon and Romy Schneider were unavailable. He ended up with the then-hot Giancarlo Giannini, of Lina Wertmuller’s Love and Anarchy and Swept Away. Laura Antonelli was a reigning Italian star in sexy comedies; Jennifer O’Neill had made a big impact in the hit movie Summer of ’42.

L’innocente helped make Laura Antonelli an arthouse sex star in America — leading to U.S. releases of her previous films Wifemistress (1977), Til Marriage Do Us Part (1974), and Malicious (1973).

Ray Harryhausen fans take note: fencing master Enzo Musumeci Greco has two scenes in the film. We all remember his mime-sword fighting as a skeleton in you-know-what.

Film Movement Classics’ Blu-ray of L’innocente is a visual dazzler. Technovision is a name for a European 35mm anamorphic lens of very high quality; even in wide shots details look impressively sharp. The show was of course impressive on a large screen, but on low-res DVD the many wide shots had us straining to identify characters. Visconti uses a zoom lens, but not as freely as in his zoom-happy The Damned (La caduta degli dei)  and  Death in Venice. Our gaze is encouraged to explore new rooms in these mansions — as when a side alcove in someone’s salon reveals a gigantic hallway fit for a palace. ( ↑ ) Teresa says she likes Tullio’s house, and she strolls by a pillar that must be eight feet in diameter. Visconti himself had a noble name, and surely enjoyed special access to these incredible locations… the celebrated rich décor of Vincente Minnelli movies looks like rented furniture next to the opulence seen here. 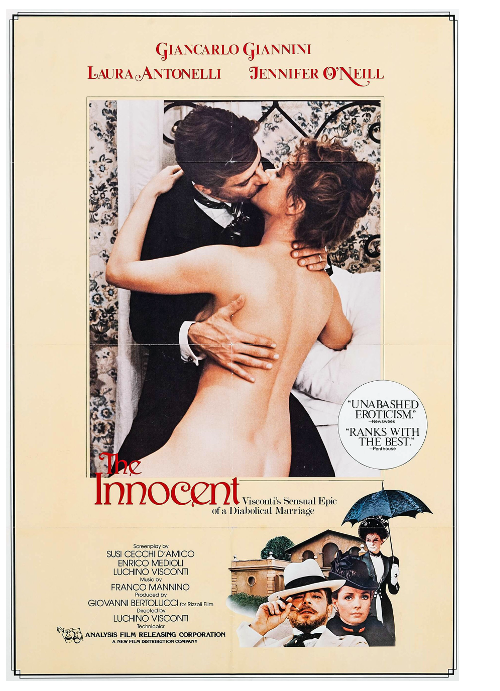 Music plays as important a role in this film as it does in Visconti’s Death in Venice. These Roman socialites dress up to attend classical recitals, presumably by artists and musicians living on patronage. But the real business conducted is social — seeing who shows up with whom, etc.. Giuliana is lectured by a hostess-princess to tough it out — even if she’s being cheated on, she must put on a show of strength. Meanwhile, out in the hallway Teresa is furious that Tullio has brought his wife, and retaliates by leaving with the eager Count Egano. It’s obvious that Tullio’s brash attempt to possess and control two women is not going to turn out well.

Film Movement gives us a 12-minute video essay by the Visconti expert Ivo Blom, who points out images carefully composed with artworks that express the characters’ thoughts, as when a painting of a child is frequently seen with the distracted Giuliana. A shot of Tullio seen in a mirror, with a baby and a painting of Jesus, is also telling. Blom also focuses on a classical (or operatic?) musical choice, that informs Giuliana’s unseen love affair with the poet.

The directory also lists a 16-page booklet with an essay by Dan Callahan, which wasn’t included in my particular review copy. Callahan’s writing elsewhere has always been exemplary.

Written with an assist and corrections from “B.”