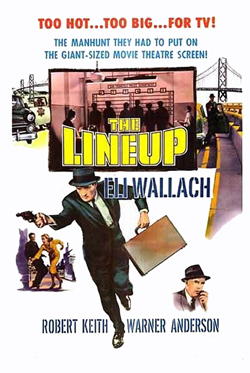 Warner Anderson, star of the long-running early fifties TV show The Lineup, repeated his role in 1958’s big screen version but the real stars of director Don Siegel’s brutal thriller were Eli Wallach and Robert Keith as a pair of sociopathic crooks and, of course, Siegel himself who masterminded several lethal set pieces including the hair-raising climax (involving a chase on an unfinished freeway). Seasoned TV writer Stirling Silliphant (Route 66, Naked City) was responsible for the screenplay and cinematographer Hal Mohr (The Wild One, Destry Rides Again) lensed the appropriately gritty black and white San Francisco landscapes.