There’s no movie quite like Robert Rossen’s adaptation of the J.R. Salamanca book: mental illness and disturbance is neither simplified nor jammed into a preconceived pattern. There is a strong mythical element to Jean Seberg’s enigmatic Lilith, who at times seems the breathing incarnation of elemental human forces — I would imagine the Greeks believed certain ‘disturbed’ persons to be inhabited by the Gods. The equal star of the show is the cameraman Eugen Schüfftan, an artist whose near-expressionist images fill the imagination. 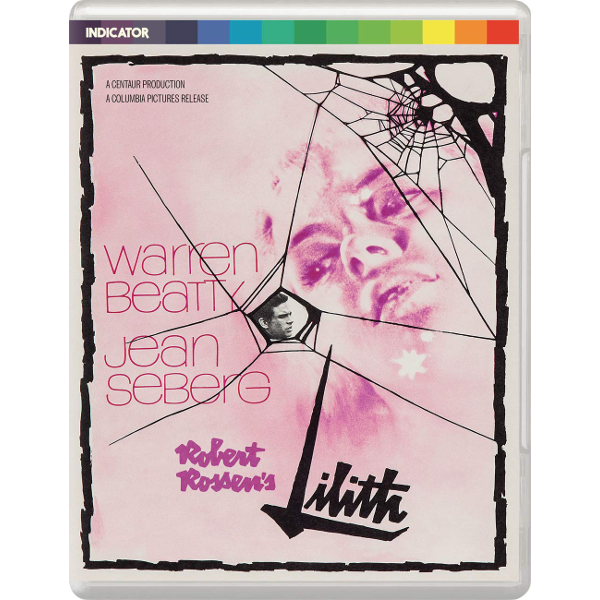 Writer/director Robert Rossen’s Lilith has been admired by critics ever since it was new; it and Arthur Penn’s Mickey One are the Odd Movies Out in the early career of star Warren Beatty. I don’t know of another film that deals as directly with everyday madness, as seen in asylum patients that are outwardly reasonable. The ‘rest home’ here caters to the very wealthy, and we wonder if some disturbed patients have been parked there as much for family convenience, as for medical reasons.

Lilith is really a psychological ‘horror of personality’ film, just more subtle than a shock show like Hitchcock’s Psycho. It’s about a patient with a magnetic personality and a knack for manipulating men. Warren Beatty is the seemingly disturbed man who becomes an asylum worker. In what must be her most complex role, Jean Seberg is devastating as a woman described more than once in mythical terms. She’s even compared to a mad spider, that weaves ‘crazy’ webs. How does one judge madness?   For all we know the ‘crazy’ spider web is more efficient than a standard web — creatures might not recognize the eccentric pattern and be more easily snared. Seberg’s Lilith Arthur seems the same kind of creature. Sympathy draws the counselor in, only to be ensnared by lures he cannot resist.

It’s likely that two things helped Robert Rossen get this very disturbing, very atypical studio drama greenlit. His high-powered drama The Hustler was a prestige hit in 1962, and 1963 brought the sleeper success of David and Lisa, Frank and Eleanor Perry’s rather stylized asylum drama. Lilith’s strongest asset is the sight of magical actress Jean Seberg, as photographed by the legendary cameraman Eugen Schüfftan (Eyes Without a Face). The movie is often compared to the French New Wave, but Schüfftan’s most affecting shots are canted toward expressionism. Several double-exposed scenes express the rapture of sex far better than does a graphic sex film, reaching rare heights of ethereal mystery.

Otherwise, Rossen’s opaque screenplay is likely to leave many viewers wondering what the heck is going on. Instead of building on its unusual tension, Lilith meanders to a curiously unsatisfying end. The expected firestorm when the asylum supervisors discover what’s going on, never happens. The finish is both appropriate and logical — yet we’re slightly frustrated because the filmmaker refuses to simplify the personalities involved. Are relationships real and concrete, or are even ‘sane’ people constructed on psychological quicksand?

The story starts with a young man applying for a job. Once again living at home, troubled ex-soldier Vincent Bruce (Warren Beatty) takes a counseling position at a private mental hospital. Dr. Bea Brice (Kim Hunter) encourages Vincent to stay on the job despite his self-doubt. Despite his best effort at detachment, he soon becomes emotionally entangled with a patient, the attractive, enigmatic Lilith Arthur (Jean Seberg). Stephen (Peter Fonda) is another patient hopelessly in love with the manipulative, mysterious woman. Vincent breaks all the rules to be with Lilith, an obsession that erodes his personality.

Lilith is all the more interesting for having been made at a time when Hollywood had a low tolerance for exotic filmmaking. But even critics who championed Rossen’s originality were puzzled by a film that refused to simplify complex people down to 12-year-old terms. Some of the lack of clarity and direction was blamed, rightly or wrongly, on young actor Warren Beatty. The moody Vincent Bruce seems conflicted in most every scene yet we never understand what his problem is. His only training is on-the-job experience, and he comes off as entirely too dour and impressionable to perform his duties. Kindly asylum chief Kim Hunter seems so convinced of Vincent’s suitability, we wonder if she has her own personal interest in the handsome young man. Considering how easily the well-meaning Vincent is destabilized, we understand why asylum counselors would have to keep a tight reign on their empathies, even if it means staying at a ‘clinical’ remove. Vincent’s a sitting duck for the manipulative Lilith.

Vincent wins praise for pulling the unresponsive Lilith out of her shell of silence. But he spends so much time alone with her in her room that warning bells should be ringing all over the hospital. The movie is supposed to be about the influence one personality can have on another, but we are just as concerned about the murky ethics involved when Vincent and Lilith become lovers. What Lilith considers an iffy gray area has become a bomb crater, as (I imagine) having sex with a person considered clinically unstable is comparable to sex with a minor. Entire establishments have been discredited or closed because of ethics violations. I doubt that beautiful female patients anywhere are granted unsupervised private time with handsome counselors — I see video surveillance creating more problems than it would solve, adding to the sense of paranoia.

If the Vincent character is a troubling question mark, Jean Seberg’s Lilith is a unique character brilliantly realized. She’s both a victim and a predator. She embodies a theory voiced by the chief doctor (James Patterson), that schizophrenics are superior personalities out of sync with the normal world. The artistic Lilith writes slogans on her wall in her own personal language. She comes to vibrant life when in contact with nature. In perhaps the film’s most beautiful sequence, she hikes up her dress to walk in the shallows of a pond and leans over the mirror-like surface to kiss her reflection. Cameraman Schüfftan makes this scene conjure thoughts of classical Greek mythology, where fantastic beings seem to represent aspects of the human personality. We can all be seen as magic and mystical in some ways; it’s a major reason we fall in love with each other. But letting an elemental creature like Lilith loose among normal insecure mortals… the damage she can cause is scary. 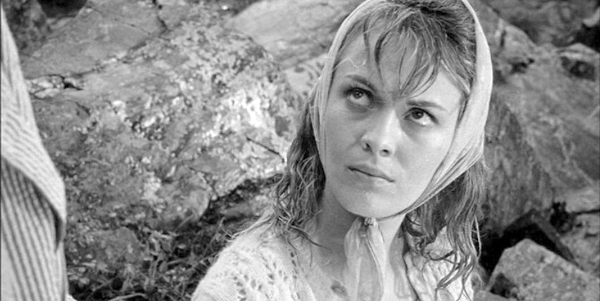 Lilith’s sexual spell communicates directly to Vincent, who is an easy mark for her forceful personality. She sometimes seems devious and manipulative, but her appeal is compellingly direct: she doesn’t telegraph her intentions. She evades answering questions, but she never lies. Critics were impressed by the film’s depiction of Lilith’s lesbian association with another patient played by Anne Meachum (Seizure), a relationship that Lilith flaunts to further disturb the defenseless Vincent. They attend a Renaissance Faire, where Vincent observes Lilith whispering who-knows-what into a little boy’s ear… he seems quite surprised. They then encounter a jousting tournament, and the mousy Vincent suddenly picks up a lance and becomes a mounted Lochinvar. Lilith plays the role of his garlanded fair maiden, and the patient-counselor relationship suddenly becomes a full-on love affair.

Robert Rossen’s direction is masterly, taking an entire different approach than his earlier pictures. The film has its own pace, that neither rushes things nor caters to specific performances. Rossen is aided greatly by the editing of Aram Avakian, a budding genius who cut Penn’s The Miracle Worker as well as Coppola’s You’re a Big Boy Now before moving on to direct the indescribable End of the Road and the quirky Cops and Robbers.

The film doesn’t conclude as much as it unravels. The professionals at the asylum project genuine professional concern, but they seem more like caretakers than doctors with a goal. Peter Fonda’s pitiful patient Stephen follows Lilith like a puppy and makes gifts for her in his crafts class. The apparently unhinged Vincent cruelly returns Stephen’s gift, as if jealous of Lilith’s attention. The ensuing tragedy emphasizes the mysteries of the human personality, but we’re also concerned about the appalling lack of proper supervision at this fur-lined snake pit for the rich. The best thing about Lilith is that it retains its sense of human mystery. We too are seduced by the amazing Lilith/Jean Seberg, and like Warren Beatty struggle to ‘read’ the magical expressions that flow across her face. Sometimes it doesn’t pay to examine the faces of those we love too closely. What if we become confused as to whether they’re being candid about their feelings?  What if we begin to intuit hidden, unattractive qualities?

Warren Beatty plays Vincent as a mass of unfocused attitudes, and to viewers not particularly enamored of his acting tics, his indecisive hemming and hawing will soon become irritating. In a sidebar subplot Vincent asks for more trouble by rekindling the interest of Laura, an old girlfriend now married (Jessica Walter of Grand Prix and Play Misty for Me). Vincent loiters around Laura’s house and spends an awkward few minutes with her husband, who seems to intuit that Laura and Vincent want to be alone. The scene is seemingly engineered to provide a showcase for blooming talent Gene Hackman. Perhaps this is where Beatty got the idea of teaming with him for Bonnie and Clyde. Peter Fonda’s rigid acting skills are cleverly used to augment Stephen’s cramped persona. Rene Auberjonois is visible in a smaller part. The interesting Ben Carruthers (A High Wind in Jamaica, The Dirty Dozen) has a standout scene as another patient and Olympia Dukakis is in there somewhere as well.

Something makes me think that Frasier’s wife in the original Cheers TV show was named Lilith as an inside joke to this movie.

Powerhouse Indicator’s Blu-ray of Lilith finally allows us to see Eugen Schüfftan’s brilliant, mesmerizing cinematography at its full power. He aids and abets Robert Rossen’s mythological themes. Lilith’s POV of Vincent through the metal screen on her window, precedes our first views of her in that same window. Long shots of lawn furniture on the asylum’s beautiful grounds remind us of visuals in Last Year at Marienbad. The images of Jean Seberg are just lustrous — she seems a creature aligned with mist and water.

The solid mono sound puts Kenyon Hopkins’ score front and center. The music never explains what we see, but instead provides moods. It clarifies the dismal reality of walking through town on a rainy day, and adds excitement to the jousting scene without taking us on a trip to Hollywood.

The extras give us two new featurettes by woman critics. Amy Simmons’ illustrated lecture might be a term paper on so-called mad women in Lilith and the split-personality movies Lizzie and The Three Faces of Eve. The theme returns that Lilith is institutionalized simply because her personality and actions won’t adjust to the rigors of conventional repression. Pamela Hutchinson’s quick bio sketch of Jean Seberg will inform newcomers of her interesting career launch, the fitful series of movies she made, and the sad final chapters of her life. The bizarre trailer tries to play up the sex angle. The tagline from the theatrical release was “Irresistable. Unpredictable. Homicidal.”

Powerhouse often taps the store of Guardian interviews and here comes up with one for Warren Beatty, from 1990. He’s very eager to explain all of his work.