When Alfred Hitchcock films are praised, this 1944 picture tends to get overlooked. Yet it hooks and holds audiences as strongly as any of the Master’s classics. When a handful of English and Americans are lost at sea, survival depends on their ability to cooperate. Can they trust the experienced sea captain — a German — who joins them? And when things become grim, will their behavior be any better than his? 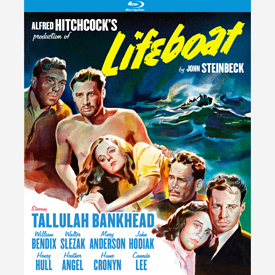 Hitchcock goes to war, this time for 20th Fox; like his compatriots Powell & Pressburger, instead of a straight-on combat picture he makes an ‘appraisal’ film about the state of American unity. Some of the reviewers found this show distastefully anti-American, what with characters set up to represent Capitalism and Communism, plus strong content like the death of a baby. But it’s one of Hitch’s best movies, at least from the humanist point of view. As with his Shadow of a Doubt, behind the technical trickery is a strong feeling for the humanity of his characters.

Lifeboat shows the director at his most creative, challenging himself by making an entire film within the confines of one open, crowded boat bobbing on the high seas. We see very few conventional shots, by 1944 standards. Almost the entire picture is a visual experiment played out in front of rear-projection process screens.

There’s nothing quite like Lifeboat among movies made during the war. Although it has a fairly upbeat finale, the film presents an unusually negative view of humanity. The group of survivors is literally ‘all in the same boat’ and eager to survive, but the rather critical screenplay, finessed by Hitchcock himself, doesn’t proffer any sentiments about adversity bringing out the best in people.

When their steamer is torpedoed, nine survivors find their way to a solitary lifeboat. They’re eventually joined by a German sailor, the captain of the submarine that sank them and was itself sunk. A crisis develops: the German is the only qualified navigator, but can he be trusted to steer them to Bermuda and not his waiting U-Boat supply ship? 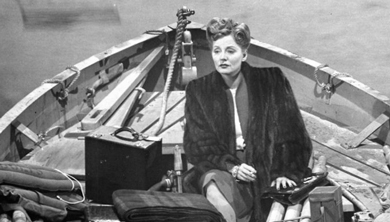 Before you can say ‘microcosm,’ the lifeboat collects a cross-section of wartime allies, a sort of civilian platoon. Sophisticated reporter (Tallulah Bankhead) never got wet, but various swimmers make their way through the flotsam: a business tycoon (Henry Hull), an ordinary Joe with a severe leg wound (William Bendix), concerned nurse (Mary Anderson), English radioman (Hume Cronyn) and black steward (Canada Lee). There’s also a holdover from ‘thirties social movies, a disgruntled Communist laborer (John Hodiak). That type, directly named, became extinct in wartime movies … the last one we remember was Bob Cummings in The Devil and Miss Jones. Hollywood (and Washington) turned away from pro-Soviet films soon after launching some really embarrassing examples. Given main title credit is the great writer John Steinbeck, who only turned in a treatment for Lifeboat. In the wake of The Grapes of Wrath Steinbeck had already become a vaguely suspicious person, politically speaking. Canada Lee was later blacklisted as a Hollywood Red.

But Lifeboat’s few sniping remarks about bosses and Bolsheviks only reflects natural animosities between characters. The script avoids Dalton Trumbo’s wartime cliché of having the group express lofty hopes for a better, one-world kind of future. The present crisis is what’s important. Although the movie doesn’t fully communicate the abject misery of being stuck soaking wet in an open boat on the high seas, the desperation and stress of the shared predicament is the main focus. 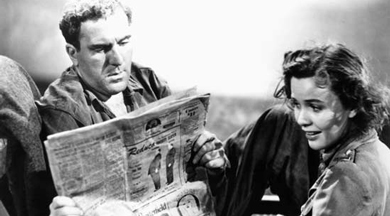 The picture opens with a Steinbeck shock that had to be deleted from the filmed conclusion of The Grapes of Wrath — the death of a baby. That wasn’t considered fit subject matter at the time, and although there are other exceptions (Penny Serenade) they’re usually off-screen downers that cloud an entire picture with grief. Lifeboat uses the death to let us all know the picture means business; that it won’t be a three-men-in-a-boat romp. I guess Hitchcock figured, ‘well, I’ve already blown up a little kid in a London bus…’

Excellent dialogue delineates the characters along conventional theatrical lines, but without soliloquies or position oratory. The script is shrewd enough not to let his group explain themselves in pat speeches or heartfelt confessions. We instead get to know them better through bits of action and little hints doled out one at a time. The British radioman (Hitchcock pal Hume Cronyn) isn’t serving tea, and I’m not sure if Canada Lee smiles, even once. The millionaire may be habitually dismissive of his black boat-mate, but isn’t ostentatious or overbearing. The only ‘Hollywood’ character is the smart-talking Tallulah Bankhead, first seen luxuriating in a mink coat and peeved over a ripped nylon. As can be expected, she’s deprived of her niceties one by one, a process perhaps aimed at complacent women in the audience, like the Merry Widows in Hitchcock’s previous film. War propaganda of course stressed making sacrifices but average American civilians mostly weathered annoying inconveniences. Hitchcock doesn’t stress it, but normal audience members surely react to the spectacle of all these valuables being lost over the side. One of the survivors commits suicide by going over the side – and we’re very aware that she did so wearing Bankhead’s costly fur coat. 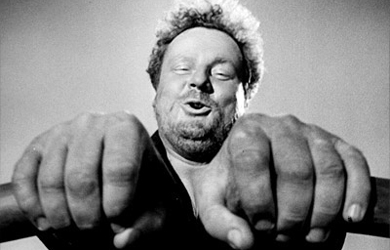 Later disaster movies would become circuses, encouraging hammy scene stealing by supporting actors making the most of their roles. The characters in Lifeboat unwind their personal lives just enough to sustain our curiosity. The bulk of the screen time is reserved for the difficult group decisions. In terms of wartime politics it’s significant that the supposedly democratic system is only a formality. Electing a captain becomes a case of tough guy intimidation. The freezing, starving passengers eventually put their trust in the enemy captain, at which point the previous self-appointed leader becomes discouraged. Only slowly do they realize how much the German is hiding from them. True, he does seem superhuman, cheerfully rowing all day.

The acting is excellent all around. Exuberant Walter Slezak and Henry Hull are uncommonly subdued, with Slezak giving a marvelously shaded, subtle performance. William Bendix is loveable without tugging at our pant legs. Hitchcock must have carefully chosen his ensemble and then trusted them to follow his general guidelines — there are no mad dashes for Oscars, although Bankhead’s showy star turn would invite them. The stage (and tabloid) legend made a lot of terrible movies, and must have counted herself lucky that this most visible feature shows her at her best. This is also probably John Hodiak’s finest hour, as well as a fine opportunity to see Canada Lee, who only made a handful of pictures before disappearing from the screens in the HUAC years.

Nobody remarks on Heather Angel or Mary Anderson, the doomed mother and the optimistic nurse. Whenever Mary Anderson is discussed, nobody remembers her fairly amazing part in Cy Endfield’s ‘subversive’ noir The Underworld Story, where she plays a black maid framed for murder by a publisher and his son, and callously used by an opportunistic journalist and a crooked lawyer. This is probably her best movie role, but the noir is surely her bravest. 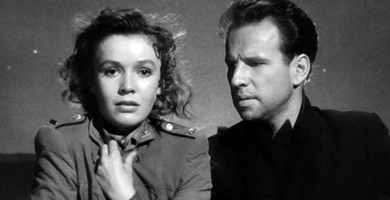 Lifeboat wraps up with some extreme dramatics. The only dated business is Bankhead’s caustic laughter as she realizes she’s lost everything. Her fur, camera, typewriter, suitcase and a pricey diamond bracelet have slipped away, and now she may lose her life as well. For the other social climax Steinbeck chooses a really daring development, the transformation of the survivors into a murderous lynch mob. There is plenty of provocation, but their action is still ugly in the extreme. Lifeboat shows that war’s first casualty is human decency — I wouldn’t be surprised if Ingmar Bergman meditated on this scene for his powerful war movie Shame.

Lifeboat is also an example of Alfred Hitchcock making excellent use of the studio resources available at a precision film works like 20th Fox. The fact that he was able to shoot it all on a soundstage is quite an achievement … working with process screens is a time consuming and frustrating technical challenge. Usually all process angles had to be tested before filming, and Hitchcock keeps his camera popping all around the boat, up and down, left and right. The cameraman must have worked out a special system. I wouldn’t be surprised if they had more than one boat set and more than one process setup, so as to speed the process work along.

We eventually accept the rear-projection illusions without question. The shoot must have been a physical ordeal for the actors, but we’ve heard few stories of grousing, as did Noël Coward on having to play an entire movie (In Which We Serve) soaking wet in a water tank. But the crown of genius again goes to Hitchcock. Having so few cutaway possibilities severely limits what he can do with his camera, and it’s remarkable that nothing seems forced or compromised. We forget about everything but the drama. 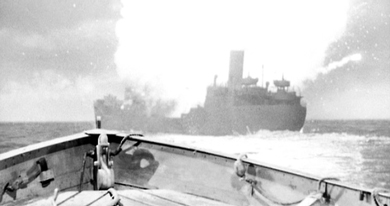 The KL Studio Classics Blu-ray of Lifeboat is a much-improved follow-up on their 2005 special edition. The new scan of the film is crisp and accurate; about the only visual drawback are a few night sky effects that look milky — and might have been that way in original prints.

Kino deepens Fox’s stack of extras. Drew Casper’s informative older commentary is delivered in his rather dramatic style, like a class lecture trying to inspire awe in the students. Also repeated is an older Fox DVD making-of featurette, which conveys safe production stories filtered through the studio lawyers.

A welcome extra is the eleven-minute audio excerpt from François Truffaut’s research tapes with Hitchcock, for his famous book. The director is happy to delineate the full chain of writers on this picture — John Steinbeck, MacKinlay Kantor, Jo Swerling, Ben Hecht — possibly because he did the final polish personally. Hitchcock also compliments his producer, Kenneth Macgowan. For a visual background for Truffaut’s old tape, Kino adds a still and ad artwork montage.

Trailers are included for other suspense thrillers, with a video promo for Lifeboat.

And then there is the newest extra, a full commentary from Tim Lucas. This year he must be turning them out one a week, they are so frequent. As Alfred Hitchcock isn’t necessarily a name for which Tim has an entire file of incredible personal research, it’s more of a conventional commentary yet well thought out and a great listen. Hitchcock’s script and images are heavy with things to point out, and Tim doesn’t have to stretch when he theorizes about visual connections, or divines the cinematic reasons behind striking compositions. He’s as impressed as anyone by the way Hitchcock manages to keep the confined setting from becoming a bore. I suppose the secret is that it’s simply a polished, intimate play. Hitchcock even has everybody stand up in the lifeboat, without us worrying that the thing will capsize.

We also marvel at how easily Hitchcock diverts our attention from a glaring, glaring flaw of logic. The shifty German fools his captors into thinking the lifeboat is going West, when they’re really heading East. Doesn’t anybody notice where the sun is rising and setting? They can’t all be overcast days.