Jean Cocteau’s film work wasn’t limited to fairy tales and art-house fantasies; this adaptation of his hit play shows us fine theater at its best. A family is a tangle of not-quite-normal relationships that reach an impasse when the emotionally spoiled son seeks to marry — a woman his father already knows. 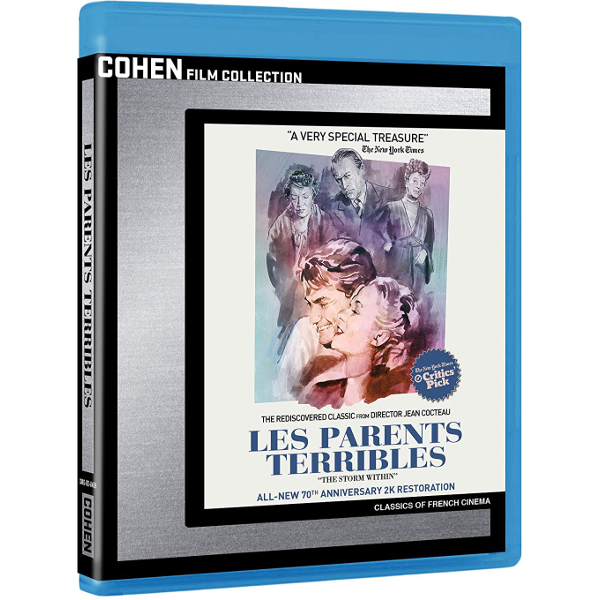 Jean Cocteau’s 1929 novel Les enfants terribles was made into a 1950 movie in collaboration with Jean-Pierre Melville. Cocteau’s later play Les parents terribles has only a vague connection beyond the title — both toy with family relationships that lean toward incest. In the immediate post-war years, just after his smash success La Belle et la Bête, Cocteau solo- directed a successful film of his Les parents terribles (The Storm Within). Although not revived and adapted as often as Cocteau’s one-woman play La voix humaine, the play has been remade several times for films and television.

Audiences expecting more of the fantastic visual poetry of Cocteau’s more famous movies will find instead an exceedingly well-staged and directed ‘straight’ version of his hit play from 1938, which played for more than ten years off and on and continues to be revived. It takes place in two apartments and has only five characters. Instead of opening up the setting, Cocteau concentrates on the performances and drama in a heightened stage-like performance in extremely convincing sets. It’s a stage-movie hybrid; the relationships and blocking are not changed, but Cocteau’s dynamic camera direction adds a cinematic edge.

Although heterosexual in theme the play was once considered daring for its presentation of a semi-incestuous relationship between a mother and son. The description of the main apartment setting as a ‘gypsy caravan’ of disorganized lives, may have been a comment on the disorder of France in the lead-up to WW2. 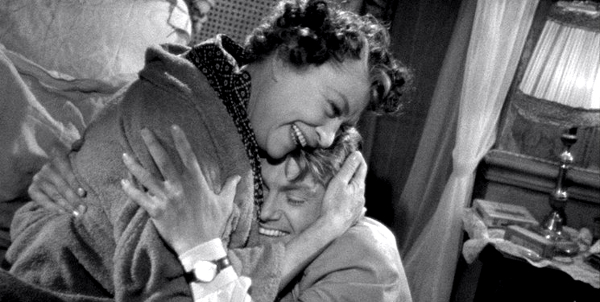 There are plenty of unresolved issues in the household of the middle-aged Yvonne and Georges (Yvonne de Bray & Marcel André). Yvonne is a semi-invalid who does a poor job of self-medicating with her insulin. She has an unhealthy, possessive attachment to her son Michel (Jean Marais), a sort-of-student who has no job and indulges his mother’s emotional games. Also in the house is Yvonne’s sister Aunt Léo (Gabrielle Dorziat), who harbors a long-standing grudge: 25 years ago Léo allowed Yvonne to take her beau Georges away. Yvonne had the marriage and the child while Léo became an old maid. After being gone a full night, Michel returns full of joy to announce that he’s going to marry a woman he’s fallen in love with, Madeleine (Josette Day of La Belle et la bête). Yvonne is immediately upset by the very idea of being ‘abandoned,’ and she throws a tantrum when Michel informs her that Madeleine must first detach herself from an affair with an older man who has been keeping her. But then Georges makes a private confession to Léo: by a crazy coincidence, he is the older man in Madeleine’s life. Abandoned by Yvonne since Michel was born, Georges has turned elsewhere for intimacy. Without telling the others Léo and Georges conspire to break up the young lovers. Their dishonest scheme is only the first of a series of underhanded maneuvers in the ‘gypsy caravan.’

It doesn’t take long to appreciate Les parents terribles. Its crisscrossed net of deceptions benefits from unusually strong characters. Yvonne lives in a fantasy of self-deception in which everyone else revolves around her, and in which her son is her personal emotional property. Léo has apparently stayed close for a lack of options; she no longer wants Georges but frequently wishes a mild revenge on Yvonne. Georges is first seen wearing an oxygen tank, conducting an experiment for one of his inventions. As they’re jammed into a many-chambered but dark and claustrophobic apartment, he can’t be too successful. Yet he has enough money to keep Madeleine on the side. Michel is 22 but still a little boy, with over-emotional responses to everything and a habit of playing with Yvonne as if they were both adolescents. He calls her ‘Sophie,’ which Yvonne only pretends to dislike.

Cocteau was very close to his actors; Yvonne is called Yvonne because he wanted Yvonne de Bray to play the part on stage. She finally made the role her own during the war. The film cast appears to have been most of the stage cast in the ongoing stage production. Everybody is technically superannuated for their part. Jean Marais is 35 playing 22 and Josette Day is 34 playing 25. The older three are a stretch as well. Meant to be at the most in their early 50s, Yvonne de Bray and Gabrielle Dorziat were each 61, and Marcel André 63. But the depth of feeling and nuance of thought that come through this ensemble outweighs concerns of age. When the story is underway, the central coincidence never becomes a negative issue. The characters even remark on what good actors they are, when trying to deceive the gullible Michel. At one point Léo even says that their screwy situation belongs in a play.

The theatrical formalism pays off repeatedly — at least five times in the play, someone makes an observation about life and love that feels honest, even as it’s being billboarded as Words of Wisdom, an ‘author’s message.’ At least in translation, Cocteau’s dialogue feels very natural. Jean Marais’ character Michel sometimes comes across as a big baby, but he has the excuse of being pulled this way and that by his father and aunt’s emotional tricks.

I also kept thinking that the original Les parents terribles might be the kind of self-enclosed play seen performed in François Truffaut’s The Last Metro — it has only five characters and the settings could be minimalized. Assuming that the occupation censors wouldn’t object to Michel and Yvonne’s uncomfortably cozy relationship, it has no overt political message to be censored.

Instead of opening up the play with new locations or characters, Cocteau makes his film seem hyper-realistic in setting. The movie becomes a fine representation of period French rooms packed with furniture, bedding and kitchen accessories; Madeleine’s much neater apartment has an airy skylight and a circular stair leading to a second floor. Although Les parents terribles has the structure of a farce, with attempts to solve family problems with lies and emotional blackmail, it eventually finds a sentimental solution. The older generation opts not to plague ‘the children’ with their own youthful mistakes.

Jean Cocteau narrates, but after one viewing I can only recall his rather cryptic epilogue. George Auric’s music blends in so well, I only remember it in bookend positions as well. I can see how this would be the kind of ‘classic’ high-toned French film that might play repeatedly on European television. It showed in New York and Los Angeles for a few weeks in 1950, and then disappeared forever from the import logs, pushed aside with the later excitement over the New Wave. As with the Cocteau-written H.G. Clouzot masterpiece Les dames du Bois de Boulogne, this show broadens one’s appreciation of Jean Cocteau. 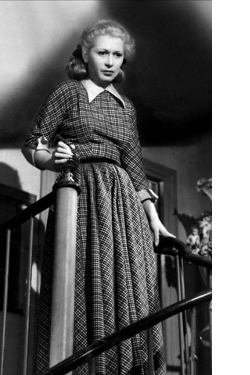 The Cohen Group certainly curates a diverse catalog of film holdings. Their Blu-ray of Les parents terribles is an immaculate restoration. The B&W transfer is clean and sharp, and the audio in fine shape. Many of cameraman Michel Kelber’s tight compositions frame the actor’s faces so nicely, the shots look like fine photographic art. I wish that more pre- New Wave French cinema was available in such a good presentation.

Cohen offers a short interview with assistant editor Claude Pinoteau, who describes his promotion when the first assistant was bumped to a more important job. Richard Peña offers a helpful, brief introduction that places Cocteau in the immediate postwar context, eager for a popular hit to counteract negative rumors about his association with Nazis during the occupation. We also see a selection of camera tests, some of which put Jean Marais opposite a different, unidentified leading lady. Original and reissue trailers are included as well.

Viewers will likely know Marais and Josette Day well, from La Belle et la Bête. Yvonne de Bray has a major role in the 1949 French non-musical Gigi, available as an extra on the Warners’ Blu-ray of the musical Minnelli version. We really like the subtle, expressive Gabrielle Dorziat, but I haven’t seen any of her other major roles.  *

Hello Glenn, In your glowing review of Les parents terribles by Cocteau, you mentioned Gabrielle Dorziat. The popular veteran French actress was a close friend of Cocteau, but also of Chanel and Lucien Guitry, the father of Sacha, Louis Jouvet and Giraudoux. She appeared in over 70 movies, usually as a supporting actress in a juicy part. She was directed by Duvivier, Litvak, Siodmak, Ophuls, Pabst and Decoin before and during the war. Later, she can be seen in Monsieur Vincent, by Maurice Cloche, alongside Pierre Fresnay in 1947. Films by Franju, Litvak again and Decoin in the fifites and several by Clouzot. She shows up in two American movies : Little Boy Lost, directed by George Seaton, in 1952, with Bing Crosby; Gigot, directed by Gene Kelly, with Jackie Gleason in 1961. One her best late appearance is in Un singe en hiver, directed by Henri Verneuil, with Gabin and Belmondo in 1962. Several of these are available for viewing. She was also, through her marriage, Countess de Zogheb, cousin of King Fouad of Egypt. No wonder she was so good often playing snobs, mothers superiors and aristocrats. She died in 1979. Almost 100 years old. Thank you again for your enjoyable contributions. Cordially, Pierre Robitaille.