Michelangelo Antonioni’s pre-international breakthrough drama is as good as anything he’s done, a flawlessly acted and directed story of complex relationships — that include his ‘career’ themes before the existential funk set in. It’s one of the best-blocked dramatic films ever… the direction is masterful. 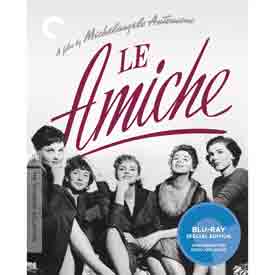 It’s time to stop being so intimidated by Michelangelo Antonioni. His epics of existential alienation La notte, L’eclisse and Il deserto rosso are actually not all that inaccessible, and his breakthrough movie L’avventura is nowhere near as difficult as some people make it seem. In the Antonioni view of life, characters not only have difficulty relating to each other, they seem uncomfortable and out of sorts in all kinds of environments. Eventually they don’t even belong in a film frame, as if they find themselves redundant items in the composition. 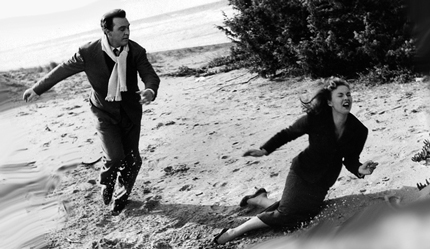 Before L’avventura Antonioni made several dramas that show that his prime themes and preoccupations were already a major part of his work. The earlier Story of a Love Affair is about a murderous love triangle, with the emphasis on its despairing characters, not the crime story. I’m hoping that Antonioni’s Il Grido surfaces sooner than later; it stars Steve Cochran and Viveca Lindfors. Fresh out from Criterion is Antonioni’s 1955 Le amiche (The Girlfriends). It is more or less unknown here in America, yet extremely good. On the surface a conventional drama, it digs deep into the relationships between five fascinating women in Turin.  It’s a story of particular people, but also conscious of issues of class distinctions and a growing sense of dislocation among the well-to-do. The five main actresses are all magnificent. Six years after it was made, Le Amiche received a small release in New York, after the splash made by L’avventura.

It’s quite a movie: elegant, but doggedly realistic. It takes us to a specific time in Italy, during the postwar reconstruction. The ‘girlfriends’ mostly come from wealthy backgrounds, with lives elevated above the struggling working class. 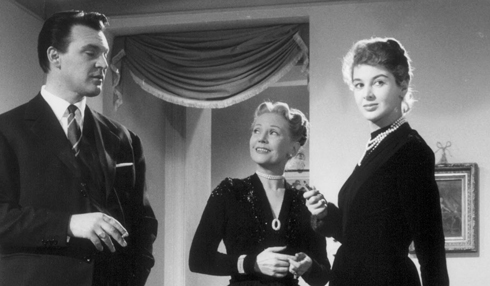 Fancy dress salon proprietor Clelia (Eleanora Rossi Drago) was born poor but made good in the fashion business in postwar Rome. Now she’s building a salon to bring the wares of her boss (Maria Gambarelli) back to her hometown, Turin. Clelia comes to the aid of an attempted suicide, which becomes her entrée into a tight social circle of wealthy local women. The chic Momina De Stefani (Yvonne Furneaux) lives separately from her husband. Considered a bit cynical, she takes lovers at her leisure, and strikes up a casual relationship with Cesare (Franco Fabrizi), Clelia’s contractor. Younger Mariella (Anna Maria Pancani) is a carefree playgirl. Clelia tries to take troubled Rosetta Savoni (Madeleine Fischer) under her wing. The younger woman has fallen in love with her portrait painter Lorenzo (Gabriele Ferzetti), and is despondent because he’s married to Nene (Valentina Cortese), a sculptress. The somewhat domineering Momina encourages Rosetta to get serious with Lorenzo; he has his own problems because he’s jealous that Nene’s art is getting more attention. If that’s not enough, Clelia is strongly attracted to Cesare’s foreman, Carlo (Ettore Mani). It’s a problem because, although they both grew up poor in Turin, Clelia now inhabits a different social stratum.

Le amiche is a superior show on all counts. Most of the excellent cast will be unfamiliar to casual American viewers. Star Eleanora Rossi Drago is frequently mentioned as a top Italian attraction of the 1950s, yet she never had a major starring release here. Her expressive face is perfect for the poised but thoughtful Clelia. I reviewed Drago in Valerio Zurlini’s Violent Summer. Her Clelia is an engaging leading character. As a self-made woman, she has little in common with her new friends, who don’t work and spend their time on social engagements and fashion. Clelia fits in with them because she carries herself well and dresses at their level — but unlike them, she’s had to earn everything she has. We can’t tell what Clelia’s exact story is. When someone asks her if she’s married, the question doesn’t get a straight answer.

Gabrielle Ferzetti and Yvonne Furneaux will be the most familiar names in the cast. Ferzetti has major roles in Once Upon at Time in the West, On Her Majesty’s Secret Service and L’avventura. The drop-dead stunning Ms. Furneaux is most famous for Fellini’s La Dolce Vita, Terence Fisher’s The Mummy and Roman Polanski’s Repulsion. Her Momina is a major player in Le amiche, the slightly older, pushy girlfriend who thinks she knows what’s best for the others.

The interesting Valentina Cortese began in Italy, had starring roles in Hollywood (Thieves’ Highway, The House on Telegraph Hill) and returned to Europe to appear in many important pictures. Here she plays Nene, who is accepted in the group of trendy women because she’s a successful artist and because of her marriage to Lorenzo. Nene’s clothes are tasteful but she’s not a fashion plate like Momina or Mariella. 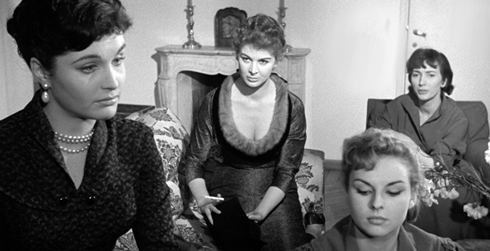 The screenplay portrays these women and their environment in depth. Writer Suso Cecchi D’Amico has her name on scores of classic films by Rosselini, De Sica, Visconti, Monicelli, and Rosi. Antonioni often places several characters on screen at the same time, and his blocking of scenes is some of the best I’ve ever seen. Standard Hollywood techniques seem phony by comparison — after this, Vincente Minnelli’s MGM films seem either lazy or constipated by the CinemaScope format. The characters appear to belong where we see them — when Antonioni’s characters come in from the Turin sidewalks, we never feel that we’ve jumped to a studio interior. Momina’s fancy apartment is far different than Rosetta’s stuffy family home or Lorenzo’s cluttered flat. The wealthy group is always going somewhere in a caravan of cars — the beach, restaurants, etc.

The reason the film now seems so modern is that it doesn’t simplify its characters or remove them from their social and economic context. Some of these women have the luxury of living what we have come to know as a ‘lifestyle,’ removed from the average Italian’s worries over basic necessities. Nene knows her husband is straying, but also knows that it’s not good to fight for him. Mariella is a spoiled, selfish troublemaker. She will neck with another woman’s boyfriend just for the fun of it, or make thoughtless, cruel remarks about a close friend. Momina remains superficial with her lovers because she has no intention of leaving her husband. Cesare comes running to Momina’s for a ‘private evening’ only to find that she’s toying with him — the girlfriends have shown up as well. 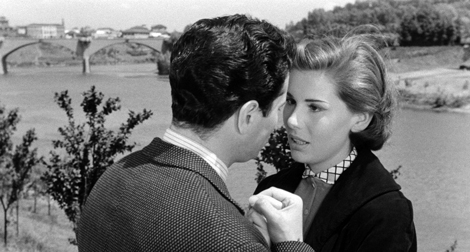 The other modern, very Antonioni aspect of Le Amiche is the Rosetta character, played by Madeleine Fischer. Rosetta attempts suicide over a romance, but she also complains that she feels she has no purpose in the world, no reason to live. As explained by commentators David Forgacs and Karen Pinkus, the original Cesare Pavese novella takes place in the immediate postwar years, and is more despairing of human nature. The working class is struggling in poverty while the well-off girlfriends continue with their idle pleasures as if the war had never happened. Pavese killed himself in 1950; the nearly twenty movies based on his works were all made after his death.

The nature of Rosetta’s attempted suicide was apparently the only concession made by Le amiche to the Catholic censors — one can die for love in an Italian movie, but dying because existence is futile was not permitted. But the story has two more relationships that defy the standard take on marriage. With divorce disallowed, Momina and her husband have arranged some kind of open marriage. Her attitude is that any man that can be separated from his wife, is fair game. 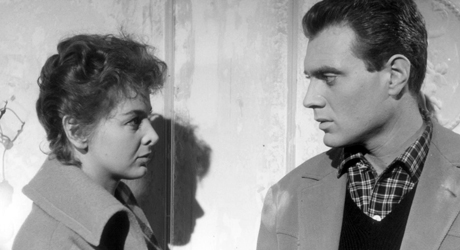 Clelia stages her fancy salon opening with the help of her supervisor from Rome, an unmarried career woman at least twenty years older. The two of them talk about the design couture business. Selling expensive dresses in Rome is different than selling in a ‘recovering’ city like Turin. The Roman women want the best but expect bargains. Well-off Turin women will gladly spend for the illusion of sophistication. Clelia and her supervisor also talk about the difficulty of being female and independent.  Most men don’t want their wives to work. Clelia loves Carlo but has no intention of quitting to let him support her, and a construction worker for a husband would also be a social liability.  Clelia’s friends might have a fling with a handsome man like Carlo, but that’s probably it.

I can’t think of an American film about relationships between women that’s as rich or as relevant as Le Amiche. It’s beautifully acted and directed, and as perfectly balanced and formed a drama as I can imagine — serious but never pretentious. I guess Antonioni mastered the form in his early dramas before he became more daring with his Monica Vitti art house pictures. The movies are still concerned with the same human issues. 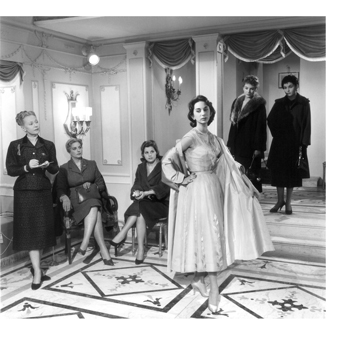 The Criterion Collection’s Blu-ray of Le amiche is a clean encoding of this really impressive picture. We’re told that it was in poor shape before the Italian restorers took charge. There are still some vertical streaks now and then but otherwise the final product is excellent — a fine contrast range, a stable image, no jumps or breaks. It looks a lot newer than 1955. It’s a handsome picture by any measure. The show looks even better than the stills I’ve posted.

Criterion’s extras this time around are particularly informative. David Forgacs and Karen Pinkus lay out the film’s historical and social context, pointing out things we won’t necessarily notice, but that Italians of 1955 definitely would. The affluent social set with their clothes and cars are the exception in Turn, a primarily working class city. This is why a dress salon is a new addition to town, and why Carlo assumes that Clelia won’t want to eat in the ‘common’ diner down the street. Forgacs and Pinkus also trace themes and visuals from Le Amiche forward into Antonioni’s better-known pictures.

A fashion-oriented interview featurette with Eugenia Paulicelli is just as entertaining. The designer clothes we see are more practical looking than those seen in Audrey Hepburn movies of 1955. The dresses are by the Fontana sisters, who came to Rome with nothing and in just a few years built a famous dressmaking business. Ms. Paulicelli explains that the Fontanas could have been the model for Clelia’s boss. The featurette’s analysis of the characters by costume is very interesting, too.

The insert essay is by Tony Pipolo. Kate Elmore is Criterion’s disc producer. I hope that Antonioni’s Il Grido is in the works for a future disc release.