Brigitte Bardot proved her mettle as a dramatic actress in H.G. Clouzot’s strikingly pro-feminist courtroom epic, that puts the modern age of ‘immoral’ permissiveness on trial. Is Bardot’s selfish, sensation-seeking young lover an oppressed victim?  Clouzot makes her the author of her own problems yet doesn’t let her patriarchal inquisitors off the hook. H.G. Clouzot mesmerized audiences with the political outrage of The Wages of Fear and the riveting horror-suspense of Diabolique, but his intellectual, less accessible spy puzzle Les Espions hadn’t fared well, and neither did his experimental art film The Mystery of Picasso. He led the pack of old-school film directors marginalized by critics Truffaut and Godard, the directors that the young Turks said perpetuated a cinema-stifling ‘tradition of quality.’

Clouzot struck back with one more remarkable success in 1960. The heavy duty drama stars France’s then-most famous woman Brigitte Bardot, who was associated mostly with sexy lightweight comedies. Clouzot’s project had a higher goal than fulfilling a star’s quest for industry awards and dramatic respectability. With the help of a battery of female writers including his own wife Vera, Clouzot tackled the issue of sex inequities in society through a young woman’s trial for murder. American audiences in 1960 may have compared La vérité (The Truth) to Robert Wise’s I Want to Live (1958), a self-avowedly anti-capital punishment film. They also surely remembered Otto Preminger’s Anatomy of a Murder, which demonstrated all too well that even a civilized trial won’t always arrive at a just, or fair conclusion — a legal decision may have no relation to the Truth, and who is to say that the Truth is even knowable? 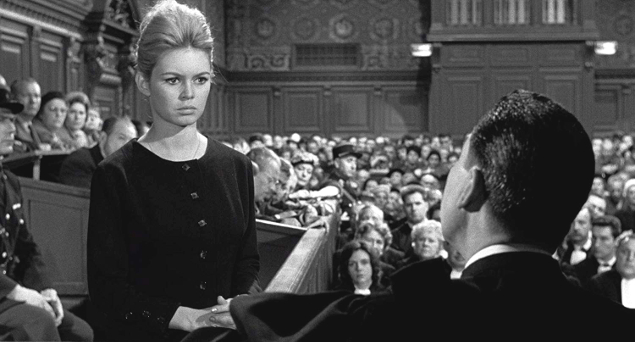 Clouzot puts on trial some of the controversial things that Brigitte Bardot was said to represent in a France undergoing change, especially the new sexual freedom seized by the younger generation. How could conservatives support Bardot’s numerous love affairs as an example for young women?  The film’s real-life relevance is shared by Clouzot’s best movies.

Young Dominique Marceau (Brigitte Bardot) is on trial for the murder of her lover, musical student Gilbert Tellier (Sami Frey). Her defense attorney Guérin (Charles Vanel of The Wages of Fear) must wage gentlemanly war against the prosecuting attorney as well as an attorney representing the interests of the victim, Éparvier (Paul Meurisse of Diabolique). It doesn’t look good for Dominique: she admits to shooting Gilbert, and her claim that her intention was to commit suicide is roundly rejected. Practically the entire court is prejudiced against Dominique from the start, and the prosecution’s exposure of the sordid details of her short life (presented in flashbacks) does her no favors. Unhappy living under the restrictions of her working-class family that compares her unfavorably to her smarter, musically-talented sister Annie (Marie-José Nat), Dominique rebels by embracing fun and sensation. Her parents break down and let her go to Paris with her sister, but they soon go their separate ways. Dominique hangs out with a scruffy bohemian crowd, and begins sleeping with men; she sees nothing wrong with teasing Annie’s boyfriend Gilbert, a promising student orchestra conductor. Annie encourages the serious Gilbert to become obsessed with her, all the while flaunting her other liaisons to drive him to distraction. When they finally move in together the suspicious Gilbert can’t stand that Dominique continues to work at a club where men see her as a target for conquest, especially her boss. When Gilbert decides to reject the arrangement and marry Annie, the spurned Dominique experiences emotional upheavals she hadn’t expected. A period of general debasement leads to tragedy.

Thirty years previously, La vérité would have been called a ‘way of all flesh’ story, like Of Human Bondage. The sordid tale blames its romantic tragedy on class difference and sexual obsession, yet casually identifies the woman as the source of trouble. Our Production Code blew away any hope of approaching difficult love relationships reasonably. By the 1950s, women characters that dared to be sexually agressive were simply not acceptable. In serious stories they were thoroughly discredited, or killed off. In lighter fare their supposed promiscuity was more often than not discovered to be a simple romantic misunderstanding — ‘I just thought you were unfaithful.’ ‘What, you’re not a high-class call girl, and you really love me?”  Even into the 1960s, the solution for happiness frequently was for the ‘problem’ woman to give up her independent ambitions and settle down as housewife to a dominant male.

In La vérité Clouzot hits the subject head-on, without excuses. Dominique is indeed a tease, a reckless free-spirit looking no further ahead than her next fun experience. She only feels self-worth when she excites men; she takes nothing seriously. Her bar-hopping art friends dream of hipster lifestyles while crammed into tiny rooms; Dominique is both more liberated and less tethered to practicality than any of them. She knows that she’s basically a failure. She expends her energy in the avoidance of a reality that judges and condemns her. Of course, tragedy strikes just when Dominique finally becomes serious about what she wants from love.

Clouzot is said to have meticulously planned every aspect of his films. He was a demanding taskmaster, never settling for anything less than what he wanted. The Parisian music school background is nicely sketched — Annie is talented and graceful, and Gilbert seems primed for a solid career as a conductor. The rehearsal scenes are particularly convincing (and musically beautiful). For a time Dominique makes a real effort to fit in with Gilbert’s serious career. In a Somerset Maugham tragedy Gilbert would foolishly throw away his artistic future over Dominique — and she would be held responsible. Men are granted an easy-out excuse for failure, if they can blame a woman.

The director’s disputes with Bardot on the set now pale in comparison to the performance he elicits from her. Yes, when Dominique is having fun being frivolous and flighty, and teasing the hapless Gilbert, she resembles the BB of her earlier comedies. But her performance in the defendant’s dock, facing the universal disapproval of the gallery and the scornful reproaches of the judges, is something entirely new for the star. When Dominique finally reacts with outbursts, she loses control — yet expresses for the first time thoughts she had never before taken seriously. Her key outbursts are a counter-accusation against the men who understand nothing, and the scandal-seeking gawkers ‘that have never lived.’ 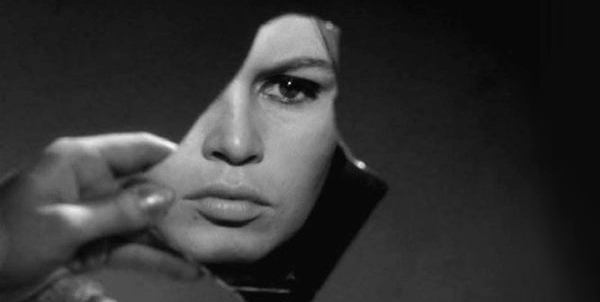 The director’s visual control follows the formal values challenged by the New Wave’s call for cinema to capture life in a spontaneous manner. More like traditional cinema literature, the visuals build on patterns. Dominique is given her first big close-up in a broken mirror. The shard of glass makes her into a puzzle piece that hasn’t found its place in life, and it also provides the tool for her ultimate escape.

In the courtroom Dominique is just raw material for a process that presumes her utter guilt. Joan of Arc faced a tribunal designed to break her into pieces, and harsh, hypocritical men facing Dominique from the bench see nothing wrong with lacing their every utterance with moral contempt. They condemn her as selfish, unprincipled, lazy, disrespectful and indecent; her thoughtless irresponsibility is chalked up to malice and original sin. The fact that Dominique has ruined a Good Man — a musical artist in a conventionally respected field — makes her an assassin, and her admitted instances of willful promiscuity are equated with pure evil. Therefore nobody will accept her insistence that she and Gilbert really loved each other, and that she shot him only in a fit of emotional chaos.

Just like the superstar Bardot, who in public cannot leave her celebrity behind, Dominique sees no possibility of life in a world that will forever judge her as an abomination. La vérité doesn’t go in for outrage and shock, as an unhappy fate seems a foregone conclusion. The show is too sophisticated too simply blame the judges and the prosecutor for an ‘unfair’ trial. Dominique’s problem began as a child when she was judged and convicted as being unworthy. The intolerant and hypocritical paternal system is to blame. 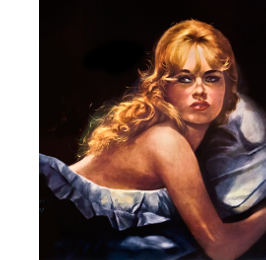 The Criterion Collection’s Blu-ray of La vérité is a new 4K digital restoration in 1:66 widescreen. The show was unavailable for the longest time, even when some of Clouzot’s more obscure early writing credits could be seen. Ms. Bardot looks sensational as ever, even though much of her screen time is spent in non-glamorous situations. She’s a delightful spectacle when dancing at the club. There’s no outright nudity, but a scene in which Dominique shakes her derriere under a thin sheet, quivering first for her own pleasure and to entice the astonished Gilbert, takes screen eroticism on a sideways detour.

Disc producer Elizabeth Pauker relies on a short but potent list of extras. A recent hourlong docu on H.G. Clouzot covers his career and curious personal life in fine, well-illustrated detail; it dovetails neatly into the remarkable docu Henri-Georges Clouzot’s Inferno which covers the disaster of his final film project. A direct 1960 interview gives us a chance to further size up Clouzot — he starts by telling the interviewer that he’ll only talk about his movies, not his personal life. A docu excerpt about Bardot addresses her difficult career and features impressive newsreel coverage from the time of La vérité. Ginette Vincendeau’s insert essay makes the case for the film as a feminist milestone, advancing further its status as one of Clouzot’s best achievements.