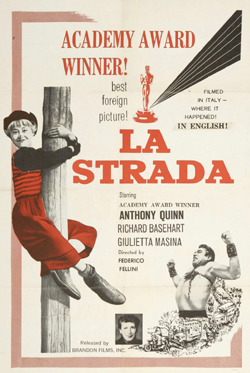 The film that put Federico Fellini on the map internationally, with his wife Giuliana Masina’s‚ indelible‚ performance as the waif mistreated by brutish strongman Anthony Quinn. Richard Basehart provides further US name value although he doesn’t dub himself in the English version. Winner of the first Academy Award for foreign language film in 1956.