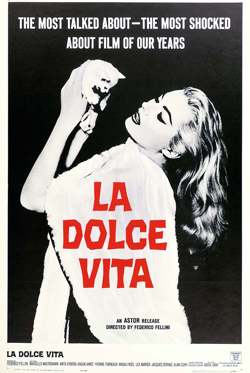 Federico Fellini casts a serio-comic eye on the modern day decay of man, morals and civilization circa 1960. Stunningly photographed by Fellini’s long time collaborator, Otello Martelli, the film avoids any number of pretentious pratfalls due to the self-mocking demeanor of its world-weary leading man, Marcello Mastroianni. Nominated for four Oscars and winner of the Palme d’Or at the 1960 Cannes Film Festival, the movie is that rarity, an esoteric product of the arthouse that was also a formidable box office hit.