It’s the time-honored tale of the cuckolded lover, his heartless woman and ‘the other guy,’ told in terms that Émile Zola would endorse. Jean Renoir’s first full-length talkie is a little masterpiece of social observation and indifference to sentimental niceties. Michel Simon is terrific as the clerk who has a tough time with illicit love. 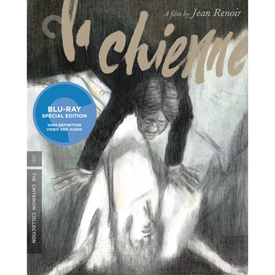 We American film students learned about Jean Renoir’s La chienne only in the context of its remake. It’s an earlier version of the book by Georges de la Fouchardière, that was also adapted for Fritz Lang’s 1945 noir Scarlet Street. Renoir’s film has never been readily available here in the States, an oversight now corrected with Criterion’s new Blu-ray. The good news is that the French restoration of this tale of vice and virtue is beyond good — the movie looks absolutely new. The even better news is that the movie is a revelation, the equal of Renoir’s Boudu Saved from Drowning. This is the kind of movie that might suffer in a bad presentation — the ability to soak up its atmosphere and detail makes all the difference. 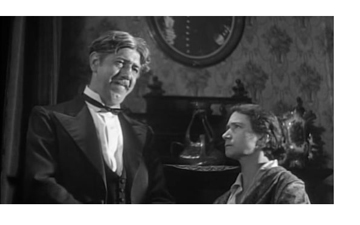 Yes, the title does translate as The Bitch, a straight-up vulgarism. The story parallels most of the same events of the Lang version. A puppet theater prologue tells us that story has no moral, no lesson to be learned. Company cashier clerk Maurice Legrand (Michel Simon) is a meek, henpecked husband and a Sunday painter. Maurice’s wife Adèle (Magdaleine Bérubet) harangues him about her beloved first husband, to whom he’ll never measure up; work colleagues make fun of the meek Maurice behind his back. Late at night Maurice meets Lucienne Pelletier (Janie Marèse), who he does not realize is the sometime-prostitute of Dédé (Georges Flamant), a vain, brutish punk who takes the money she squeezes from the men she meets and beds. He beats her for good measure, but she seems to enjoy it. Maurice has soon installed Lucienne in a love nest. He tells Adèle that he’s thrown his paintings away, but instead puts them on the walls of Lucienne’s apartment. She and Dédé have the mistaken impression that Maurice is rich, but he keeps her by stealing money from his wife, and eventually, the office safe. Then something unusual happens. Dédé tries to sell Maurice’s paintings as the work of Lucienne, and has success. She is soon signing his paintings as a supposedly well-known American artist named Clara Wood. Critic Langelard (Alexandre Rignault of Eyes without a Face) promotes ‘Clara’s’ art because she offers him sexual favors. Dédé makes much better money pimping Lucienne in the art world, than he did on the street.

Far too naturalistic, ‘earthy’ and sordid for anything Hollywood might have produced in 1931, Renoir’s La chienne turns a ‘way of all flesh’ tale into a sharp criticism of society. The milquetoast Maurice Legrand is too naïve to realize that he’s being had by Lucienne, a femme fatale well versed in hooking wealthy, vulnerable clients. Lucienne herself is a romantic fool, hopelessly in love, or lust, with a man who treats her like dirt. The more abuse Dédé dishes out, she just comes back for more. When Maurice declares his desire to take Lucienne away, she laughs in his face without a shred of sympathy or basic respect. 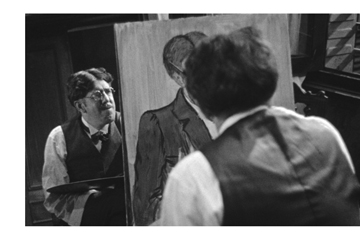 Stories like this do not have happy endings, and La chienne’s main task is to imply that the art world is as big a racket as prostitution. ‘Clara Wood’s’ paintings become big sellers because Dédé pimps Lucienne to a critic willing to praise them for sex. The art dealer and the critic collude to tout ‘Clara’s’ paintings to new clients, one of whom we see getting quality time with the artist as well. As director Renoir was of course the son of the famous painter Auguste Renoir, it’s easy to see a personal connection in the critical view of Art as a business.

Renoir used live location audio, adding greatly to the film’s realism. As there was not as yet any audio mixing for French films, the tracks are beautifully miked to pick up ambient sounds. We even hear the clacking of Lucienne’s shoes on the cobblestoned streets. Theodor Sparkuhl’s night exteriors are every bit as sophisticated as later low-key, deep focus work in ’30s poetic realism and ’40s film noir. The rain we see in some scenes may be real as well.

The film isn’t about crime and retribution, but the grand ironies of ‘the oldest story,’ a foolish love that leads to murder. The tale turns comic when Maurice has to deal with a man from Adèle’s past, who turns up unexpectedly and then figures in the even more ironic ending.

The three main characters are just terrific. Michel Simon is a very different character than his bohemian Boudu from the following year. The actor is also far thinner than we’re used to seeing him, in films made just a few years later. Janie Marèse is as dangerous a female as ever hooked a man. Lucienne’s unreasoning, limitless love for Dédé makes her pure poison for a defenseless fellow like Maurice. Georges Flamant also demonstrates great skill as a thorough, unrepentant louse. 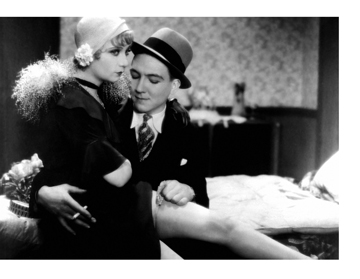 Comparing La chienne with Lang’s Scarlet Street sets the difference between the humanist and determinist filmmakers in strong relief. Both Renoir and Lang see the events as an unstoppable consequence of human nature, but Renoir’s view is much warmer. Maurice lives in a full spectrum of human interaction, even if most people take him for a fool. But he’s essentially a warm and accepting person, and his one moment of violent rage is fully understandable. When all is said and done, with his life ruined, Maurice can still laugh at the absurdity of it all. Life goes on, somehow.

Lang’s version is a chilly noir thesis that makes its innocent hero (Edward G. Robinson) a more innocent victim, not only of Joan Bennett’s cheap tart, but of his employers and society itself. His rich boss doesn’t even have to hide the fancy woman he keeps on the side, whereas Robinson’s wife keeps him around mainly to wash dishes. As one expects from Lang, the plot twists are sharper, wickedly ironic and cruelly merciless. Lang doesn’t believe in ‘live and let live’.’ Haunted by what he’s done, his poor hero goes insane. Life does not go on.

Renoir’s film has a music theme under the titles but I believe the rest of its music is organic, always with a source in the scenes. The beautifully filmed murder takes place with a ballad singer entertaining in the street. Unable to protest when his wife compares him unfavorably to her first husband, the long-lost soldier, Maurice instead sings a mocking children’s song about a soldier who went to war and didn’t come back. [When we screened La chienne, my wife jumped up immediately at the sound of the song. It has a nearly identical Spanish counterpart, “Mambrú Se Fue A La Guerra.” Mambrú went to war, and if he comes back it’ll only be at Easter and Christmas. Most likely, it’ll be never. To my mind it’s a great children’s song because it reflects the reality of war glory. There’s the Sunday Savant culture lesson for you.] 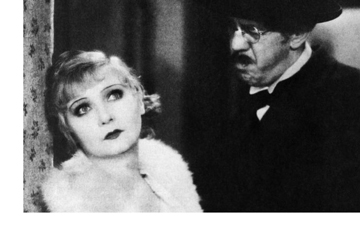 The Criterion Collection’s Blu-ray of La chienne is simply terrific — it looks much better than many expensively restored American movies from this year. The producer must have kept the picture and audio masters in perfect conditions. The rich images display a modulated granularity that heavy digital processing would surely have removed. Being from 1931 the sound does carry a light surface noise. The extras explain that a few lines recorded on location are weak, but I didn’t notice as I of course was reading the English subtitles. It’s a welcome disc indeed. Christopher Faulkner hosts the 25-minute overview featurette. He covers the love triangle that developed among the actors during filming, and the sad fate of the film’s star Janie Marèse. Faulkner places the film in Jean Renoir’s career, explaining that in the 1920s the director was often adjudged a dilettante. He had to prove himself before the producers would let him do a sound feature.

Here in its entirety is Renoir’s short (50 minute) film On purge bébé from the same year, a talkie Renoir was obliged to film to prove he could handle sound. The title translates as Baby’s Laxative — it’s a comedy from a play by George Feydeau, about a manufacturer of chamber pots whose son is constipated! Michel Simon is a visitor to the house, where Baby’s parents carry on a marriage squabble suitable for a music hall farce. Playing a small supporting part is a young Fernandel. On purge bébé must have been kept in the same magic film can as the main feature, for it is fully restored and just as perfect.

Jean Renoir offers one of those introductions filmed for French TV in the early ’60. Much rarer is a 90-minute 1967 TV show hosted by Jacques Rivette, in which both Jean Renoir and Michel Simon reminisce about their careers and La chienne. The precise, informative insert essay is by Ginette Vincendeau; and the attractive cover art is by ‘Blutch.’ Criterion’s disc producer is Elizabeth Pauker.