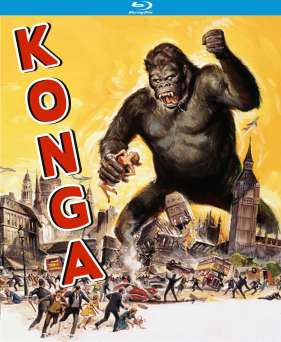 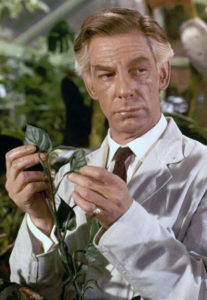 Like any actor worth their salt, Michael Gough contained multitudes. And so did his fans – from the West End to 42nd Street they gathered as one to sing his praises. Born in Kuala Lumpur and educated in England, Gough bolted Wye College for the Old Vic, eventually graduating to roles in films like Richard III and The Horse’s Mouth. Haunting the studio by day, he tread the boards at night showing a special talent for light comedy and, in the words of critic Caryl Brahms, an “extraordinary capacity for pent-up emotion.”

In 1959 Gough’s day job took a turn for the weird – producer Herman Cohen offered him the lead in Horrors of the Black Museum, the grisly tale of a crime enthusiast with a fetish for eccentric torture devices. And absolutely no capacity for pent-up emotion. 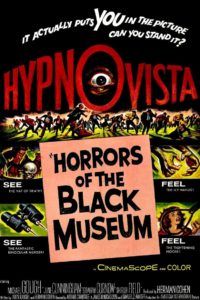 Based on true life tabloid atrocities, the sordid material inspired the normally measured actor to go for the gusto – as the mad anthropologist Edmond Bancroft, Gough happily sacrificed his vocal cords, barking, sneering and spitting his way toward the end titles. But Gough and his Black Museum would make a lasting impression, not only at the box office but in movie history – in the early 90’s Cohen’s CinemaScope shocker was inducted into the Museum of Modern Art by Martin Scorsese.

Gough found steady work playing variations on the loopy Bancroft in films like 1967’s Berserk! and 1970’s Trog but it was in the three early sixties thrillers produced by Cohen that the actor cemented his peculiar niche – Black Museum, Konga and Black Zoo. Whether as a bloodthirsty historian, a power-mad scientist or the Grand Poobah of an animal-worshipping cult, Gough conducted a master class in free-style hysteria – performance art so extreme it was almost immune to ridicule. In other words, you never know what is too much until you’ve seen it. 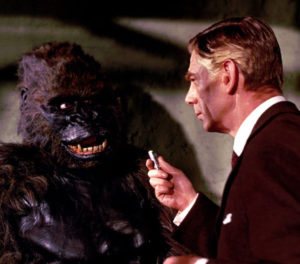 A crowd-pleaser like Black Museum demanded an encore so Cohen enlisted his longtime collaborator Aben Kandel to concoct the story of a cuddly chimp who grows into a formidable threat ala Mighty Joe Young (the writer knew his way around misunderstood monsters, he did the script for Cohen’s I Was a Teenage Werewolf). Gough returned to star as Dr. Charles Decker, a botanist with an affinity for plant life and not much else except the tiny simian he rescued from the wilds of Africa.

Aside from the little monkey, a passel of exotic flowers is the only other souvenir of the scientist’s sojourn with an amiable witch doctor willing to share his secrets. Decker is convinced the exotic serum produced by the shaman’s plants will enable him to “change the shape of human beings” and he’s eager to test it out on his submissive little pet. The excitable doctor gets more than he bargained for – one dose too many and his furry companion – appropriately named Konga – experiences growth spurts worthy of his namesake. 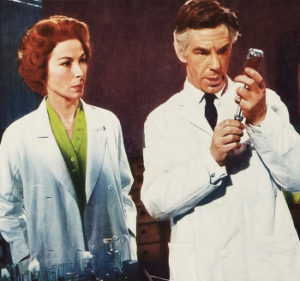 The adorable monkey is not the only guinea pig in Decker’s orbit – he treats his love-sick assistant Margaret like a doormat and she’s only too happy to grovel. It’s a relationship defined by Stockholm Syndrome rules; the more Decker growls, the more Margaret mews. It’s not long before the doctor grows bored with the matronly masochist and sets his sights on Sandra, a shapely undergrad ripe for some extracurricular monkey business.

Like most mad scientists Decker is set on world domination and he employs Konga as his secret weapon. Whenever his plans are threatened – whether it’s Sandra’s jealous boyfriend or a nosy competitor, the now burly gorilla is there to silence them. 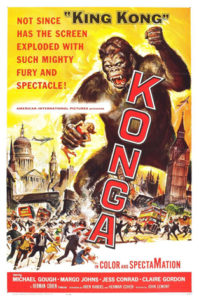 Reynold Brown’s eye-popping poster art promised “mighty fury and spectacle” but the sky-scraping ape envisioned by the artist wouldn’t make his appearance until the 77 minute mark of the 90 minute film. Patient monster-lovers were finally rewarded when the newly super-sized gorilla grabs Decker for a quick jaunt through Piccadilly – a teeth gnashing, plane crashing finale memorable for all the wrong reasons. Dangling from Konga’s paw 300 feet in the air, the arrogant Decker remains resolutely in character, his hair unmussed and sounding more offended than frightened – “Put me down, you fool!” he yelps. But Konga holds tight until the military puts them both, man and monkey, out of their misery.

Despite Kandel’s risible dialog and John Lemont’s ham-handed direction, Konga still manages a professional sheen thanks to composer Gerard Schurmann‘s stentorian score and the presence of cinematographer Desmond Dickinson (The Rocking-Horse Winner, Olivier’s Hamlet). Dickinson was clearly hamstrung by the budget and an art director who painted every wall in the Decker household an irradiated green but the superb photographer still manages to squeeze a little cocktail-hour atmosphere out of Decker’s greenhouse romp with Sandra. 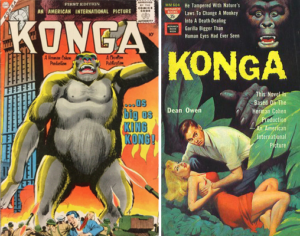 Cohen’s film was the little rip-off that could, even barnstorming newsstands with a long-running adventure series from Charlton Comics (with art by Steve Ditko) and a paperback tie-in written by “dirty” Dean Owen, a hardworking hack who could always snare the raincoat crowd with the kind of bedroom action better suited to a short story in Gent. The tacky page turner  was published by the reliably smutty Monarch Books (who, along with their usual fare like The Flesh Peddlers and My Neighbor’s Wife, offered other Owenesque takes on kid-friendly films like Brides of Dracula and Reptilicus.) 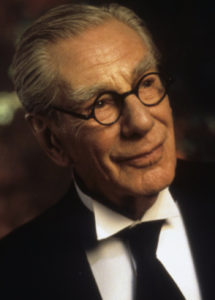 Gough’s career only thrived after Konga – showing off his range in Ken Russell’s Women in Love and Martin Scorsese’s The Age of Innocence while adding a Tony to his trophy room for the Broadway production of Alan Ayckbourn’s Bedroom Farce. In 1989 he created a new generation of fans with his unexpectedly charming turn as the butler Alfred in Batman.

The huddled masses were fixated on the Caped Crusader and his doppelgänger The Joker but long time Gough aficionados understood Alfred cultivated his own secret identity. Behind that warm grandfatherly smile was a sneering despot, plotting and scheming all these years to – dare I say it – rule the world. It turns out that when all was said and done, he did.

Kino Lorber’s new Blu ray presentation of Konga is the best home video incarnation of the big ape yet, the detail is excellent and the colors are blooming – especially in Decker’s greenhouse getaway where the “sinister foliage, both insectivorous and carnivorous” are especially lustrous (including the balloon-like whatchamacallits that look like sex toys out of an H.P. Lovecraft story).

Extras include an image gallery, radio spot and the original theatrical trailer.

For Kong-pletists, here’s the original UK trailer (its vibrant color only hints at Kino’s accomplishments):