This is the ultimate in screen sadism circa 1947, and it’s all in the debut film performance of Richard Widmark as a too-nasty-for-words hood who likes to shoot people in the stomach. Actually, Victor Mature is not bad in a grim story of a stool pigeon that tries to square himself with the law, and finds himself a target for mob murder. 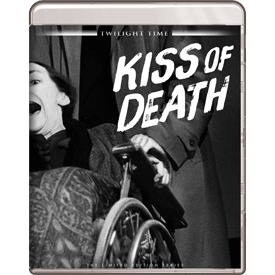 The older they get, the better they look. Henry Hathaway’s Kiss of Death is an effective but slightly dated film noir better known than most for two salient factors: the debut of actor Richard Widmark as an irresistibly evil killer, and some ruthless brutality. Notably notorious on its release in 1947, the film’s violence might seem less disturbing if Widmark’s sadistic, chortling Tommy Udo wasn’t the perpetrator; Udo’s manic behavior and horrible laugh inspired chills in theaters across America. 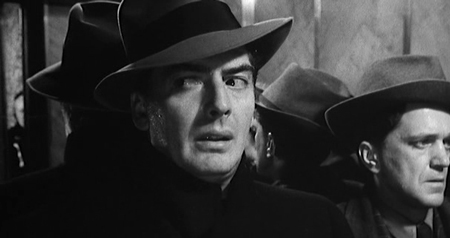 The story is basically about the inherent nobility of a police informer. Thief Nick Bianco (Victor Mature) is wounded and caught while fleeing a jewelry store holdup. He’s sent up the river for a stiff sentence and turns down an offer to become an informer for Assistant District Attorney Louie DeAngelo (Brian Donlevy). But after three years behind bars tragedy strikes Nick’s family and he changes his mind. Nick starts up again with his two daughters and new wife Nettie (Coleen Gray) but faces even greater danger: DeAngelo wants him to testify against Tommy Udo (Richard Widmark), a nasty killer with a penchant for torturing squealers.

In 1947 20th Fox had established its own house brand in films noir. Their 1945 hit House on 92nd Street initiated the practice of deserting the studio to film in real locations. Some use was made of non-actors, an interesting development that paralleled Neorealism in Italy. Except for its violent ending, Kiss of Death is filmed entirely on the streets of New York City and environs, with Norbert Brodine’s shadowy photography kicking up an expressionist mood equal to what was being achieved on soundstages back in California. It’s an interesting combo: authentic locations, but lit as if they were Hollywood sets.

As a crime story Kiss of Death embraces a sentimentality that goes against the noir grain. Its honorable Louie D.A. DeAngelo keeps his word about protecting informants and their families, a situation we no longer believe happened very often. DeAngelo is a tough negotiator but as soon as he sees Bianco’s sweet little girls we know he’s basically become one of the family. When Nick is in trouble, Louie takes a personal interest. It’s much easier to believe that one of DeAngelo’s detectives would purposely spill the beans about Nick just to see him suffer. As a worst-case scenario we have 1974’s excellent The Friends of Eddie Coyle. In that film Robert Mitchum’s unhappy squealer is double- and triple- crossed by an ambitious investigator, who allows him to be set up for execution by a more ‘useful’ stoolie. 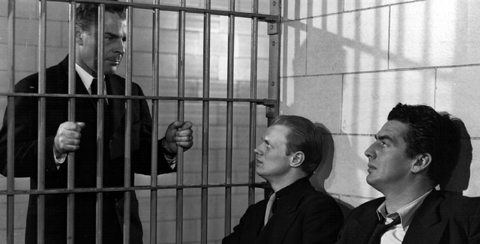 By contrast, Kiss of Death would win the approval of any police protection league. With plenty of Catholic imagery in tow, we see Nick Bianco take his punishment and then continue to suffer a harrowing ordeal. He gets horrible news about his first wife and later sees his second family threatened by a slippery criminal. Tommy Udo boasts of his revenge in sarcastic tones: “Yeah, you and me and your kids and your wife, we’re all going to play together.”

Actor Richard Widmark was actually a highly educated college instructor- turned Broadway actor known for breezy roles on the stage. Darryl Zanuck outfitted Widmark with a creepy wig that makes him look a bit like Henry Hull in The WereWolf of London. Tommy Udo’s eyes gleam and his lips moisten when he prattles on about gouging a guard’s eyes out, and he goes manic when rooting for more gore at a boxing match. Udo’s distinctive laugh cemented Widmark’s place in screen history. The actor said that he sometimes laughed the same way in harmless fun, but with a little exaggeration it came out sounding totally depraved. Film noir of the late ’40s had its fair share of sick-o sadists, as with Hume Cronyn’s memorable prison torturer in Brute Force). But Tommy Udo takes the prize. Discovering that a frail old lady has attempted to trick him, Udo ties her to her wheelchair and rolls her down a steep set of stairs. The terrified, screaming victim is actually noted stage actress Mildred Dunnock in her third movie. She’s supposed to be a fragile seventy years old, but Dunnock was forty-seven at the time.

‘Pushing the old lady down the stairs’ became the scene for shocked columnists and commentators to reference when decrying what they claimed was a growing blight of brutality and sadism on movie screens. Post-war filmmakers were getting away with a lot more murder than usual, for reasons that are unclear: it’s possible that the censors were less sensitive to violence after the experience of the war. The most noted denouncement of these pictures came from director Frank Capra. His autobiography offers the pale argument that a new kind of sick movie is a cancer on society, and that the only cure was the uplift of his kind of sentimental, positive-oriented storytelling. It’s interesting that most of Capra’s ‘uplifting’ entertainments invent Evil alternatives to his happy themes, if not an evil political bogeyman. In his politically populist pictures, he goes in for his own kind of twisted, forced martyrdom, as with the threat of ignominious suicide in Meet John Doe. Although Capra rails against the negativity of the noir outlook, he dabbled in the form more than once. His masterpiece It’s a Wonderful Life becomes profound only when George Bailey is confronted with an alternate vision of his own existence, a noir nightmare. 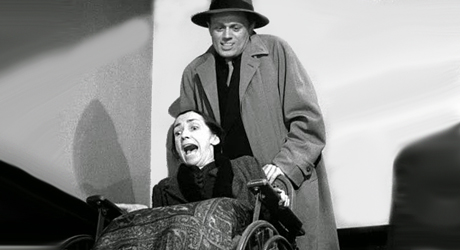 DeAngelo’s plan to convict Tommy Udo doesn’t work out, which means that the killer will surely strike back at Nick Bianco and his family. Embracing martyrdom, Nick ignores DeAngelo’s orders and puts himself directly in harm’s way to remove the threat to his wife and kids. (spoiler) He offers himself as a target to the deranged Udo, so the cops can arrest him with a gun in his hand. The ending scene is handled like a crucifixion, with Nick atoning for his own crimes, those of his father, and even the mortal sin committed by his first wife.

(Bigger spoiler:) The film’s grip is broken with a jaw-droppingly false ending. Darryl Zanuck green-lit and finished noirs like this one and Thieves’ Highway, and then spoiled their downbeat endings with unconvincing, last minute rewrites. (Spoiler, spoiler, honest) Nick Bianco is shot at least four times point blank with a .45 automatic. The picture shows him being rolled into an ambulance, eyes shut, but his wife’s farewell narration overturns the obvious finish, telling us that her husband comes out of it okay: “… and I got what I wanted. I got Nick.” Darryl Zanuck knew his audience. He and the Fox board in New York had too much riding on this “A” picture to send patrons out in a state of depression. In film noir, the freedom to luxuriate in morbidity could be better tolerated in low-budget efforts from small independent studios.

Victor Mature was often derided as being less of an actor, and more like a walking side of beef. In this show he’s better than good, and Henry Hathaway’s careful direction does the rest. Nick Bianco is a crook with integrity, a memorably sympathetic character. Brian Donlevy is dependably monotone as the D.A. but also comes out in the plus column. Fox starlet Coleen Gray never made top star status yet appeared in scores of memorable parts, usually as women that men can’t forget: Red River, The Killing. Her one starring vehicle is a promising-sounding horror tale The Leech Woman. Also making a good impact are Taylor Holmes as a corrupt lawyer and Millard Mitchell as a detective. Karl Malden is visible for only a few moments as a detective sergeant. His role may have been cut down during editorial. A blonde named Temple Texas shows off a naughty smile in a short bit part, at least until Tommy Udo sends her packing. 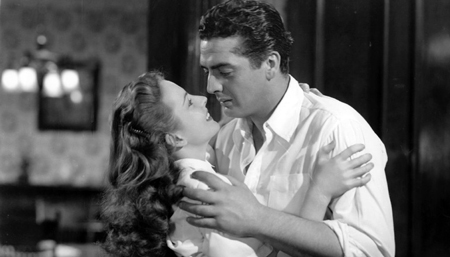 The Twilight Time Blu-ray of Kiss of Death is a fine transfer of a title that looked great in DVD as well. The improved image allows a more detailed appreciation of the real locations and careful lighting. In a couple of years, the ‘semi-docu’ look would further complicate things, mixing real locations with studio sets, and jettisoning fancy lighting and other expressionist touches, all in the name of ‘realism.’

Twilight Time gives this core Fox Noir title a class presentation. Recorded at least twelve years ago, Alain Silver and Jim Ursini’s commentary is as good as an academic analysis can get. They talk some film theory while tackling a massive volume of production detail from the Fox files, and also from their own interviews done for the A.F.I. decades ago when key cameramen and directors from the classic era were still with us. They also are quick to point out when Fox noirs cleaned up ‘real’ stories almost beyond recognition, as in the popular Call Northside 777. Both are impressed by a scene in which Udo and Bianco are obviously visiting a house of prostitution. It’s altogether possible that the censors simply didn’t realize what they were looking at.

For more casual viewers and fans of the Twilight Time style, Nick Redman and Julie Kirgo collaborate on a lighter yet still insightful new commentary, with different opinions about the film’s themes and whether or not its pro-informing message still holds up. The contrast is a good thing, as no two experts agree on an exact definition of film noir.

The movie’s hard-sell trailer shows most of the violent action in the film but doesn’t bill Richard Widmark along with the stars. From his next feature forward, Widmark’s name would be above the title.