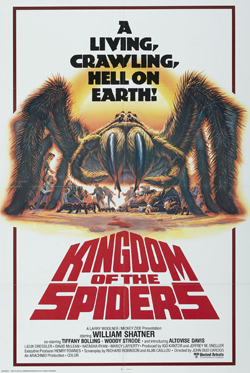 Kingdom of the Spiders

The spiders in director John Cardos’s 1977 eco-horror film aren’t giant-sized but there sure are a lot of them. A small town in Arizona is suddenly overrun by marauding tarantulas and the local vet, played by William Shatner, theorizes it’s because pesticides have destroyed the creepy crawlers’ natural food supply. The film has gained genuine cult status due mainly to its innumerable cable broadcasts along with the inherent absurdity of Shatner doing battle with an rampaging army of arachnids.