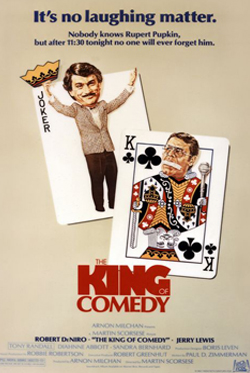 The King of Comedy

Ok, it’s not really such a comedy, unless you consider the comedy of embarrassment, humiliation and pain. Scorsese and DeNiro followed Raging Bull with this unexpected gem, a bracingly offbeat portrait of a wannabe comic who’ll do just about anything to impress his idol a jaded talk show host played (brilliantly) by Jerry Lewis. Audiences didn’t get it in 1982 but it’s come to be recognized as one of the director’s finest, sort of a skewed reimagining of Taxi Driver.