Bogie and Bacall are back, but with Edward G. Robinson’s oily gangster breathing down their necks — “Nyah!” Excellent direction (John Huston) and great performances (Claire Trevor) have made this one an eternal classic. We want subtitles for whatever Eddie whispered in Betty’s ear… A most-requested, or demanded, HD release from Warners. 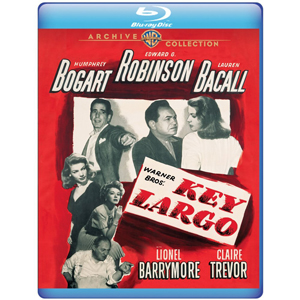 I’d guess that Key Largo became a classic the moment it hit the screen, as John Huston and Co. packaged everything an audience would like — big actors in big roles, with a couple of ‘great moments’ for each. It was something of a safe harbor for a certain set of Hollywood creatives that had the activist itch but weren’t sure yet which way the wind was blowing. John Huston emerged from the war making idealistic documentaries and doing smart writing assignments both for Warners and Mark Hellinger. He and Richard Brooks had worked on Hellinger’s The Killers, and they ended up sharing credit on this cockeyed ‘adaptation’ of Maxwell Anderson’s play. Written in blank verse, Anderson’s play from 1939 has a troubled veteran of the Spanish Civil War atoning for cowardice by standing up to Mexican bandits (?) in a confined space. Producer Jerry Wald purchased the play, which had starred Paul Muni, but by 1947 anti-Fascist dramas were all but extinct. The new rules for the Cold War were congealing, with the order of the day being to say nice things about Germany, nothing about Franco and to look upon anything politically left wing as highly suspicious. 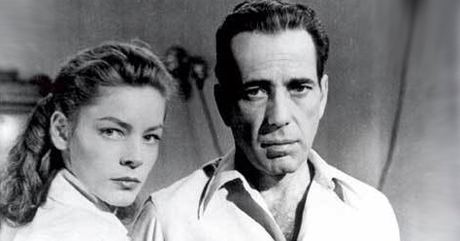 In the fall of ’47 the married Bogart and Bacall (and John Huston) had gone with a committee to Washington to protest the First Amendment Freedoms, only to come back and recant to insure the continuance of their livelihoods. Or depending on one’s outlook, they were duped by the Hollywood communists, plain and simple. Bacall’s one film flop was an espionage picture about the Spanish Civil War, the rather good Confidential Agent. But that was 1945, a million years ago. Have you heard of a John Garfield picture called The Fallen Sparrow lately? It was pretty big during the war, but anti-Fascist themes disappeared for a couple of decades.

However it came about, Huston and Richard Brooks converted Key Largo into something familiar, but different. Some locals are held prisoner by a group of gangsters, leading to a number of philosophical conflicts, just as in the classic Sherwood Anderson play The Petrified Forest. For an ending the writers came up with something almost identical to the Ernest Hemingway story that’s been revisited in To Have and Have Not, The Breaking Point and Islands in the Stream — a hero fighting it out with bad guys aboard a tiny cabin cruiser. Key Largo unspools like a stage play, expertly directed. Its star turns connected with the audience in a big way.

Former Major Frank McCloud (Humphrey Bogart) stops off at Florida’s Key Largo to pay his respects to the family of an army buddy, George Temple, who was killed serving under him in the Italian campaign. Frank’s arrival means a lot to old, wheelchair-bound James Temple (Lionel Barrymore), and to George’s widow Nora (Lauren Bacall). Frank is able to tell them both that George didn’t suffer at the end. But James’s winter hotel has been taken over by some strange tourists, who turn out to be a pack of gangsters led by the notorious Johnny Rocco (Edward G. Robinson), a prohibition hoodlum deported years ago, but now back to do a deal with counterfeit money. Just as a hurricane threatens, Rocco menaces Nora and comes close to killing Frank, who can’t decide what his best course of action is — what does he care if one more Johnny Rocco gets away? Among Johnny’s entourage is Gaye Dawn (Claire Trevor), an alcoholic who was once Johnny’s main squeeze. The local sheriff is snooping around, looking for some escaped Seminole Indians, while Rocco’s connection Ziggy (Marc Lawrence) is held up by the hurricane. As soon as Rocco commits his first murder, he’s stuck with a problem — can he afford to let these people stay alive? 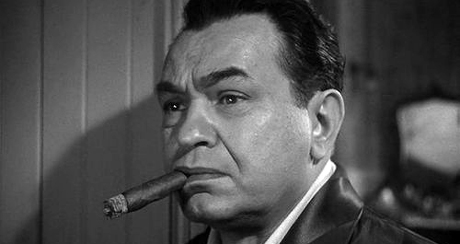 I have to list Key Largo with Hawks’ Red River — both are klunky, obvious stories that nevertheless work beautifully. Largo is a smoother dramatic piece, with the tension rising with the storm, literally. Edward G. Robinson had been lampooning his old gangster role now and then for fifteen years, so it’s marvelous to see him doing it straight again. His tough guy Johnny Rocco is just as legitimate as his Rico Bandello back in Little Caesar. Johnny Rocco is introduced like Jabba the Hutt, a slug in a bath (with even his navel showing!). His menace is more carefully outlined, although Huston and Brooks do play weak games with the bravura-cowardice concept. Rocco acts tough when his opponent has an empty pistol, and he loves to torment people. Did Huston come up with the brilliant idea of having him whisper-sneer things in Nora’s ear, several times? This allows us to imagine our own obscene proposals. For Bacall’s part, she’s better than ever in a role that doesn’t ask her to play a saucy seductress, a spin she and Bogart had taken to the limit in their first film and The Big Sleep. Nora’s concern for Frank is standard stuff, but it’s strongly felt, and not a put-on.

‘Mister cantankerous’ Lionel Barrymore doesn’t chew the scenery as he had under Frank Capra; after so many years of sentimental MGM roles it’s good to see Barrymore face a dramatic situation with real teeth again, a conflict that can’t be solved by his theatrical grandstanding. Barrymore even holds off on using his ‘pixie’ smile (the one that looks like “E.T.”) until the very end. The scene where his innkeeper Temple listens to Frank’s explanation of his son’s death, is a fine piece of reacting. With his imposing, loud personality, John Huston had what it took as a director to steer big Hollywood personalities toward the performances he wanted.

The supporting characterizations are on the money, especially Thomas Gomez’s second-in-command gangster, who actually shows some judgment and finesse when intimidating the rubes. He’s a good contrast for Robinson’s swagger. The star supporting player is of course the great Claire Trevor, who was already a fixture in some marvelously tough films noir, like Robert Wise’s Born to Kill and Anthony Mann’s Raw Deal. Trevor stops the show with the near-torture scene of trying to sing Billie Holiday’s “Moanin’ Low”. The familiar story (repeated many times on TCM) is that Trevor expected some prep time for the song, perhaps a recording session, but instead was told to improvise right in a scene, with no time to think about how good or bad she should sound. The reward for that slice of performing reality was an Oscar.

Camerawork by Karl Freund and some elaborate sets place us in somebody’s idea of the Florida Keys. People say that it’s hot, anyway. The presence of the Indians is a progressive effort that gets a little muddled — the business about ‘doing bad for these people even when we try to help them’ doesn’t go very far. But that’s nothing compared to the ‘big story.’ If Bogart’s Frank McCloud is supposed to represent some kind of disillusioned veteran looking for a new direction, his character is more than a bit fuzzy. McCloud is a sharp, motivated guy, a super-duper hero in the mold of various G.I.s that didn’t worry too much when they came home and slept with or married women that may have been married or promised to their lost comrades… it wasn’t quite the sentimental quandary presented in The Human Comedy. I was almost expecting Frank’s big revelation to be that George didn’t love Nora any more, or at least that he didn’t die a hero. No, the movie plays it straight, almost as if being ‘true to the soldiers’ was a political necessity to protect Bogart and Bacall from further suspicion of left-wing sympathies.

The fuzzy character shows when Frank McCloud suddenly jumps up and makes a speech about being ‘out for himself and that’s it,’ denying any willingness to be a hero or to sacrifice himself to rid the world of Johnny Rocco. It comes out of nowhere, and then it goes back to nowhere — from then on McCloud still keeps acting for the good of the group. Of course, his big break comes from Gaye Dawn, the moll who performs a noble double-cross. Like I say, Key Largo is an instant classic even though it doesn’t add up to much. But we’ll happily settle for its handful of unforgettable scenes and performances. 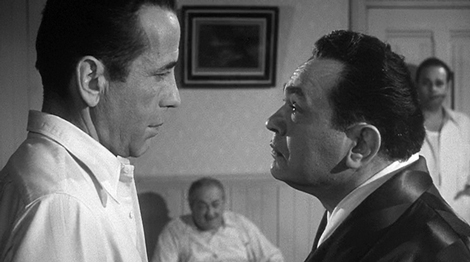 Is Key Largo even a film noir? To me it’s a flashback to the ’30s, with Johnny Rocco coming back to life like one of those prehistoric dinosaurs reanimated by radioactivity. There isn’t much in the way of existential anguish, and whatever soul-sickness we see in the characters’ eyes isn’t developed very far. The final shot of Bogie happily chugging back to shore, to a new home, a swell dame and a bright future, just isn’t noir. Arthur Penn would critique it 27 years later in a powerful neo-noir. Gene Hackman’s detective hero Harry Moseby in Night Moves has been similarly plugged with a bullet or bullets, but his predicament is much more dire. For a man with a big bullet hole in him, Frank McCloud looks pretty silly standing heroically at the wheel with a big smile on his face. Hackman’s sad sack detective is losing blood in a much more realistic way and can’t even make it to the wheel. His boat is just going in circles.

The Warner Archive Collection Blu-ray of Key Largo is a polished and powerful encoding of this B&W picture, looking clean as a whistle. Five minutes in, we forget we’re watching interior sets, even the broad miniature shots of the Key and the hotel being lashed by the storm. All that exacting special effects cinematography was by Robert Burks, who would soon be tapped for a decades’ worth of great camera work for Alfred Hitchcock.

The audio is also pretty powerful, with the WB shield slamming on with one of Max Steiner’s blasts of music. The sweet violins at the end always seemed a bit much, as did some of the over-emphatic stings when bad news is revealed, etc. But Steiner’s reputation was safe; when Dimitri Tiomkin began scoring noir thrillers, he went much farther overboard with the busy bombast.

The only extra is a trailer.