Pedro Almodóvar bounces back with an absorbing saga of a mother and daughter told in an interesting style. A woman feels isolated, powerless, alone and anguished about what has happened in her life. Is any of it her fault? Or is all of it her fault? How do we hold relationships together, or do they fall apart no matter what we do? Highly rewarding dramas still exist; they don’t all go begging for Oscar nominations… just learn to read subtitles and you too can find out how the rest of the world lives. 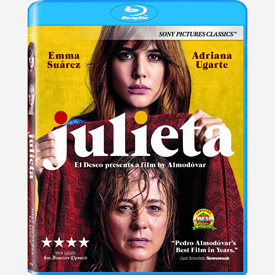 Pedro Almodóvar could now be the most well-known Spanish film director, surpassing Luis Buñuel, the surrealist hat has remained the giant name despite so many of his films being difficult to see. The post-Franco films of Almodóvar caught a wave of cultural liberation in Madrid. He began by tackling genre subject matter and depicting bizarre lifestyles, soaking his films in high style, bright colors and acting talent that made independent Hollywood efforts look dull. By the ’90s Almodóvar had segue’d into intense relationship pictures, often themed around the personal and family problems of women — but usually with some kinky angle to remind us that life, as he sees it, doesn’t follow the rules. His films continued to alternate between domestic fracasos and weird, often shocking sexual melodramas, but even his most extreme pictures retain a strong vein of human compassion.

Last year’s Julieta has attracted praise for not being about ‘bizarre people’ or depicting weird fantasies. Yet it still feels very ‘Almodóvar.’ It is based on three short stories from the collection Runaways by Alice Munro, a Canadian presently considered one of the world’s best short form writers. Many of her lean, spare stories are set in one Canadian province; we’re told that Almodóvar considered filming Julieta in Canada with Meryl Streep, before deciding to relocate the stories to Spain, where he felt more comfortable with the language.

The director found that he liked Munro’s sense of strangeness. He said that he took on the project because of a train scene that distilled life into just a few minutes — a meeting, a death, a conception. He was also intrigued by Munro’s ability to pull us into a story, and then leave us wanting to know more about ‘what happens.’ Julieta achieves the same sense of the unknowability of everyday relationships.

Like other Almodóvar pictures, Julieta can be pigeonholed as a soap opera or ‘women’s picture,’ but such descriptions sell him short. It’s an intimate study of the personal problems of a pretty Madrileña in her forties. Her problems unfold with a facility that makes other films seem crude. To maintain her sanity, she records the events of the past in her diary, and we see them unfold. Only one special trick is utilized — two actresses play Julieta, one for the present and one for the 1980s. As thirty years pass, we know that at some point Almodóvar must switch between them. 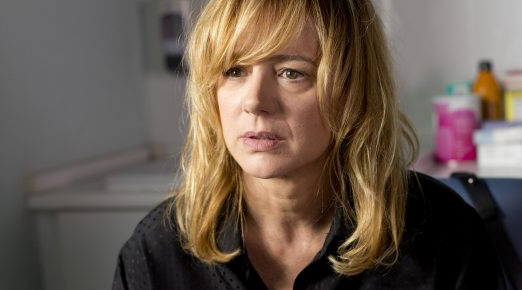 I’ll try not to spoil the story. Forty-something Julieta (Emma Suárez) has been in an emotional holding pattern for years, unable to commit to a new life with Lorenzo (Dario Grandinetti). This is because her daughter Antía (Blanca Paré) ran away at age eighteen, breaking off all contact, for no reason that Julieta can fathom. Julieta is just about to give up and leave with Lorenzo for Portugal, when she runs into Beatriz (Michelle Jenner), who was Antía’s inseparable teenage friend. Antía is apparently living in Switzerland, and has three children Julieta has never seen. Julieta’s anxiety and sense of guilt return more powerfully than ever, and she breaks off with Lorenzo, who doesn’t understand what’s going on. 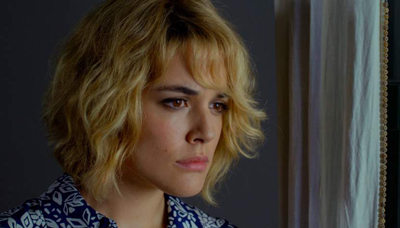 We then skip back almost thirty years, when Julieta was a student (played by Adriana Ugarte). A meeting on a train puts her in a relationship with Xoan (Daniel Grao), a fisherman whose wife is in a coma and is not expected to live long. Against the objections of Xoan’s housekeeper Marian (Rossy de Palma), Julieta arrives to live with Xoan anyway, and bears his child, Antía. But relationships refuse to remain as Julieta wants them to. Xoan may still be seeing Ava (Inma Cuesta), a local artist who fashions striking erotic sculptures. Julieta takes baby Antía to see her grandparents, and discovers that her mother Sara (Susi Sánchez) is bedridden and uncommunicative; her father Samuel (Juaquín Notario) has taken up with his pretty Moroccan housegirl. Finally, a tragedy in Xoan’s seaport reshuffles everything for Julieta, Ava and the now teenaged Antía … with all suffering from feelings of guilt, betrayal and confusion.

Almodóvar’s films often mix drama and comedy, but Julieta maintains an ’emotional suspense’ that’s no joke. Poor Julieta seems unable to fix her problems… are ‘life issues’ random and chaotic, or is some character flaw responsible? We find ourselves searching the film’s events and relationships for extra clues and hidden meanings not spelled out in dialogue. It’s a lot like real life, where absolute certainty about why people do things can be very hard to come by. Then comes self-doubt: have we been fully honest with those we love, or have we betrayed them in subtle ways? Are our feelings of guilt real or imagined? Do we hold other people accountable for ‘sins’ that we ourselves have committed? As in real life, people don’t automatically explain themselves, and when they do they’re likely to be unreliable witnesses. In literature and movie stories, we naturally try to make sense of events and relationships, and leave with a pat understanding of the big picture. In this show Pedro Almodóvar doesn’t give us that luxury — we know only what one person knows, Julieta. 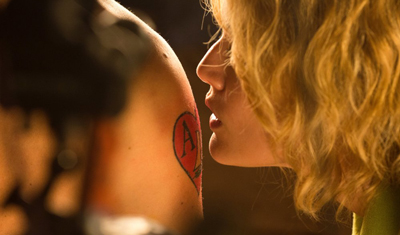 Julieta begins as a young woman of the trendy post-Franco years, with bright clothes and a flashy hairstyle. She avoids a man who makes an uncomfortable emotional appeal to her; yet she almost immediately gives herself to another young man with whom she finds she has a perfect chemistry. Is she being insensitive to the first man, and irresponsible with the other? Is a housekeeper’s bad habit of telling secrets the critical factor in a tragedy, or the faultless conveyance of information Julieta needs to know?

As in other Almodóvar movies, the leading lady finds herself in limbo, ‘between men’ or otherwise alienated from romance. The men go their own directions or disappoint in various ways. The real conflict is woman-to-woman, especially mother to daughter. What Antía does seems terribly cruel, but we know she’s no monster — we’ve just seen her care for the stricken Julieta as only a truly dedicated daughter can. Julieta is cut off from her own mother Sara, although on one night when Sara is lucid, they briefly share an exchange. The woman-to-woman bonds in Almodóvar stories are presented as the strongest human relationships. When there’s even a hope of repairing them, Julieta can live. 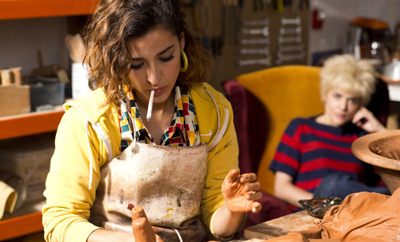 The strength of Julieta lies in its emotional maturity. Her fractured ties with the world aren’t some special dramatic circumstance. We all have broken personal connections, guilty secrets and mistakes that can be difficult to explain, even to ourselves. The film’s final image of hope resolves the most important issue… Julieta can recover.

The beautifully designed show again sees Almodóvar making remarkable use of bright colors to induce emotional responses. Yet Julieta is not as flashy or eager to dazzle as some of his earlier pictures. The writer-director is still in firm control of his storytelling, consistently coming up with scenes that seem utterly truthful. As the older Julieta, Emma Suárez spends much of the picture in a state of confused misery; at one point she’s so addled that she lets herself be hit by a car. She and Adriana Ugarte, the younger Julieta, of course look quite different, but Almodóvar pulls off an impressive identity switcheroo under a bath towel. 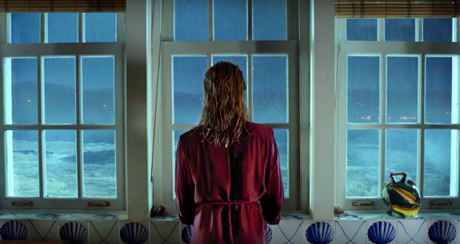 Once again Almodóvar’s knack for interesting casting pays off. An apartment concierge (Ramón Agirre) is shown a respect equal to that of the leading players. In older El Deseo pictures we looked forward to seeing returns of Pedro’s stock company of beloved actors; this time out all we have is (I think) the remarkable Rossy de Palma, who plays the pivotal part of a troublesome, slovenly housekeeper. Never fear… a photo of the remarkable Srta. de Palma’s actual present appearance, all dolled up, is just below.

Perhaps the best thing about Julieta is its transparency. The movie always looks good. It has pleasant scenery and an interesting set-piece scene on a train, but nothing gets in the way of Almodóvar’s close-quarters character study. Julieta suffers, and blames herself, but we can see that she’s a good person. The ‘other woman’ Ava is no enemy, but a sister with a shared love. Her daughter’s (intimate?) teenage friend is moved to tell Julieta the important things she deserves to know. And Julieta’s new man Lorenzo is an understanding, unquestioning saint. Almodóvar’s view of life is both forgiving and inspiring, and his message is that people have value.

In other words, the hell with comic book movies, pale remakes and predatory reboots. Pedro’s our guy. 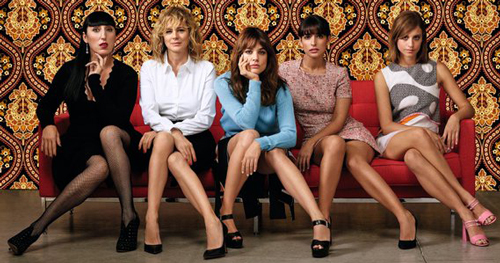 Sony Pictures Classics’ Blu-ray of Julieta is a stunning HD encoding of this handsomely designed, beautifully photographed show. Anybody still capable of following a human story, and reading a few subtitles, will be absorbed by it. The first image is a background of scarlet fabric that becomes kind of a curtain; the final is a lovely view of a landscape, which seems to declare that life still has opportunities.

Attractive music serves the film’s moods: upbeat, introspective and despairing. The film was shot on the coast of Galicia as well as in Madrid.

Sony opens the disc with a handsome montage of their Pedro Almodóvar feature holdings, which I think I heard number nineteen. Some of the good-looking clips are from older pictures that I’ve only seen in ratty VHS transfers. Criterion may be releasing more of them as well. The main extra is a making-of featurette.

Many Almodóvar movies strongly reference other works, such as Johnny Guitar in Women on the Verge of a Nervous Breakdown and A Streetcar Named Desire in All About My Mother. As far as I can see, the only reference in Julieta is The Odyssey. Classics expert Julieta tells part of the story, in particular Ulysses’ preference not to linger in a comfortable harbor with Calypso, but to continue on his dangerous adventure for its own sake. The full significance of this hasn’t soaked in yet. Julieta definitely makes some adventurous — and selfish — moves of her own early on. Perhaps her decade-spanning effort to reconstitute her lost family is meant to parallel Ulysses’ struggle to return to his kingdom and Penelope.