Bertrand Tavernier breaks the barrier between fans of European movies and 101 classic French pictures that most of us have never gotten a peek at. The key to this eight-hour film clip excerpt round-up is the hosting-curatorship of Tavernier — the fascinating miniseries has plenty to offer both fans that have never seen an old French movie, and some of us that thought (until now) that we knew something about them. The author and director is also a great storyteller, presenting his favorite underrated directors, actors & composers and putting them, in historical context (there was this 5-year occupation, see…). Tavernier is a deft film clip picker — all are riveting, none are spoilers, and you’ll come out learning fifty new French words, most of them clean. Highly, highly recommended. 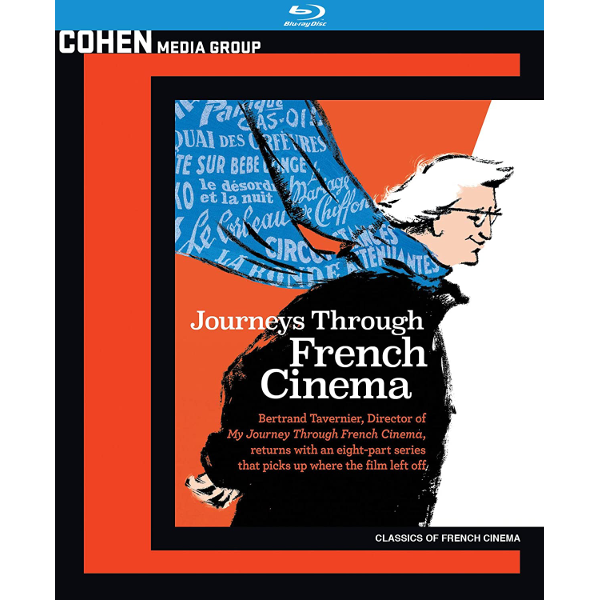 I’m sure there were plenty of excellent college courses in French film history taught out there, but the one I chanced upon at UCLA was not so hot — the first week we learned about Jean Renoir, saw La grande illusion, heard some talk about Poetic Realism, maybe saw Pépé le Moko… and then for the other eight weeks it was all about The French New Wave, which ‘broke rules’ and ‘redefined cinema.’

It wasn’t until the last ten years or so that I felt I really had access to any European film history beyond a few select classics, usually from the same heavy hitter art-house directors. Some Melville crime films made the rounds, but in pretty weak copies. When the digital remasterings of the last twenty years started coming in we were able to see and review more terrific French pictures: René Clément’s Les maudits, Gilles Grangier’s Le désordre et la nuit. ↓   The best I could offer for some of the marvels was a fair description of how exciting they were: ‘this a terrific movie experience… why isn’t this better-known?’

Bertrand Tavernier is a top French film director but also a great film writer and perhaps the continent’s most vocal expert on American film history — when we needed to ask about the ending to Kiss Me Deadly, MGM’s John Kirk sent messages to both Martin Scorsese and Mr. Tavernier. In 2016 he wrote, directed and hosted the compilation film documentary My Journey through French Cinema. The delightfully informal round-up featured classic moments from the top films by Renoir, Vigo, Carné, Cocteau, Duvivier, Becker, Ophuls, Melville, Varda, Godard, Sautet and others. His commentary made even the most familiar pictures seem fresh … in just under four hours the show was better than any college course I’d seen. 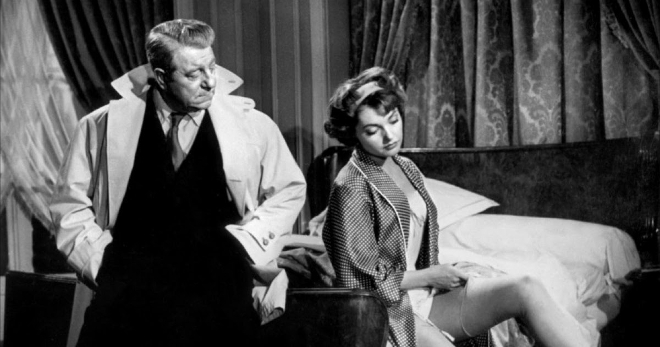 The brief opening montage for the nearly eight-hour TV miniseries followup Journeys Through French Cinema shows familiar clips from Casque d’Or, L’atalante and Alphaville but the episodes proper steer clear of most of titles that normally end up as Criterion editions. Tavernier doesn’t say so directly, but his miniseries exalts the cinematic graces of exactly the French moviemakers that the New Wave critic/directors condemned as hidebound, irrelevant. With storytelling skill and authoritative calm, Tavernier delves into appreciations of some fairly unfamiliar directing names. The first two segments of the eight-part series are dedicated to his Go-To Filmmakers, stylists whose films are every bit as technically sophisticated as those by Hollywood’s best directors. Without a Production Code to infantilize French movies, the characters we meet seem far richer as well.

Tavernier’s skill at choosing and editing film clips is phenomenal — nothing seems padded or clipped too tightly and our attention is held at all times. Organized by director and personal preference, we see the same actors returning again and again, in very different parts. Jean Gabin is all over the place, of course, but the most frequently seen star is Danielle Darrieux, who turns out to be a triple-threat actress, comedienne and singer. Also seen several times are Louis Jouvet and Bernard Blier, two names known here only by more experienced followers of French film. 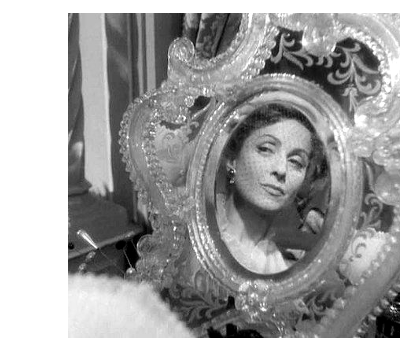 The episode Chansons examines the music and songs from the classic French ‘tradition of quality,’ which gives us a solid half-hour of amazingly effective spirit and sentiment. Our host-guide finishes that hour with a discussion of Julien Duvivier, a really versatile director that he praises almost as much as he does Jean Grémillon. Tavernier doesn’t just show a clip and say ‘this is a great scene.’ Each choice demonstrates something remarkable. I’ve found that writer director Sacha Guitry is a bit rich for me; his dialogue oriented films toy with the French language in ways that would need to be explained to me point by point. That, and his jokes don’t seem all that brilliant. Yet Tavernier compares Guitry directly to Quentin Tarantino, whose films are also heavily dialogue-driven.

We also see elaborate trucking shots that Tavernier compares to those in films by Martin Scorsese, except that the French examples are far more sophisticated. They don’t announce themselves. One by Max Ophuls runs for fifteen seconds before we realize that we’ve been lured into accepting the director’s spatial reality. In René Clément’s Les maudits, a trucking shot down the corridor of a real submarine is every bit as amazing as the shots in the much later Das boot, without the show-off factor.

Tavernier’s middle segments relate certain directors to French history, covering filmmaking just before WWII to the upheaval of the French New Wave. He handles the politics of the Occupation with great clarity, covering those talents affected most by the experience (Henri-Georges Clouzot) without beating any particular bias-drum. 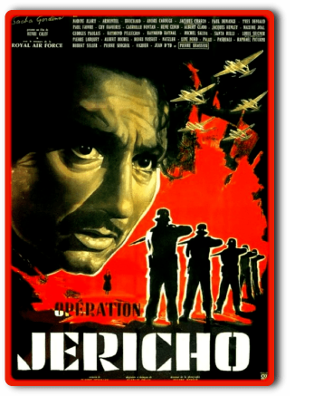 Even when championing directors he dubs The Forgotten Ones, those he thinks have been wrongly discarded (by those New Wave critics, again) Tavernier finds some really striking gems. The movie Jericho was made by Henri Calef, a director in critical disfavor. The epic about the Resistance insists on a ‘group identity’ instead of fashioning a fiction with specific heroes. In one scene a Resistance combatant explains why he will never forgive the Nazi occupiers, and wants them hunted down to the last man. He doesn’t care what God says he should do.

The same director’s later L’heure de la vérité stars German Karl Böhm, who is probably the only actor who would take the part. Seeking to honor the good life of a concentration camp survivor who emigrated to Israel and spent years performing philanthropic deeds, some investigators discover that he’s actually a Nazi officer who disguised himself to escape punishment. The Israeli authorities must decide if the only justice is vengeance, or if a man can atone. Tavernier’s miniseries has made me especially keen to see Jericho and The Hour of Truth, even though I’m pretty sure nobody I know has ever heard of them.

Which of course makes them even more attractive.

Bertrand Tavernier uses most of his time to highlight directors he feels are the soul of French filmmaking, yet are Forgotten or Underrated. He shows clips of the filmmakers at work and segments of older interviews that help illuminate their special qualities. Giving the directors faces and personalities enhances our appreciation. Some are more personable than others, but all seem intent on pursuing their art. A large part of one segment is dedicated to female French directors. There seem to have been only two or three in the sound era before Agnès Varda, but they’re real firebrands. One woman director’s scenes express some eye-opening opinions about sex, and another set of clips reveals an openness about lesbianism that’s way over anything I’ve seen in an English-language film. The notion of ‘unacceptable’ content in need of ‘cancellation’ never comes up. 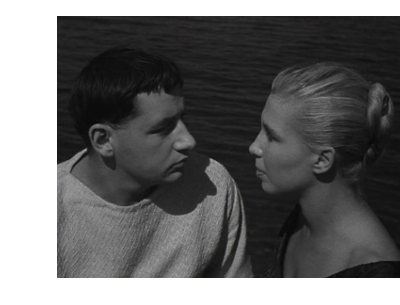 At the end Tavernier regrets not having time to cover certain director personalities, like Georges Franju. But he touches upon great works by Raymond Bernard (Wooden Crosses) and points out that René Clément was perhaps less appreciated because his films were so diverse — Bataille du Rail, Jeux interdits, Gervaise, Purple Noon. ↓   I can usually tell what libraries were accessed for documentaries that use American film clips, but not this French mini-series. Did Tavernier skip Clément’s This Angry Age because he saw nothing valuable in it, or because clips were unobtainable?  What we see is so satisfying, we don’t think to ask that question.

I particularly like the critical reserve shown by Bertrand Tavernier — he’s not trying to make himself the Final Authority, professing a lofty final statement about ‘The Shape of French Film.’ There is in fact no final montage of highlights or grand examples. That would only bring us back to his opening statement about the pitfalls of film criticism: ‘all films are equal but some films are more equal than others.’ He appreciates and admires cinema without undue discrimination, neither by commercial achievement nor artistic opinion. He’s such an unaffected storyteller that I found it easy to follow his line of thought through the entire series.

Cohen Media Group’s Blu-ray of Journeys Through French Cinema is a 2-disc set with a little less than four hours of quality HD video on each disc. The original French TV broadcasts from 2017 and 2018 were divided into ten parts. I can only guess at the reason for the redistribution of content. Were some clips and segments not licensable outside of France?

Tavernier wisely lets the film clips speak for themselves. The shows don’t go in for fancy transitions or editorial tricks. The film clips are kept separate, and unedited; film soundtrack music doesn’t bleed over other material. The editing is well-judged but never draws attention to itself. In other words, all the devices I was taught to make so-so movie content seem more exciting in ‘docu’ featurettes for DVDs, are not used. These excerpts don’t need them.

Tavernier speaks in color widescreen HD video scenes and almost all the of the clips are in B&W. A couple of features excerpted exhibit experimental or discarded color processes, which are interesting in themselves. With only a few exceptions the clips are of excellent quality, equal to the latest Blu-ray remasterings and restorations.

It helps if you’re a film fan tempted by ‘exotic’ foreign fare and sensitive to quality filmmaking of the past. If so Journeys Through French Cinema will take your head off. I saw about half of the show on TCM a year or so ago and jumped at the opportunity to review this … I can’t wait for my daughter to visit so we can see some of it together.

One note may be of importance to French-speaking buyers that don’t need the English subtitles: the subs are burned-in and cannot be removed Just sayin’.