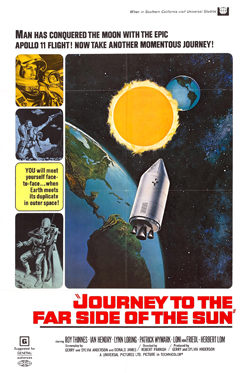 Journey to the Far Side of the Sun

A sleek and smart sci-fi thriller that vanished into the cosmos due in part to the supernova that was 2001. Known as Doppelgänger in its original British release, the film starred Roy Thinnes as an astronaut with space-time continuum problems. Directed by Robert Parrish, the film was produced by Gerry and Sylvia Anderson of Supercar fame – which explains the obsessive attention to detail.