3-D IMAX goes back to outer space for a repeat of some space shuttle material and an extended CGI look at how a Martian landing might be accomplished. It’s a grab bag of film sources, and only partly in original 3-D material. Shout! presents it in both 4K Ultra-HD and Blu-ray 3-D, but so far the 4K disc format hasn’t a 3-D option. 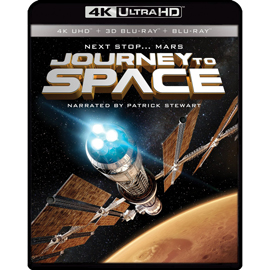 IMAX shows can be grand experiences, especially in 3D. Shout! Factory has put out a number of Blu-ray and 3D Blu-ray shows of this kind, and with the arrival of 4K Ultra-HD players, has jumped into the fray early with Journey to Space. It’s being offered in two packages. To get the 3D version, one must buy the 4K Ultra HD version. 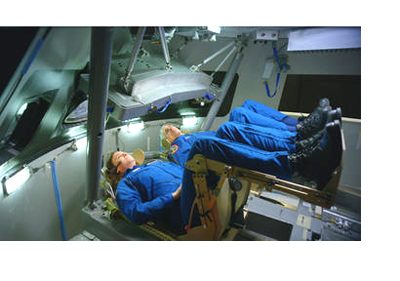 IMAX shows seem to have taken over the entire theatrical nature docu format, just as The Discovery Channel and others like it have knocked out the older, quality science TV shows like NOVA and National Geographic presents. The roughly 45-minute format is of course primarily concerned with giving ticket buyers an impressive audio-visual experience. But the shows are never unintelligent, even if they pitch their messages at a low science threshold. Shows that show off military and, like this one, space hardware, are heavily sponsored. Parts of Journey to Space play like an ad for Boeing. There’s also a generous helping of PC attitudes. The wondrous future of space is brought to us by astronaut Serena Auñón, and a woman engineer helping to design a very cool space suit. Since so much of director Mark Krenzien’s script seems meant to inspire the children in the audience to take the Sci-fi oath and fly to the stars, there are no paunchy middle-aged engineers standing around or peering through bifocals.

The narrator is Patrick Stewart, whose reassuring voice seems convincing, because we all know he’s experienced in space travel at warp speed. The show first celebrates the legacy of the Space Shuttle program, with gloriously beautiful launches and images of astronauts and cosmonauts deploying satellites, working on the Hubble telescope, and building the International Space Station. As it’s an overview we see mostly decorative shots of people playing on board the ISS, exercising in their stationary bicycles and, for the 3D camera, throwing things at the lens. Then we get to the R&D being done for the future mission to Mars. A new kind of capsule is being worked on, and dropped by parachute for tests; a Mars rover concept is seen driving across a patch of desert. The niftiest bit of hardware we see are new spacesuits that people climb in and out of through a backpack-like hatch. This hatch plate locks into entrance ports on spaceships or rovers, allowing the astronaut to enter and exit the suit without contaminating spaceship interiors with Martian dust. It also eliminates the need for an airlock, at least for normal excursions. 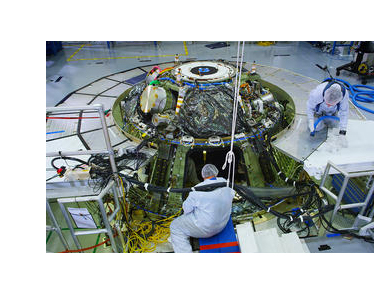 We spend several inspirational minutes with the current astronaut cadets. They are terrific adventurers all, yet, one suspects are tasked with being public relations boosters for the program as well as applying their impressive skills — engineering, medicine, astronautics — to the challenge of the future. The show acknowledges the exciting entry of private enterprise into the field of space exploration, but doesn’t touch on the stories in our newspapers of the heated struggle to secure the limited public funds set aside for space research. While touting our incredible robotic missions, the show cuts off any dissent with the line that men must go to mars because we are an ‘explorer race.’

The close-out of the Shuttle years concentrates on the flyovers of the shuttles being taken to various museums — I witnessed the jumbo jet carrying one of them over Hollywood in the summer of 2012. Astronaut Chris Ferguson takes over narration duties for a section showing the Endeavour being delivered through the city streets to Exposition Park. We are shown some designs for new space vehicles and a monster rocket being built to hurl huge payloads into orbit — but most of what we see is digital imagery. The docu is fuzzy about how much of this hardware is still just on the drawing boards.

The final act concerns the proposed flight to Mars, which one of the astronauts hopes will happen while she’s still in service. A super spaceship with an inflatable area for cargo and ‘living room’ for the Mars Voyagers will make a very long trip to the neighbor planet. We see the plans for the mission as good-quality CGI animation. 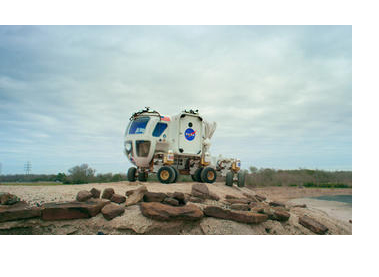 As presented, the Mars mission resembles fairly closely the concept proposed way back in 1955, in Walt Disney’s pioneering Man In Space TV special, a fantastically effective docu that prepared America for the coming era of space exploration. The pre-NASA experts advising Disney had foreseen nuclear-powered spaceships, something that never came about because of the obvious danger of an accident — an exploding spaceship could spread radioactive material into the high atmosphere.

IMAX’s docu mentions alternate forms of propulsion but for the planned mission will be using conventional rocket technology. The scenes showing a proposed Mars ship landing, exploring and returning are very interesting.

As explained in the making-of featurette, only half of Journey to Space is organic 3-D material, and much of it comes from earlier IMAX shows. I think I remember seeing the space station shot of a weightless astronaut being handled like a soccer ball, from an earlier show called Space Station 3D. The launches are also spectacular, and appear in to be organic 3D. Quite a bit of connecting material comes from whatever kinds of video sources are available, and often play in insert morticed boxes, smallish in the frame. 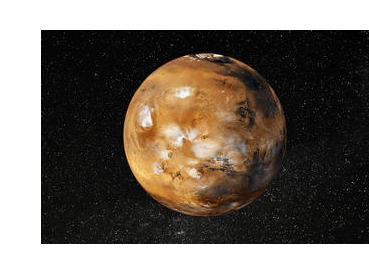 Finally, almost every time we see space scenes not obviously taken from a space walk, or the cargo bay of the Space Shuttle, we’re looking at slick computer animation. If you see spaceships and bright stars in the same shot, it’s animated. Shots of distant galaxies have superimposed moving stars, and a truck-in to Mars looks like a scene from Star Wars. The shots are really nice, and they’re needed to depict future events with technology that doesn’t yet exist. Yet the problem is that it’s not always easy to know if we’re looking at reality, or the vision of an artist and animator. Casual viewers will believe that the colossal Mars rocket (the top, big image on this review) already exists. And simple things like depicting cosmic rays with flashy animated special effect ray blasts is counter-productive — the show stops being a docu and becomes Sci-fi.

Journey to Space is an impressive but lightweight ‘gee-whiz’ show that stresses the great adventure in a way that will make converts to the cause of space travel. Wouldn’t it be nice to not have to expend 70% of America’s wealth on war and killing? We could easily afford to put some decent social programs in place, rebuild America’s infrastructure, AND take inspirational scientific voyages to the end of the universe. For now, I say, ‘send robots.’ 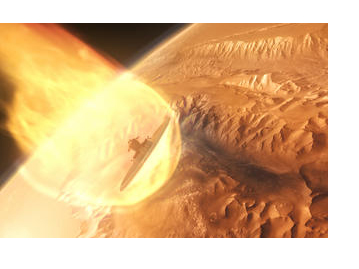 Shout! Factory’s 4K Ultra-HD +3D Blu-ray + Blu-ray of Journey to Space is a two-disc set. The 3-D is marvelous on the shots of rocket launches, the space station in orbit and the research centers. I want to go back and look at that prototype space suit again. The passages of montaged 2D material displayed on smaller screens looks good, but it certainly defeats the ideas of IMAX and 3-D. The 3-D animation is excellent, but it’s still just a high-quality animated cartoon. My favorite IMAX experiences so far have been shows that look at ordinary things in nature — animals, bugs.

And what of the 4K Ultra HD transfer? It does look different, much like the displays at high-end video stores. Instead of 1080p, it’s 2160p. I watched a few minutes of Journey to Space on a large monitor at a video store and was quite impressed; the colors seem richer and more varied. And to think that my 4K monitor at home is ready for this… if providers begin offering movies I want to see, I might spring for the new format, if the player will also play 3-D HD. I haven’t heard of any plan yet to come out with a 4K UHD 3-D system — could that be awaiting new technology for glasses-free viewing? I find my passive-glasses 3-D setup is no bother whatsoever.

To my thinking UHD is gorgeous and Shout!’s disc plays very well. The package says that the encoding includes 4K SDR and 4K HDR. If I understood the difference I might have known which one I was looking at !