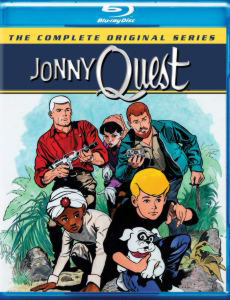 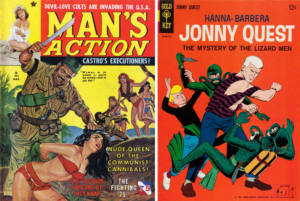 Though the heartland was nearing a showdown between the Masters of War and the Age of Aquarius, things were relatively status quo in 1964, Beatles or no Beatles. Dad could still be found daydreaming over the garish macho fantasies of Men’s Action magazine while Junior was in the rec room hypnotized by Jonny Quest – a weekly cartoon show flaunting the same retro thrills found in the old man’s rags but aimed at the sandbox set. Jonny lasted just one season, from September of 1964 to March of ‘65, but the combination of pulp fiction mayhem with junior league heroics would transfix a generation. 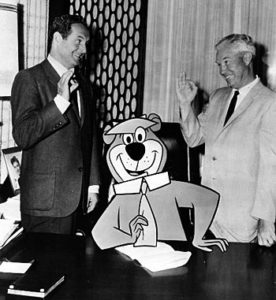 Jonny’s producers, William Hanna and Joesph Barbera, made their move to the small screen in 1957 when MGM shuttered their faltering animation unit – goodbye Tom and Jerry, hello Yogi Bear. A year later the duo, now officially Hanna-Barbera, had settled into Charlie Chaplin’s former studios and was manufacturing economical cartoon shorts for syndication. In 1960 they cut a deal with ABC and changed the shape of prime-time with The Flintstones, a caveman comedy inspired by The Honeymooners.

Emboldened by their success (The Huckleberry Hound Show won an Emmy and it took Homer Simpson to knock Fred Flintstone off his thirty year reign in the ratings) Hanna-Barbera hired comic book writer and artist Doug Wildey to update a popular radio show about the rough and tumble adventures of a globe-trotting teen – Jack Armstrong, the All-American Boy. 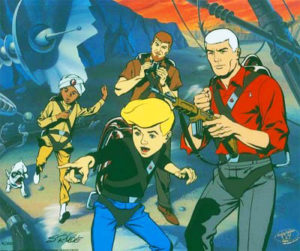 Wildey, known for his hard-edged line work on The Saint newspaper strip, was asked to visualize a more realistic approach for the new show but the rights to the Armstrong character were in flux – so in one late night session Jack became Jonny while retaining the former’s corn fed personality and brash demeanor. Wildly distilled a half-century of science-fiction novels, monster movies and World War II cliches into 26 frantic episodes – writing and storyboarding the majority of the shows while making sure every episode was stamped with the Wildey brand.

Wildey’s draftsmanship could be crude yet the jagged shadows, painterly backgrounds and dynamic compositions set the show far apart from the usual Saturday morning fare (Space Ghost artist Alex Toth, who provided concept art for Quest late in the show’s run, described Wildey’s portfolio as “heavy ammo”). For the moment Yogi would only be glimpsed in the rear view mirror. 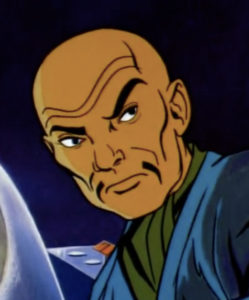 Thanks to late night movies and musty comic books, media-savvy kids of the early 60’s had already absorbed the fraught history of pulp fiction by the time Jonny Quest arrived on the scene. The show’s weekly anachronisms – fez-wearing schemers, bloodthirsty cannibals, the Fu Manchu rip-off – were all villains from another generation but still useful scapegoats for race-baiting politicos – especially in 1964 (a month before Quest debuted, the Gulf of Tonkin crisis provoked a disastrous escalation in the Vietnam war.)

With titles like The Mystery of the Lizard Men, The House of Seven Gargoyles and The Curse of Anubis, Wildey delivered the excitement of a Saturday matinee on a Friday night – pterodactyls, hovercrafts, rejuvenated mummies, jetpacks – each episode was different but the same – compact cliffhangers in which no one’s attention span was challenged and all conflict was neatly resolved in 25 super-charged minutes. 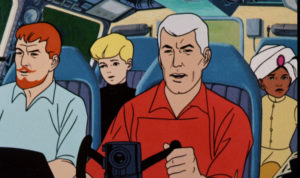 Jonny – voiced by future Faber College grad Tim Matheson – was a hyperactive thrill-seeker with a blonde bouffant and black turtleneck – a junior high Tom Swift. Jonny was the show’s focus but Wildey assembled a Boy’s Life fantasy league for his supporting cast – what was fundamentally an exclusive men’s club.

Young Jonny had two dads – his father was the brilliant scientist Benton Quest – with all the weight of the CIA behind him – and Race Bannon was his bodyguard – a white-haired, less musclebound Doc Savage. Benton provided the brains, Race the brawn. Jonny’s best (only?) friend was Hadji, a young mystic from Calcutta and Dr. Quest’s adopted son. Their island home was nothing less than paradisiacal – an atoll in the South Pacific with a private jet always on standby – the perfect pipe dream for itchy adolescents and discontented dads stuck on the couch. 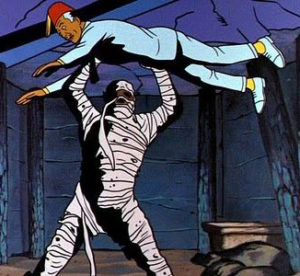 Each show was energized by Hanna and Barbera’s seasoned direction and animation director Charles A. Nichols’ clever cost-cutting tricks which gave the illusion of more movement than the budget could afford – but the show’s not-so-secret weapon was Hoyt Curtin.

Curtin was responsible for the cheerfully rinky-dink background music for all of Hanna-Barbera’s animation output but when a catchy title tune was needed, the man delivered (his snazzy big band arrangement for Top Cat was so electric Elvis Costello sampled it in concert). None of that prepared audiences for the composer’s Jonny Quest theme, fueled by hard-charging drums and a heart-pounding horn section that would not be out of place in a Bond film. 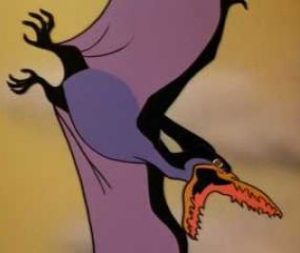 Jonny was canceled in 1965 due to its unsustainable budget – but the series was also beginning to struggle with uninspired storylines and a general feeling of malaise, even with the likes of Everett Sloane contributing voice overs (he starred in one of the show’s most memorable episodes, Turu the Terrible, about a crabby recluse and his pet pterodactyl).

Still, Hanna-Barbera persevered, to put it mildly, ruling the cartoon roost with increasingly preposterous/surreal Saturday morning fare like Birdman and the Galaxy Trio and The Herculoids. 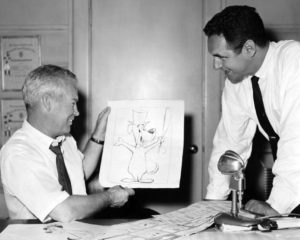 The duo’s star continued to rise (Scooby-Doo has become a franchise unto itself) while the advent of Cartoon Network and Boomerang brought back Yogi and friends front and center. In 2001 Hanna-Barbera was absorbed by Warner Bros. Animation – which explains in part how Jonny Quest made his debut on Blu ray.

Warner Archives has done a grand job bringing Jonny Quest: The Complete Original Series to the high def domain. The image is immaculate and while the colors don’t exactly pop, that’s because Wildey’s palette tended toward the dark side, all the better for the Weird Tales storylines.

Warners drops a few extras on the third disc of this three-disc set, each first appeared on the 2004 DVD release –