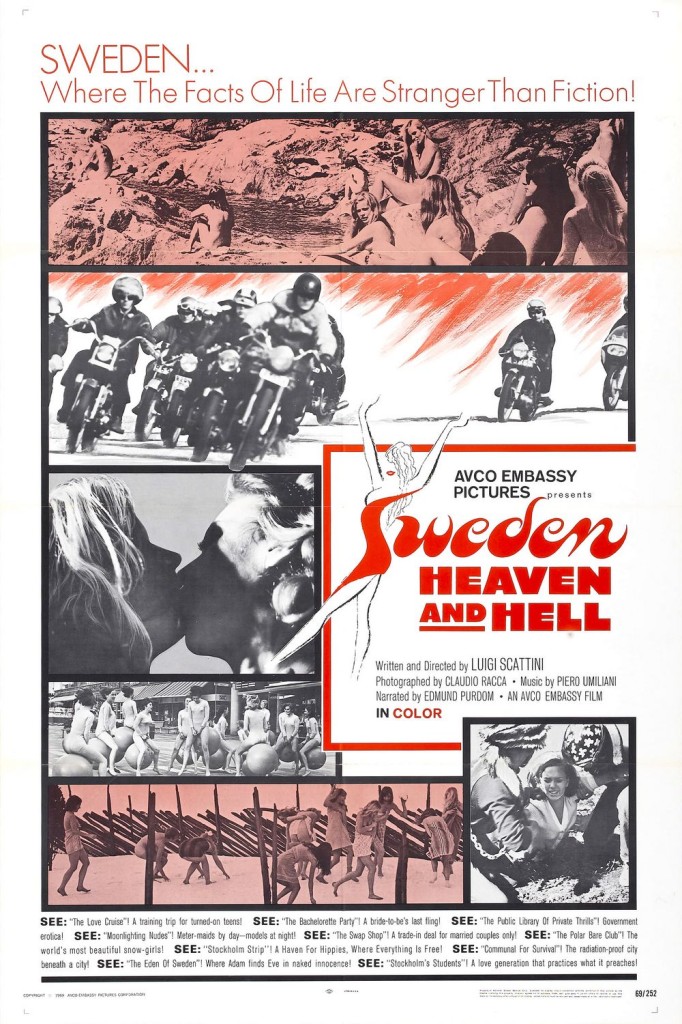 The publicity attendant to Sweden’s I AM CURIOUS (YELLOW) will doubtless boost the appeal of this Avco Embassy import among those craving voyeurism, Swedish style. This is not to say that SWEDEN, HEAVEN AND HELL is as explicit as CURIOUS, but it’s definitely “dirtier” in tone and intent, and boasts even more provocative angles. The most profitable market for this obviously artificial Italian-made “documentary” (a sort of MONDO HELGA) will be the drive‑ins and sexploitation grinds, but with heavy promotion, it could wedge into wider playoff and perform quite well in general metropolitan situations.

Calculated to shock middle‑aged conservatives, the P.A.C. Caravel Production is the kind of hypocritically moralistic picture which deplores debauchery while wallowing in it. Taking a determinedly lurid approach, it sees liberal Sweden in terms of declining Rome, morality crumbling everywhere, and full of hedonistic degenerates who “think they are happy.” Luigi Scattini’s leering, loaded narration, read by actor Edmond Purdom, and the former’s obviously staged direction will prove thoroughly unconvincing to sophisticated viewers.

In patently titillating manner, and for no discernible purpose, it “depicts” the evils of permissiveness in Sweden: sex education, leading directly to wild immorality, with contraceptives available by vending machine; a gang rape by Swedish Hell’s Angels types (“raped in the dirt by two, or three, or five of the pack”); exploration of adoption problems (an excuse for a childbirth scene); TV interviews with teenage girls who reflect on their first sexual experiences at ages six and up; teenagers who make out freely in front of helpless parents; Swedish women’s preference for black males (“more primitive, more to the point”); wife‑swapping clubs; lesbianism; pornography; rampant alcoholism, with derelicts eating shoe polish for its alcohol; the obligatory drug sequence; and plenty of nudity. 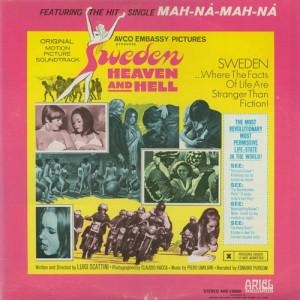 Effusively condemning “the paganism of physical life,” the narration hysterically mentions “suicide” at every opportunity, as if to show the wages of sin. The one substantial topic it touches briefly upon is an underground atomic shelter where children are being prepared for the inevitable post‑nuclear war world, which chillingly recalls the nearly similar situation in Joseph Losey’s THESE ARE THE DAMNED. Piero Umiliani’s score sounds at odd moments like “What Kind of Fool Am I?”

[The original Italian language version of this film is currently available from some mail-order sources, such as European Trash Cinema. The English-language edition has not resurfaced since the film’s theatrical engagements. —TL]