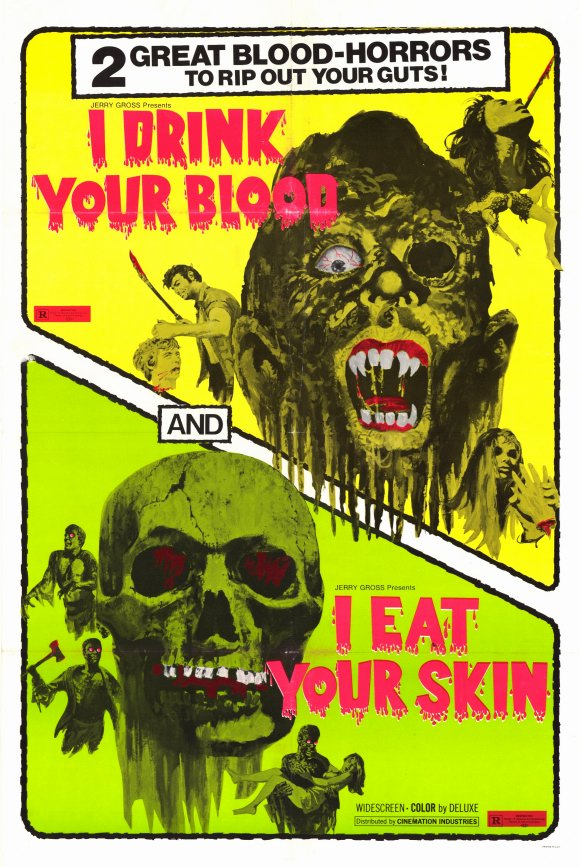 On the basis of title alone, I DRINK YOUR BLOOD (currently being doubled with I EAT YOUR SKIN) holds some potential for ‘horror‑oriented ballyhoo and drive‑in markets, although heavy cutting to avoid an MPAA X has reduced the continuity to the consistency of Swiss cheese. Not at all badly produced by Jerry Gross, the Cinemation Industries release looks like it could have been another NIGHT OF THE LIVING DEAD in terms of ghoulish suspense, but virtually all of what must have been bone‑crushing violence has been clumsily excised, eliminating the cause of most of the fear and turning a potentially ferocious thriller into a frustrating exercise in splicing.

Hindu dancer Bhaskar, a sort of Sabu gone wrong, plays the Manson‑like leader of a nomadic hippie devil‑worshipping sect which moves into a nearly deserted town and terrifies the residents. When his sister is raped and his grandfather is fed LSD and stomped, resourceful 12 year‑old Riley Mills injects rabid dog blood into meat pies intended for the cultists, who go mad as soon as they eat them. A nearby construction crew contracts the disease from gang‑banging one of the girls, and pretty soon almost the entire cast is foaming at the mouth, running amok and hungry for human flesh. However, crude and tasteless David Durston’s script may be—and it’s both, in spades—he directs it with a raw force and pace which might have paid off, were it not for the incessant build‑ups to horror scenes that never appear. 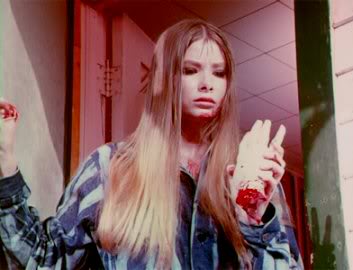 By the end, some real suspense is built up as the boy, his sister and her boyfriend are trapped in a car by the rampaging monsters, but a series of splices intervenes and after some policemen save the day we find the car has been turned over and the boy and his sister are okay. Having noted that the boyfriend had disappeared from the film, this reviewer made a check of the photo blow‑ups outside the theater, which revealed that his head was severed by one of the monsters during the deleted climax. Despite all this, the film should do business in its intended market. And any picture which actually visualizes one of the prime youth nightmares of our time—a horde of literally rabid, axe‑wielding hard‑hats hunting down members of the younger generation—must have some claim to redeeming social value.