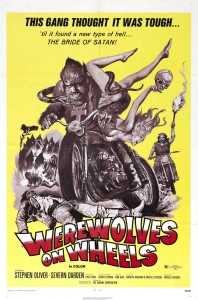 Armed with what must certainly stand as one of the greatest schlock titles in movie history, Werewolves on Wheels is likely to be a ballyhoo and drive-in market smash on that alone. It hardly matters that the Fanfare Corp. release itself is far from the harmless fun picture it sounds. In fact, it’s an incoherent, nearly plotless jumble of repulsive cycle-bum viciousness and humorless vulgarity that seems seriously and squarely aimed at imbeciles. It’s highly exploitable, but pretty ugly entertainment. Director Michel Levesque and co-scenarist David M. Kaufman nervily take screenplay credit for the bald series of non-incidents that makes up the film—with no werewolves on view until the last reel. The Devil’s Advocates, a cycle gang full of the usual creeps and retards, takes time out from its daily routine of raping, slashing and looting to raid a monastery loaded with hooded, soot-flecked Satanists who have enticed sexy gang “mama” D.J. Anderson away to perform lewd naked snake dances during devil worshipping incantations.

The gang gleefully decks most of the celebrants and speeds off to hold more orgies and blow more dope. Every so often, a dark shape sneaks up and slits a throat or gouges an eye, but otherwise the gang’s adventures are on the familiar side, and mostly consist of setting fire to old cars and beating each other up. So it goes until the last 10 minutes, when, for reasons too incomprehensible to fathom, gang leader Stephen Oliver and Miss Anderson both turn into fuzzy, slavering werewolves (and about time, too). Both are all too quickly dispatched by the gang, which then returns to the monastery to wipe out the Satanists, who turn out to be either duplications of themselves or dead gang members, it’s difficult to tell—or care.

Other bits of presumed artiness are injected along the way to equally flaccid effect by director Levesque, who doesn’t seem to have any idea what he’s doing. Severn Darden, second-billed, is unrecognizable in a bit as the head devil-worshipper, while trivia devotees will note the presence of ex-rock singer Barry McGuire and FATHER KNOWS BEST alumnus Billy Gray as moronic cyclists. None of this is much fun, but it does make for a swell title—and, incidentally, a terrific one-sheet.