On August 20, 2017, Jerry Lewis took a pratfall off this mortal coil, presumably knocking an unwitting dowager on her keister and sending a surprised cop into an open manhole on his way out. The durable enfant terrible was all of 91 years when he finally left the building though he had been making spirited public appearances as recently as January of this year.

For the inquisitive Jerry fan, Shawn Levy’s 1997 King of Comedy: The Life and Art of Jerry Lewis, remains the first and last stop for the straight scoop on America’s premiere nudnik. Levy, who endured the full fury of the comedian’s legendary wrath to get his story, is as admiring of his subject’s accomplishments as he was repelled by his whiplash mood swings. The hard knock apprenticeship in the Catskills, the Freudian-fueled soap opera of his partnership with Dean Martin, the boastful sex-capades, they’re all there and then some. 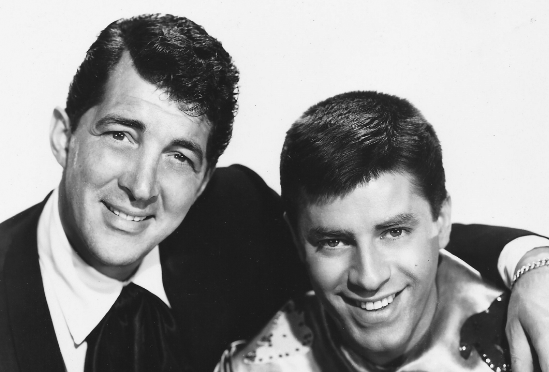 In the midst of that break-up with the emotionally detached Dino, Jerry found the will to turn his separation anxiety into one of the most successful careers in movie history, indeed Jerry wouldn’t achieve full “Hey, Laaaady!” status until their contentious collaboration finally crashed and burned. Out of the smoking remains of the Martin-Lewis blow-up arrived 1957’s The Delicate Delinquent and the birth of the fully formed “Jerry Lewis”. 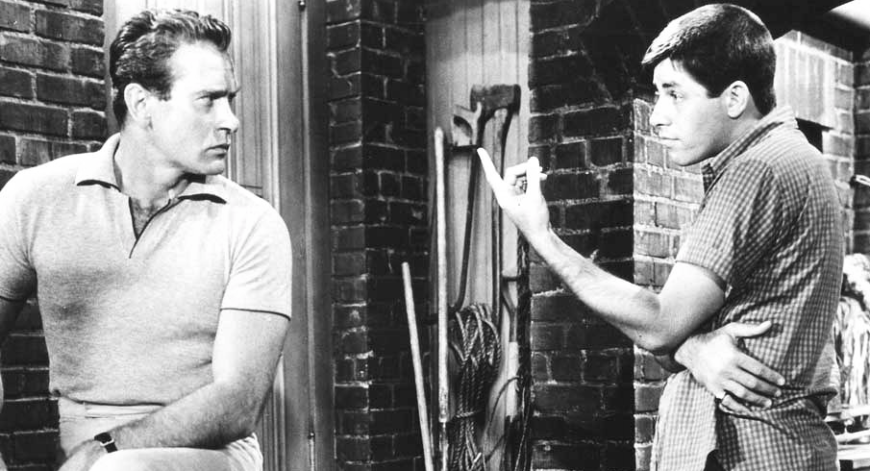 Before the break-up Dean had been scheduled to play the role of the good-hearted cop who reformed Lewis’s teenage malcontent but the part landed on the shoulders of the reliably even-tempered Darren McGavin, at that stage in his career a likable but colorless up and comer. The Delicate Delinquent, produced at Paramount for just under $500,000, made around $6 million at the box office… sans Dino. With that, the solo career of Jerry Lewis was off to the races and Delinquent’s remarkable success was followed by a series of admittedly standard though no less financially successful Jerry-mandered comedies including 1958’s Rock-a-Bye Baby and 1958’s The Geisha Boy. 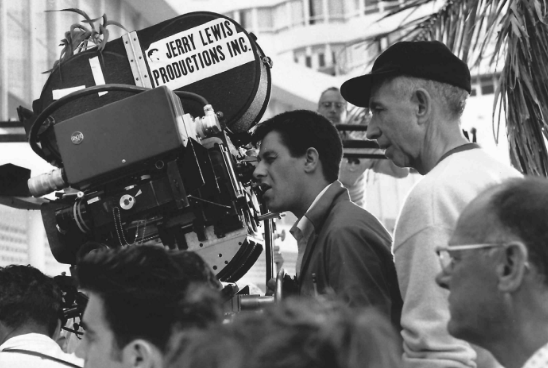 Lewis seized complete control of his career in 1960 with The Bellboy, a nearly plotless farce about a few days in the life of a luggage-toting schmo hurrying through the upper crust suites of Miami Beach’s plush Fontainebleau Hotel. It was the opening volley in a series of faux-everyman comedies in which Lewis invested himself in not only the direction of the films but their casting, budgeting, storylines and screenplays. The results were a energetic mix of kid-friendly comedy and composer Walter Scharf’s big band pizzazz in which the worm always turned and got the girl to boot, solidifying the enduring vision that was Jerry Lewis which moviegoers and telethon watchers would carry to their grave.

They were unusually ambitious productions, both stylistically and conceptually, beginning with the hour and twelve minutes of wordless black outs in The Bellboy and followed by the enormous dollhouse constructed for 1961’s The Ladies Man in which Jerry, as the emasculated handyman Herbert H. Heebert, managed to service a veritable harem of Tinseltown sex-kittens. 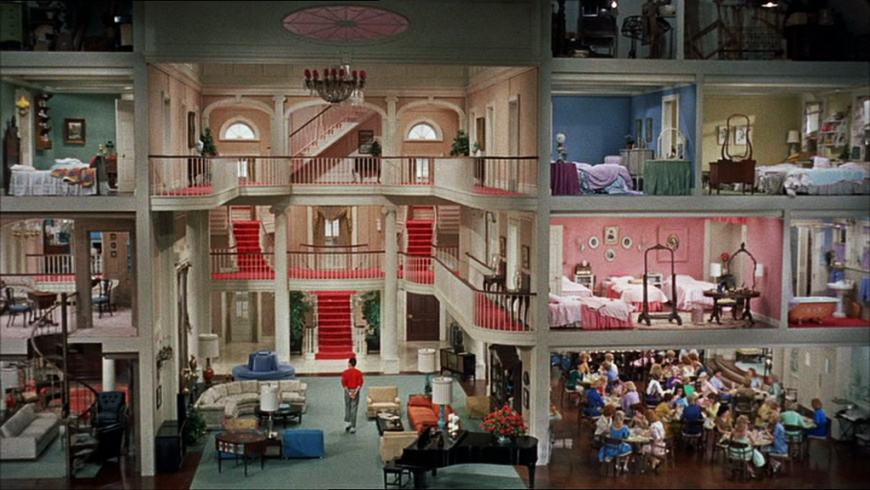 The films were animated by inspired sight gags, supporting casts filled with memorable character actors and the usual Lewis sycophants plus, of course, the convulsive exertions of Jerry himself, the ruinous physical effects of which would remain till his dying day. And then there were the gruesome displays of self pity and petty grievances, an itch that the rancorous funny man could never stop scratching.

In 1973, Time Magazine touted both Last Tango in Paris and Marlon Brando with the headline, “Self-Portrait of an Angel and Monster” but Jerry had already laid claim to that title ten years earlier with his own confessional in 1963’s The Nutty Professor. As Julius Kelp, a sweet-natured klutz who dreams of being anybody other than the buck-toothed loser he spies in the mirror, Lewis both transformed and revealed himself as the brilliantined libertine Buddy Love, a low-life lounge act by way of Plato’s Retreat. It was the two faces of Jerry writ large, an inspired performance made more poignant by the realization that Jerry seemed to despise the creepy Casanova as much as we did. But the final shot of Kelp’s fiancée securing the formula that can change the good-natured scientist back into the demonic Buddy suggests that Lewis was, as usual, of two minds till the bitter end.

After the triumph of The Nutty Professor, Jerry’s career began to flail and sputter with repetitive gagfests like 1965’s The Family Jewels and 1967’s The Big Mouth. In an unusual display of self-awareness, he made tepid attempts to remake himself as a conventional leading man in lame-o sex farces like 1965’s Boeing Boeing and 1966’s Three on a Couch, beginning a decades long career spiral that was brought up short by his lacerating turn in Martin Scorsese’s King of Comedy in 1982.

Lewis’s formidable successes and inevitable failures might best be understood through the lens of his acrimonious bust-up with Dean; once that rocket ship fell to earth he simply brushed himself off and replaced the easy-going crooner with the movie-going public as the designated victim of both his demands for love and his passive-aggressive tantrums. That so many in the audience would react as did Dean didn’t seem to faze him, in Jerry’s mind he probably felt like he gave too much. In some respects, perhaps he did. Thanks for all the laughs, Jer. 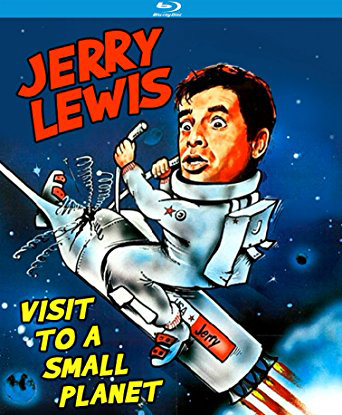 Kino Lorber’s new blu ray release of Lewis’s cosmological comedy Visit to a Small Planet reminds us that there’s not much in the way of high-def Jerry available except for a few loose apples including Rock-a-Bye Baby, The Geisha Boy and Warner Bros.’ eye-popping special edition of The Nutty Professor.

Directed by Norman Taurog, Small Planet is a toothless satire primed to take on the military-industrial complex with a jaundiced look at America’s never-ending fascination with war games. From a play by Gore Vidal, the original production debuted on May 8, 1955 on Goodyear Television Playhouse and was revised for a Broadway run in 1957. Both the TV and Broadway productions starred the Anti-Jerry Lewis, the honey-voiced Cyril Ritchard, a fastidious Australian stage actor best known for his brazenly foppish interpretation of Captain Hook in Broadway’s fabled 1954 production of Peter Pan.

According to the blu ray commentary from James L. Neibaur, there is some dispute as to how Lewis actually ended up in the role, though the perennially highbrowed Vidal probably experienced a certain amount of agita at Lewis’s presence and in particular the alterations to his original play which put the kibosh on the playwright’s anti-war sentiments and substitutes a series of comedic set-pieces for Lewis who plays Kreton, an infantile astronaut newly arrived from an undetermined planet far, far away. 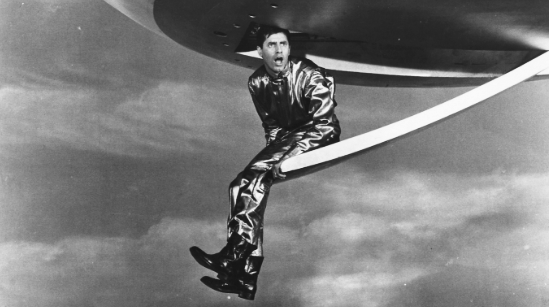 Once on earth Lewis trades in his shiny aluminum spacesuit for a confederate colonel’s outfit (he was hoping to catch a skirmish or two during the Civil War) but the movie doesn’t wander near any politically potent gags about Kreton’s fascination with our tragic war over slavery or, really, war in general. Though screenwriters Edmund Beloin and Henry Garson steer clear of Vidal’s polemics, some fairly queasy sex jokes remain (Kreton’s planet is populated by neutered killjoys), turning Lewis into the creepiest voyeur since Carl Boehm in Peeping Tom. 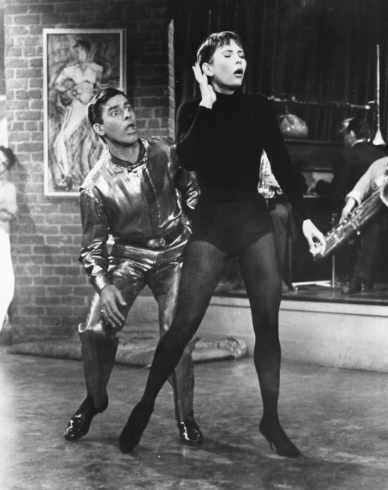 For a nicely-budgeted movie based on a television broadcast, most of the time it looks like it never left the boob tube; Lewis is surrounded by the likes of Fred Clark and Gale Gordon, terrific but one-note actors who, if not already staples of TV, would soon be heading there (though there is a Maltese Falcon reunion between Jerome Cowan and Lee Patrick as part of the dithering throng). It’s telling that the most memorable sequence is a loose-limbed dance with sultry beatnik Barbara Lawson backed by Buddy Rich.

Kino Lorber’s blu ray looks sharp as a tack though Loyal Griggs’ black and white cinematography is pretty uninspired, especially in contrast to his (literally) epic work in films like The Ten Commandments and the lush storybook hues of 1953’s Shane. Save for the aforementioned Mr. Heibaur’s commentary and a small selection of trailers, there are no extras.

You can order Shawn Levy’s  King of Comedy: The Life and Art of Jerry Lewis here.

And it would be remiss not to feature Martin Short’s ingenious SCTV parody, Jerry Lewis Live on the Champs Elysees. True to SCTV form, it’s a comic fever dream blurring Jerry’s French fans, the annual terrors of the Lewis telethon and Scorsese’s King of Comedy. It’ll make you feel good, a lot.