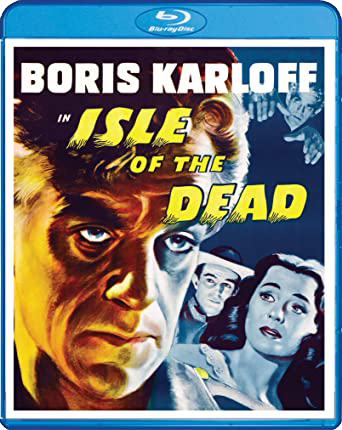 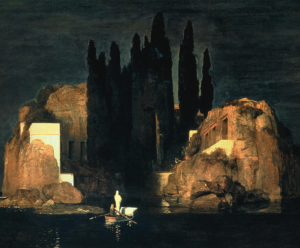 The Swiss symbolist Arnold Böcklin produced several versions of Isle of the Dead in the late 1800’s—none of them suggested a typical tourist attraction but more than a few artists used that gloomy seascape as a port of inspiration; Rachmaninov composed a symphony, Dalí produced a surrealist tribute, and Strindberg sketched the fragments of a play, Toten-Insel. There’s even a hint of the painting’s portentous cliffs in Welles’ Xanadu. In 1945, Val Lewton, Mr. Dark Shadows himself, conceived an entire film built around Böcklin’s haunted island. 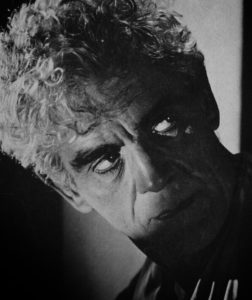 Directed by Mark Robson, Isle of the Dead is thematically rich, even for a Lewton project; set in Greece at the end of the Balkan wars, a plague joins forces with the supernatural to wreak havoc on a band of war-weary soldiers. A few of these men, along with a small company of expatriates and locals, find themselves trapped on a nearby peninsula, hemmed in by the pestilence sweeping the countryside. Like a line of unsteady dominoes, the characters tremble and fall, whether from contagion or at the hand of the Vorvolaka, an evil spirit disguised as one of the castaways. The film runs a scant 72 minutes and there’s not a moment free of despair—death rules and darkness prevails. To quote Bob Hope, “A good laugh would be worth a lot of money at this point.” 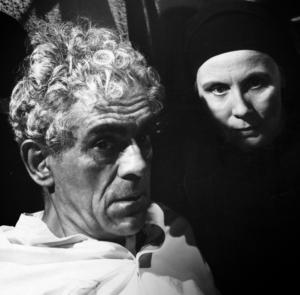 The script was written by Lewton cohort Ardel Wray who tapped out the screenplays for The Leopard Man, I Walked with a Zombie and, to confirm that we contain multitudes, the story for the jaunty comic-mystery, The Falcon and the Co-Eds. Wray focuses the story on Nikolas Pherides, a general played by Boris Karloff whose fealty to the rule of law has branded him the “watchdog.” Now he’s stranded with a crew of anxious civilians taking refuge in the home of Dr. Aubrecht, a brash archeologist responsible for despoiling the ancient graves that crowd the island. Like any battle-scarred Egyptologist could tell you, the scientist’s tomb-raiding will return to haunt them all. 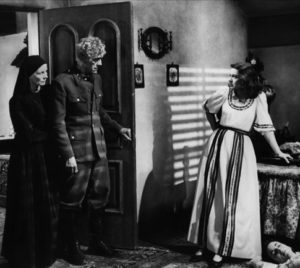 Divorced from his troops, Pherides’ autocratic ways become ever more pronounced, compelling the general to find an unlikely ally in Aubrecht’s housekeeper, Madame Kyra, a morbid fantasist who blames the plague on an ancient curse and is looking for a scapegoat. Karloff, who could suggest disaster with an arched eyebrow, and Helene Thimig, who plays the baleful Kyra, make for an unhappy alliance; the graying warrior past his prime and the woman in black who missed hers altogether. Like the puritanical alarmists in Dreyer’s Day of Wrath, the duo trains their sights on a desirable young woman, in this case a nursemaid played by Ellen Drew who tends an ailing matriarch with a penchant for cataleptic seizures. The place could use more nursemaids—the bodies continue to pile up and are buried one after another. One of them will return from the grave, not as a bloodthirsty devil but an avenging angel. 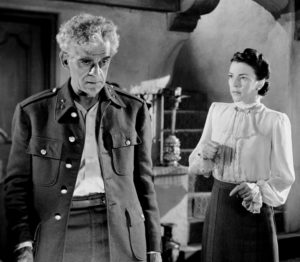 Though Isle of the Dead lacks the lyricism of other Lewton thrillers like Jacques Tourneur’s I Walked with a Zombie or Gunther Fritsch’s The Curse of the Cat People, Robson provides a bracing alternative with this macabre meditation on supernatural terrors versus earthbound horror. Appropriately located in the “cradle of Western civilization,” Isle of the Dead comes down on the side of reason, placing the apocalypse squarely at the feet of superstition. As a tragic figure tripped up by his own good intentions, Karloff looms above the rest of the cast (as was his wont) but Kathleen Emery as the fragile sleepwalker has a poignant and sometimes terrifying presence (her skewed beauty was just another piece of the peculiar puzzle that was 1953’s The Maze.)

Albert S. D’Agostino, one of RKO’s workaday production artists, would come alive when given substantial material (see his splendid work on The Curse of the Cat People and The Spiral Staircase)—his designs for the professor’s claustrophobic inn and the island’s windswept cemeteries are first rate. Leigh Harline, usually a happy-go-lucky composer (Disney’s Pinocchio, Lloyd Bacon’s breezy baseball fantasy It Happens Every Spring, and George Pal’s 7 Faces of Dr. Lao) makes good use of Rachmaninoff’s melancholy tone poem while cinematographer Jack MacKenzie puts the finishing touches on Lewton’s stark vision (MacKenzie was the definition of journeyman artist, behind the camera for everything from The Great Gildersleeve to episodes of The Abbott and Costello TV show). The results are shown off to beautiful effect in Warner Archives new Blu ray release.

Along with the exquisite transfer of MacKenzie’s work, the disc comes with the original theatrical trailer (subtitled in Spanish) and a new feature-length commentary by Dr. Steven Haberman, a knowledgeable film historian and occasional screenwriter for monster movie fan Mel Brooks (Dracula, Dead and Loving It, Life Stinks).