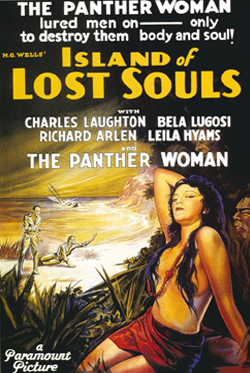 “They’re restless tonight,” mutters the insane Dr. Moreau about the vengeful natives on whom he’s been doing presciently Mengele-like experiments. Philip Wylie was one of the screenwriters who adapted H.G. Wells’ anti-vivisectionist screed, which was remade in 1977 and 1996, with uncredited ripoffs in 1959 (Terror is a Man) and 1973 (Twilight People). For a movie banned in many countries for years this has been a very influential film. Musical impressions ensued from bands Oingo Boingo, Devo, Van Halen and Manimals. One of the greatest and darkest of the early ’30s horror cycle.