Yasuzo Masumura amazes us with yet another sensual stunner. This period way-of-all-flesh tale is almost a horror film, but the supernatural shivers are far outpaced by the daily Evil that Men Do. Japanese superstar Ayako Wakao blazes across the screen as a self-decreed avenger of the female sex, who allows men to destroy themselves and uses them to destroy each other. The bloody killings orbit around the desire to possess the irresistible Spider Woman, an in an ‘annihilating noir.’ The screenplay is by the equally famous Kaneto Shindo, from a Japanese ‘amor fou’ novel by Junichiro Tanizaki. We’ve come to relish the venemous criticism in Yasuzo Masumura’s work, particularly his shows targeted at corporations and militarism. And then there is the strange expression of sexual frustration in Blind Beast, a movie that sounds more shocking than it really is. Until now the most disturbing Masumura work I’d seen was his Manji, a twisted psycho-sexual tale of domination and cruelty that would have us believe that weak-willed, covetous human beings are incapable of honest relationships.

Those stories mostly had contemporary settings. Although Masumura’s 1966 Irezumi takes place in an earlier Japanese period, its characters are no less conflicted by ‘impossible’ desires. The era’s economic oppression of women is so complete, that the film’s defiant leading character determines to use her sexuality to take charge of her life, and take revenge on male tyranny.

That premise isn’t unusual in crime stories, westerns and even big business tales about women rebels that buck the system. Masumura breaks with his 100% literal viewpoint to give this show a sensual and almost supernatural allure; instead of a breakneck pace, his very formalistic direction reaches for the beauty within images arranged for maximum visual clarity. Kazuo Miyagawa was celebrated for his B&W camerawork for Kurosawa and Mizoguchi; his color imagery here is nothing less than inspiring.

As is typical with a Masumura movie, Irezumi didn’t screen in America when new and in fact waited for decades to surface here. The story is adapted from a work by Junichiro Tanizaki, as was Manji. It was written early in the 20th century, as one of Tanizaki’s weird tales that interpreted women’s liberation — simple self-awareness — in terms of exaggerated ‘absurd eroticism.’ The screenplay is by Kaneto Shindo, the noted director of Children of Hiroshima, The Naked Island, Onibaba and Kuroneko.

Irezumi also stars Ayako Wakao, who the disc contributors refer to more than once as a Japanese superstar. She’s a powerful presence at the center of Masumura’s Manji and Red Angel; here she’s almost the whole show.

Penniless merchant apprentice Shinsuke (Akio Hasegawa) runs away with his boss’s daughter Otsuya (Ayako Wakao) at her insistence; she’s already enticed him to steal from her father. They hide on the houseboat of Gonji (Fujio Suga) and ask him to negotiate her father’s forgiveness. Gonji instead collects a fee from her father, claiming he’s searching for Otsuya. He then sells Otsuya to the Geisha master Tokubei (Asao Uchida of Tora! Tora! Tora!) for a big profit, and sets Shinsuke up to be murdered. The minor vice lord Tokubei grooms the beautiful Otsuya as a lure to fleece rich men. He renames her Somekichi and has the artist Serizawa (Kei Sato of Death by Hanging) tattoo a voracious she-spider on her back.

Otsuya has a masochistic response to the pain of the tattoo process, and takes on her new identity with a fervor that surprises even Tokubei. She’s soon the most desired woman in the district. Important men give her money in the vain hope that she’ll become their personal concubine. Shinsuke reappears, having killed his supposed assassin. Somekichi uses him to further her revenge against Gonji and even Tokubei. The whore-master wants to use his ‘spider woman’ to blackmail a rich samurai, Seikichi (Ga ku Yamamoto), but Otsuya / Somekichi has a plan of her own.

That synopsis makes Irezumi’s leading lady sound like a stock film noir femme fatale, like Lizabeth Scott in Too Late for Tears. But we sympathize with Otsuya’s violent rebellion. She rejects an arranged marriage that will make her some man’s property, and does whatever it takes to bust loose, no matter who gets hurt in the process. She knows full well how to leverage her allure. The docile Shinsuke is a useful tool in her scheme to become powerful and independent — something unheard-of in 19th century Japan. It’s a warped male fantasy of female liberation. 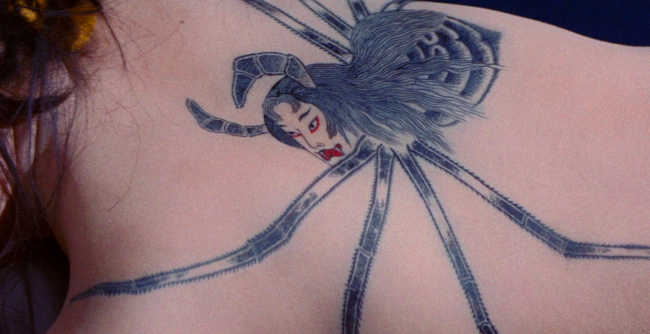 A perfectly good alternate title would be “Kiss of the Spider Woman.”

The central tattoo scenes have a fetishistic, quasi-supernatural feel. The decadent Tokubei is inspired by a painting of a killer female surrounded by the corpses of her victims. Otsuya’s perfect skin mesmerizes the tattooist Serizawa. He all but throws his tools away when he’s finished, having created an ultimate masterpiece. Serizawa instead shadows ‘Somekichi’ from the sidelines, witnessing the crimes of the female Frankenstein he’s helped to create. Otsuya becomes the man-killing spider in spirit, without benefit of an actual supernatural curse.

Other movie-centric comparisons come to mind: Otsuya / Somekichi is partly a victim, like the Polish girl lured into evil in Walerian Boroczyk’s frightening Story of Sin. But she’s also no innocent, which suggests the legendary Alraune, yet another male fantasy equating female allure with pure evil. Art is associated with death: the spider tattoo doesn’t function like The Picture of Dorian Gray but it does seem to energize Otsuya to pursue her murderous ambitions.

Masumura’s centers everything on Ayako Wakao, literally enshrining her in sumptuous images. The dialogue, at least as translated, doesn’t go in for a period feel — Otsuya impresses Tokubei by talking tough, like a Yakuza. Most everything Otsuya does is a performance calculated to deceive. We remain in her corner even as she manipulates Shinsuke, who all but asks to be abused: the kid is so spineless that he condemns himself as a murderer for what is a clear act of self-defense.

Otsuya’s man-killer potential becomes apparent when she takes a lazy stroll through a busy gambling den, unintimidated by ‘the enemy.’ Her lies and charades succeed with almost everyone. Her ruse fails with the Samurai Seikichi, yet he declares himself anyway — he’s excited by Otsuya’s criminal daring, her brash determination. But ceding control to any man is an impossibility for her.

Other Yasuzo Masumura films feature striking and disturbing visuals but Irezumi embraces formal, beautiful images. Kazuo Miyagaya’s lighting stresses chiaroscuro contrast, and is selective in its use of color. The many night scenes can be almost monochromatic, giving settings just enough color variation to emphasize depth. Wakao’s colorful kimonos stand out all the more vividly.

The compositions are arresting without coming off as decorative or affected. Masumura and Miyagawa break the frame into zones, leaving the characters in ‘boxes’ of their own. We’re often looking through doors or around corners that leave half the frame in darkness. The formalities are never rigid, even though camera movement is limited and some static shots go on for half a minute. The show has some of the best nighttime exteriors I’ve seen in color, filmed on a sound stage. We watch ambushes on pathways and over bridges through a bluish fog. This would be a terrific look for a remake of Strangler of the Swamp.

Those ambushes are plenty violent, and there are no fair fights. The Samurai all but plays with his sword, tormenting his victim with non-lethal cuts. Tokubei’s amateurish henchmen use shorter knives, and fumble their attacks. Shinsuke carves up one man by burying a knife in his chest and twisting it. When Otsuya / Somekichi gets involved everyone is left drenched in realistic gore. Shinsuke and Otsuya have already left the realm of human decency far behind — the only issue is how to dispose of the bodies.

I suppose one can say that Irezumi has a conventional resolution. The philosophical artist repents, acknowledging that he’s allowed a powerful female force to ‘get out of control’ and become a monster. Yet a part of us wants the crime spree of Ayako Wakao’s spider woman to continue indefinitely. Otsuya’s undeniable ‘life force’ makes her an honest viper in a society of hypocrites.

Arrow Video has done right with their Blu-ray of Irezumi — it’s been scanned in 4K, and this Hi Def presentation is immaculate, with vivid color. Shot after shot knocks us out for sheer graphic beauty; I wish I could see this on the giant screens of L.A.’s old Toho La Brea and Kokusai theaters. The arresting music score by Hikaru Hayashi combines new and old instruments. The tattooing scenes are accompanied by exaggerated noises for Serizawa’s pen-needle — when he jabs Otsuya’s flesh it sounds like he scraping bones.

Daisuke Miyao’s visual essay analyzes the film’s rich visuals. Mr. Desser looks for cinematic reasons why the film begins with a tattooing scene that belongs much later. We recognize it as a simple teaser, that assures the viewer that more sensational thrills are to come.