“Earth Given 24 Hours to Surrender!” Invisible murderous moon maniacs invade, with invisible troops and invisible flying saucers! John Agar, Jean Byron and John Carradine do their best to keep this underfed sci-fi turnip on its feet — and we diehard monster fans love it. It’s invisible entertainment! 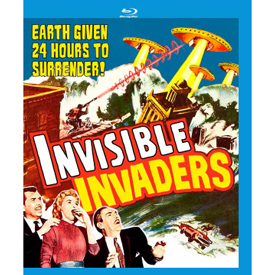 At the tail end of the ’50s monster boom the pickings became lean indeed. For every killer matinee winner like The Blob or The Fly, cheap double bills encouraged by American-International’s example became even cheaper.  Producers at Columbia, Allied Artists and United Artists turned out occasional turnips that had almost nothing to offer but a come-on title and a grossly deceptive poster.  After seeing the actual films, kids must have felt betrayed by the advertising for The Lost Missile or The Day the Sky Exploded.

Invisible Invaders is a Robert E. Kent production. Look at his filmography and you’ll find scores of genre titles from the second half of the fifties, some backed by producer Edward Small and mostly released through United Artists. Kent was sort of an in-house/outsourced producer whose B product filled out UA’s release slate. The films he made were all shot in B&W under conditions that would stymie a television director — no real locations, dull sets, and flat, perfunctory direction, often from the lightning-fast Edward L. Cahn. The haste with which these pictures were made can be seen in the fact that Cahn racked up fifteen directing credits in both 1959 and 1960. That’s an average of one feature every six-point-five weeks.

The story by Samuel L. Newman promises major Sci-fi action. Aliens that long ago conquered the Moon, now attempt to conquer Earth by inhabiting human corpses and overwhelming the living. The entire world is thrown into chaos almost overnight. A tiny group of researchers holes up in a hidden cave lab to perfect some method of combating the armies of the dead. Overcoming their interpersonal problems, the human defenders finally emerge with an effective ray gun that shoots ultra-high-frequency sound. Alien invasion! Armies of walking corpses! A futuristic lab under siege! I’m ready for that movie, right now.

Don’t expect those grandiose scenes to appear in Invisible Invaders. Producer Kent’s movie has precious little ‘movie’ — it’s packed with filler. Newman’s sketchy script uses ponderous radio narration to fill in 90% of the story, telling us about terrible attacks and slaughter happening elsewhere. Meanwhile, mismatched and crudely edited stock footage of natural disasters, airplane crashes, etc., fail to flesh out these cataclysmic events. When a dam explodes, as in a Republic serial, we recall the Daffy Duck cartoon where filmmaker Daffy pitches his next movie to studio head Porky Pig: “then the cattle stampede, and the dam breaks, and the volcano erupts!”

In between the filler is a series of so-bad-they’re-fascinating dramatic scenes. Hitting his career rock bottom prior to working for Larry Buchanan, top-billed John Agar plays a soldier assigned to keep the scientists secure. The resources that the Free World has allotted to preserve mankind’s only hope amount to exactly one jeep and one G.I.. Agar naturally falls in love with scientist Philip Tonge’s daughter. She’s played by the cute and personable Jean Byron, a favorite from vintage TV shows.

John Carradine and his echo-y voice make a brief early appearance as Dr. Carol Noymann, a dead scientist reanimated by the aliens for the illogical purpose of warning a colleague about the menace. As pointed out repeatedly in Tom Weaver’s astute audio commentary, the aliens’ invasion plan makes very little sense. Warning the scientists enables a research lab to be established even as the invasion is getting started. Carradine is always an arresting presence and his deep voice brings conviction to the most preposterous dialogue writers can cook up. But his function here is simply pointless. The resurrected Noymann is just the first in an uninterrupted stream of indigestible events.

The actual filming of Invisible Invaders is so threadbare, one gets the idea that director Cahn was given a six-day schedule, but decided to get the show in the can in half that time. The film contains only about thirty seconds of real action, all of it shot in Bronson Caverns. Characters don’t move unless they must, so most of the shots are static views of actors rooted in place to assure good focus. From the looks of the show, one doesn’t envision Cahn ever getting past take two. The actors are professionals under rigid instructions not to do anything that might blow a scene. To insure that all the dialogue cuts together, everyone keeps the dramatics at an even pitch. It’s a good example of filmmaking that emulates sleepwalking. Everything is smooth. Keep it up for slightly over an hour, and you’ve got a movie. 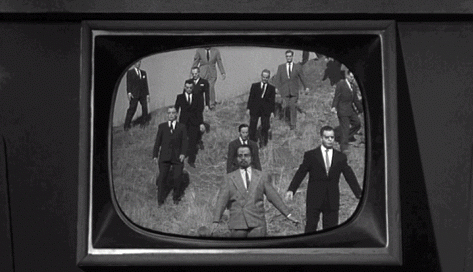 The economizing is evident in every frame of film. The invisible attackers preclude the need for special effects. None of the spectacle pictured on UA’s poster appears in the movie — no armada of flying saucers shooting death rays, no giant tidal waves. The crashing car is depicted with a repeat of the excellent car crash stunt from the previous year’s Thunder Road. The monster suit from It! The Terror from Beyond Space is used to provide a glimpse of an invader made visible by the researcher’s special ray. It’s painted white and double-exposed into the frame.

But the film’s one truly memorable visual is the odd sight of a dozen or so zombie automatons stumbling down a sagebrush hill. Dressed in burial clothes, with whitened faces and black eye sockets, they do have a certain cartoonish impact, at least the first time we see them. Cahn must have had the services of his cast of ten or so zombie actors for no more than half a day. Every time the narrator reminds us that mounting hordes of the dead are overwhelming the world, we cut back to the same angle of the same group of zombies, walking down the same hill, arms outstretched. Sometimes a spiral graphic is superimposed to lend visual contrast. By the end of the show, we’re really beginning to resent that superimposed spiral effect.

The incredibly cheap Invisible Invaders is the closest Hollywood came to making a backyard movie in the 1950s. Yet it has professional performances on soundstage sets, with hairdressers, prop men, etc. The optical bill can’t have been too low, considering how many shots have spiral superimpositions, or place stock shots into the TV monitors that the cast watches so glumly. These were experienced professionals trying to squeeze a watchable movie out of very little — every dollar not spent is a dollar the movie doesn’t have to earn back. Unlike some no-budget rip-offs, there’s nothing cynical about Invaders, although filming had to have its depressing moments for the actors and crew. When people join creatively to make something intended to have no merit beyond minimum commercial requirements, there isn’t much left to discuss. Hollywood zombies of the 1950s were few and far between: Creature with the Atom Brain, The Zombies of Mora Tau, perhaps a couple of others. Invisible Invaders does have a couple of zombie murders, featuring bloody corpses with gashed faces. Yet the scenes generate little excitement…. they barely make sense.

Eight years later George Romero improved mightily on this film’s basic idea for his game-changing Night of the Living Dead. Faithful fans of the genre were the only ones to notice a resemblance. There’s no comparison in impact, as Romero’s film really goes to town with his zombie concept. Living Dead emphasizes the notion that the dead coming back as zombies are our own relatives and neighbors, conjuring a full nightmare of universally-shared fears and taboos. Ed Cahn’s zombies are those same ten guys up on that hill, playing Frankenstein. “Okay, that was good, now go back up and walk back down one more time. And nobody smile!” 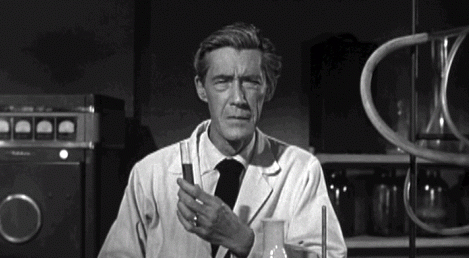 The KL Studio Classics Blu-ray of Invisible Invaders is an attractive encoding of this TV perennial. I remember it being shown constantly on Los Angeles television, but I don’t remember which station. With a running time of just over an hour there was room for a full 23 minutes of car commercials in a ninety-minute time slot. What did we do during all those commercials?

The correct widescreen framing helps to make Invisible Invaders look more like a ‘real movie.’ The graveyard scenes are filmed on a minimalist soundstage set with a blank backing just a few feet behind the actors. The 1:66 matting hides the emptiness top and bottom, minimizing the impression that the world suddenly ends behind the next bush. The stock shots are preposterous, in that they rarely suffice to illustrate the grandiose disasters and social upheavals described in the ‘voice of doom’ narration. There is the one incredible shot of a bomber plane slamming right into a hill… that always got us as kids. Another view of the Earth backed by boiling clouds is a real mystery image — for what was it originally filmed?

The draw for nostalgic adult fans will undoubtedly be Tom Weaver’s commentary. The movie is short enough that Tom can fill the running time with relevant comments, with only a slight assist from Dr. Robert J. Kiss, the go-to expert on where movies played back in the day, and what companion features they played with. If you saw this show in 1959, in a city of any size, the chances are that Kiss’s info can nail down the date within a few weeks. 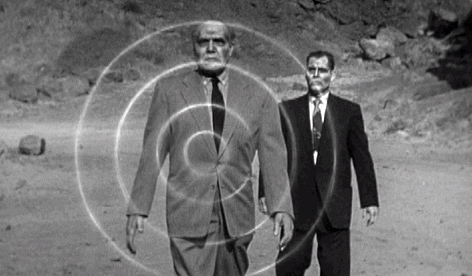 Mr. Weaver begins by telling us that Invisible Invaders really isn’t much of a movie. He usually finds more to be excited about, especially if a show stars at least one actor he likes. The Black Sleep is not a great picture, but its roster of horror greats definitely spins Weaver’s pinwheel. As he knows better than anybody, most of us monster fans are all-embracing dud-lovers. Purchasers that take the time to listen to these commentaries are pre-sold.

Weaver draws from his impressive history of archived interviews with the monster stars. His comments about their careers, aspirations and the movies they’d rather not have made are always perceptive. When it comes time to give the movie a severe (fun) grilling, he calls our attention to continuity errors and a set minimally redressed to serve as two separate interiors. Has Weaver been to Bronson Caverns?  Invisible Invaders seems to have camped out at that location. The production uses the Griffith Park quarry bare-bones and unaltered, as did Roger Corman in It Conquered the World. It looks the same in this movie as it does now, sixty years later.

Tom’s keen perceptions single out the scenario’s glaring gaps in logic. Yep, invisible monsters are a sure-fire way to economize with the effects budget. Weaver can see no practical advantage for the aliens to inhabit corpses in the first place. They’re just as solid when they’re invisible, and dropping their invisibility removes one of their only advantages. They’d have done better investing in earmuffs, to block that deadly audio weapon that the scientists eventually cook up.

We know who you are, Earthling monster fans. I personally find Invisible Invaders irresistible, if only to marvel at the filmmakers’ nerve. Did they laugh themselves silly at the cast & crew screening?  Would a movie like this even have a cast & crew screening? To paraphrase TCM’s current PR sloganeering, “Film is in my blood. Invisible Invaders is what I am.”  Yep, it’s important to embrace one’s heritage of greatness.