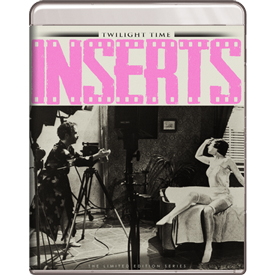 At least in Los Angeles, the theatrical showings of John Byrum’s remarkable Inserts came and went (cough) so fast that nobody had time to be outraged. The reviews made it sound like sordid trash that could only attract men in plastic raincoats. The ads looked sleazy. The actors not only talked dirty, the whole ambience was that of a stag film. It is listed as being released here in February of 1976, just when we keen film addicts were going gaga over the newly released Taxi Driver. It certainly wasn’t good date material. 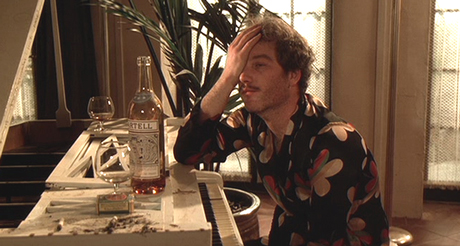 Writer-director John Byrum approaches Inserts as a standard Hollywood tale, but of the Hollywood one might find by turning over a wet rock. Washed-up movie director ‘Boy Wonder’ (Richard Dreyfuss) did well enough in the silents to buy a mansion, but he’s now both impotent and an alcoholic. He makes his living shooting porn for the former bootlegger ‘Big Mac’ (Bob Hoskins). Big Mac has two plans for success. He wants to produce real movies, and he has a dream of founding a chain of hamburger restaurants — not burger shacks, mind you — that will be everywhere. Boy Wonder’s present star Harlene (Veronica Cartwright) was once a name actress in silents but is now a totally gone nymphomaniac and heroin addict. Big Mac pays her in white powder. The male stud for the films goes by the nom de film ‘Rex, the Wonder Dog.’ A gravedigger in his day job, Rex is an idiot with greasy hair and an overdeveloped ego; he falls for every ‘producer’ who promises him a movie career. Big Mac crashes Boy Wonder’s rather extreme filming session. On his arm is Cathy Cake (Jessica Harper), a young woman eager ‘to see everything,’ and who will also do anything to get into movies. Boy Wonder is furious when Big Mac interrupts his porn shoot. Harlene runs off to shoot up and Rex loses also interest as soon as he’s been paid. Then something happens which almost guarantees that Boy Wonder’s film won’t be finished. It’s bad news for one actor, and a debut opportunity for another. 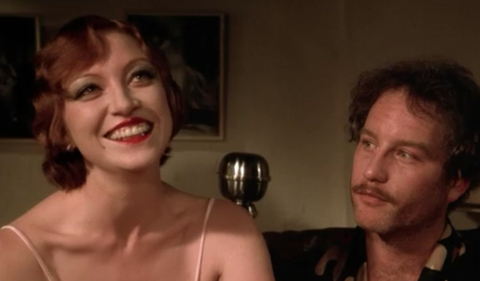 Inserts is written like a stage play; it all takes place on one set and spools out in real time. Byrum’s script is smart, inventive and as witty as smut-talk can get; nobody minces words, not for a minute. The eye-opening characterizations wash away the sentimentalized illusions of good-time girls and gigolos. Veronica Cartwright’s Harlene is a flashy slut on all levels, yet also a game gal with great affection for her director. Her banter with Boy Wonder tells us that they were once legit players. Even Cathy Cake talks about seeing Harlene’s big movies in Chicago. Ms. Cartwright takes up the challenge of playing this extreme material, and does wonders with it. Without being told, we imagine that Harlene’s screechy voice may have prevented her from crossing over into talkies. 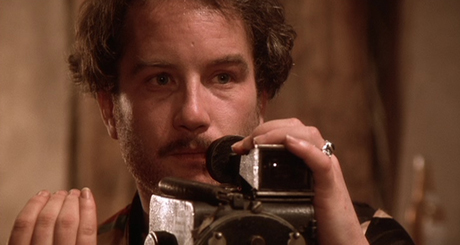 Big Mac finds it easy to manipulate Harlene with dope and Rex with money and promises. This is only Bob Hoskins’ first featured film appearance, and he’s sensational. He’s angered by Boy Wonder’s insolent attitude; the scary thing is that he’s the one who represents the future. Gangsters did dabble in films, and his vision of a Los Angeles blanketed with freeways and identical burger joints is the one that prevailed.

Inserts gets an A+ for insider inspiration, even though its chronology is all off. Reviewers assume that the year is 1932 or ’33, but most clues place the movie at least a few years earlier. Clark Gable is still a ‘nobody.’ The participants talk as if Wallace Reid’s passing is a fairly recent occurrence, but that happened back in 1923. Big Mac talks about freeway construction being underway just outside. Boy Wonder’s neighbors have all departed and the plumbing isn’t working; Rex is told to relieve himself in the pool. We can also hear the jackhammers working. Is this Whitley Heights? I guess they could be building the divided parkway that went through Cahuenga Pass, but even that wasn’t upgraded until 1940 (you can see it in W.C. Fields’ 1941 Never Give a Sucker an Even Break). 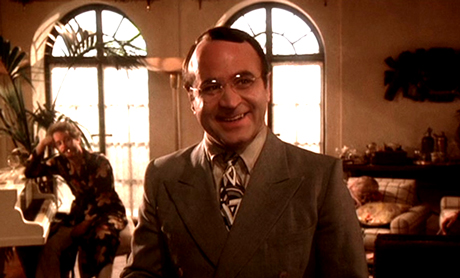 All these dates matter not, as the events of Inserts really exist in the realm of Hollywood myth. Inserts reminds me somewhat of Robert Aldrich’s grossly overcooked but highly enjoyable The Big Knife. Clifford Odets’ play also takes place mostly in one set. Byrum’s affectionate look at Hollywood degenerates is more convincing, especially when we compare Bob Hoskin’s venal producer to Rod Steiger’s Mussolini-like raving monster.

The unseen Clark Gable supposedly wants Boy Wonder to direct his next picture, which means that Boy Wonder must have made some ‘artistic’ silents before being kicked off the studio gravy train. We see him going half-nuts while filming, yanking the camera off the tripod (Big Mac considers this madness) and getting his actors so worked up that Rex really chokes Harlene. Boy Wonder won’t leave his house and seems reluctant to see anybody, as if fearful of his failure. He ends up being left alone with the deceptively ambitious and calculating Cathy Cake. Eager to ‘get into films,’ Cathy offers to film the graphic insert shots that might give Boy Wonder’s porn film a proper finish. Boy Wonder is impressed with Cathy’s willingness to go all the way, and also that she’s the only one who seems to appreciate his sly jokes. He sees a way to solve his problem with impotence as well. But who is using whom? 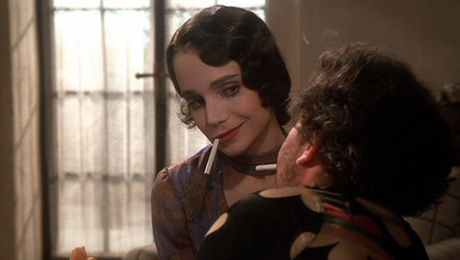 The show keeps us off balance at all times. Fans of Dreyfuss who think of him as a jolly shark hunter or a cutesy actor for Neil Simon will hardly believe that he made a movie like this. I must admit to being shocked/impressed that Veronica Cartwright would take this role on, and do so well. It makes us think about the whispered rumors of Joan Crawford’s undocumented years just prior to coming to MGM — just how true could those stories be? Jessica Harper’s filmography is stacked with extreme pictures. For ’70s actresses like Barbara Hershey, Candy Clark and Karen Black, roles with nudity and rough content were serious career builders. Inserts is surely off the list of ‘nice’ films, but for those not intimidated, it’s quite a find. It has genuine integrity.

The Twilight Time Blu-ray of Inserts is a stunning encoding of a film that was just unavailable. I had access to the MGM/UA library in the 1990s, and I don’t recall seeing any viewable transfers lying around. Denys Coop’s cinematography glows; it helps that Byrum’s deft direction helps us forget that we’re limited to a single interior. The film has no score, just some music that Boy Wonder plays on the piano. 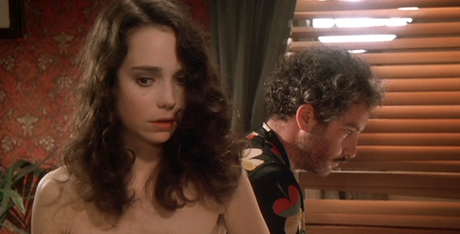 The disc has an Isolated Music & Effects Track and an original Theatrical Trailer. Julie Kirgo’s liner notes are a welcome source of information about this 100% certified maudit ’70s creation. Although it rarely generated any critical ink, its stars did well. We’re told that it may have been given a trial release only because Richard Dreyfuss had done so well in Jaws. Jessica Harper went on to a long line of noted roles, including two or three Woody Allen films and Dario Argento’s Suspiria. Veronica Cartwright has certainly been a favorite presence; her most noted films are horror fantasies but I’m partial to her amazingly good Betty Grissom in The Right Stuff. Bob Hoskins of course became a major favorite in a very short time, but I was never aware of his powerful start here.

Viewers looking for cheap thrills will be surprised by this smartly fashioned, witty comedy-drama. Hollywood-o-philes will also be charmed, as it’s right up there with the best of them. But prepare for some bigger surprises in the no-blinking raunch department. It’s Who’s Afraid of Virginia Woolf? crossed with a Tijuana Bible.

Note: This is one divisive, polarizing movie. I did find a couple of friends who saw it back in the 1970s, and neither had any kind words for it. This answer is from Dick Dinman who in the ’70s was a film booker for a large theater chain:

“Hey Glenn, Thanks for sending this typically insightful review. However:

To quote Roger Ebert’s review of a Rob Reiner fiasco: “I hate, h-a-t-e, HATE this film.” (And my lethal allergy to all things Dreyfuss doesn’t help.)

All I can confirm that is that we refused to play the film anywhere and even though we had a “relationship” with UA we refused to play it in either the Lido or the Fine Arts (Los Angeles Theaters) which specialized in off-beat “art” films. I believe that Pacific theaters picked it up for one week for one of their Hollywood Blvd. theaters (the World?) where it played to a deservedly empty house.

After watching this revoltingly nauseating endeavor I felt unclean and still do. — Cheers, D.D.

“Give me pictures that end with a kiss and black ink on the books.” — Harry Pebble”

DVD Savant doesn’t have a Fairness and Equal Time rule, but I’m always curious to see where my likes and dislikes do and don’t agree with others.