It’s a different Bogart — a character performance in a Nicholas Ray noir about distrust anxiety in romance. Gloria Grahame is the independent woman who must withhold her commitment… until a murder can be sorted out. Which will crack first, the murder case or the relationship? 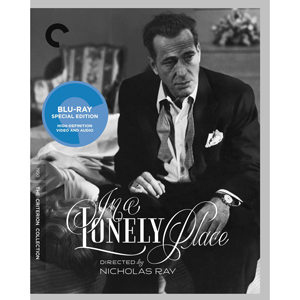 Which Humphrey Bogart do you like best? By 1950 he had his own production company, Santana, with a contract for release through Columbia pictures. One of his directors of choice was Nicholas Ray, who later said proudly, “i put Bogart in a movie without a gun in his hand.” When Billy Wilder turned his acid tongue loose at Bogie, he said, “You don’t like this picture? Maybe you should go back to a director you can push around, like Nick Ray.” A flop when it was released yet now considered one of the most sophisticated of films noir, this very dark tale of fear and suspicion is a keeper all the way. 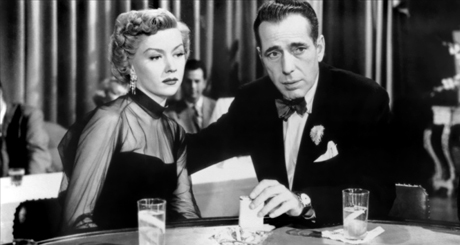 A painfully personal film from Nicholas Ray, In A Lonely Place is about the difficulty of holding a vulnerable relationship together under external pressure and internal suspicion. Humphrey Bogart’s emotionally volatile writer reveals more of the actor than we usually see: a cantankerous and stubborn man capable of great kindness, but who overreacts violently to boors and sensed disloyalty. Gloria Grahame is radiant as the cool but faithful neighbor who becomes his temporary muse, only to see her love ruined by fear and distrust. The whole enterprise is atypical for Hollywood of 1950, and especially for Bogart’s other, more formulaic productions for Columbia. Even in the quirky realm of film noir, this low key romantic tragedy stands apart for its quality and lack of commercial compromise.

Technically it’s an insider’s tale of the working life in Hollywood. Screenwriter Dixon Steele (Humphrey Bogart) becomes a suspect when a hatcheck girl is murdered after leaving his apartment. His refusal to enact a show of emotion raises the suspicions of the Beverly Hills Police. The main detective on the case, Brub Nicolai (Frank Lovejoy of Try and Get Me!) was once Dix Steele’s buddy in the army. Dix is initially overjoyed because the lovely neighbor who provides him with an alibi, Laurel Gray (Gloria Grahame), responds to his romantic overtures. He’s a demanding man and the cool, intelligent blonde appears to be a perfect match. But Dix’s background of petty brawls and his ongoing unstable streak frighten Laurel and make the cops more eager to trap him. He senses Laurel’s anxiety and turns paranoid; either the strain of the investigation is ruining their chances as a couple, or perhaps, as Laurel is beginning to fear, he really is a dangerous maniac. 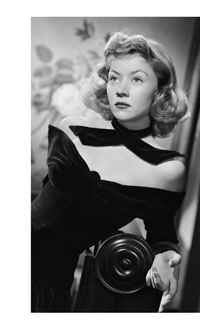 I was born when you kissed me,
I died when you left me,
I lived a few weeks while you loved me.Nicholas Ray was adept at putting together fascinating character studies with a social basis. His most famous is of course Rebel Without a Cause, but his real achievements are the smaller movies with bold themes — Bigger than Life, The Lusty Men, They Live by Night, On Dangerous Ground. Even awkward pictures like Wind Across the Everglades tend toward the unique, interesting end of filmmaking. A dull Nick Ray film is a rarity.

What really goes on in the shifting psychological space between a man and a woman in love? Dix Steele and Laurel Gray are complicated people that don’t react with perfect character consistency. Impulsive Laurel stretches the truth to the police, providing Dix with an alibi based on her sense that he’s no killer. She’s in search of a strong, creative man who can love her deeply. The chemistry they create together puts them both in traditional domestic roles, into ‘a place’ where they seem deeply happy. Their relationship wouldn’t pass muster in a modern drama that demanded PC gender equality, as Laurel immediately becomes Dix’s unpaid typist, housemaid, cook and personal assistant. But Laurel is no pillar of strength: the malicious advice of her jealous masseuse and the continuing suspicion of the police plants doubts that she can’t shake. Love can be fragile, vulnerable. What does Laurel really know about Dix?

Dixon Steele is one of Bogart’s most complicated characters. He’s a decent man but one with an prickly artistic temperament and a definite sense of superiority over others. Dix has a contrary habit of suppressing his feelings beneath a sometimes-unstable surface. He’s cordial to the slightly dense hatcheck girl, whose fate seems as unjust as that of the then still-sizzling Black Dahlia murder case. Dix likes to see people squirm, to see them off balance. He behaves as though the police investigation doesn’t affect him, and enjoys riling the cops with his lack of emotion and condescending put-downs. But the murder definitely does disturb the secret Dix inside, the one Dix himself does not know. The crisis brings his frustrated, violent nature fully to the surface. 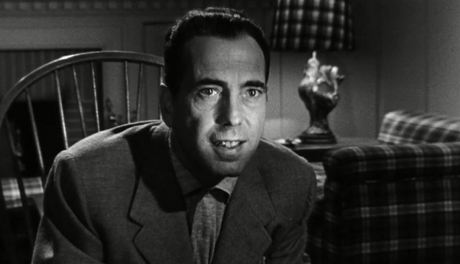 This is a fascinating addition to the Bogart gallery of characters. Dixon Steele is a man of integrity, but something about him is troubled and frustrated. He needs a nurturing, creative existence to counter his essential isolation and proclivity for violence. He doesn’t like the world much, as he shows by his willingness to brawl when provoked.

Yet Dix is also a genuine romantic. He appreciates Laurel and declares his love for her in no uncertain terms. He’s crazy about her, and there’s a period where they seem a match made in heaven. But the investigation he pretends to slough off affects him in other ways, bringing out resentment and paranoia. Theirs could have been a timeless love, but for bad timing and impossible pressures.

Refreshingly, the book adaptation by Edmund H. North
(The Day the Earth Stood Still) and Andrew Solt doesn’t use the murder investigation to represent the HUAC Witch hunts. Dix Steele is a suspect because of chance and the fact that he perversely invites suspicion. His army buddy Brub Nicolai doesn’t separate his official and personal roles, and a social invitation becomes a dishonest opportunity to probe Dix for signs of guilt. Dix’s enthusiastic replay of his version of the murder comes complete with breathless narration, telling Brub how to play the emotions of the killer. “He’s just an exciting guy,” is Brub’s defense. According to the disc extras, the original ending revealed Dix as guilty, a turn of events that would have robbed the story of its uniqueness: Dix would just be another psycho killer, repeating the final twist of an earlier, fumbled Bogie murder story, Curtis Bernhardt’s Conflict. 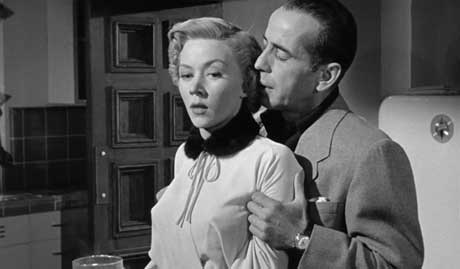 In place of a concluding twist, we get a revelation. Relationships are delicate animals that can be smothered by the wrong words, the wrong actions. Dix and Laurel are madly in love with one another, but that trust is destroyed when her terror and his rage go over the edge. It doesn’t matter that he’s innocent, or that they are both regret what happened. It can’t be taken back, and the romance is finished. Both will have to return to their personal ‘lonely places.’

Nicholas Ray doesn’t overwhelm his picture with expressionistic touches. Burnett Guffey was Columbia’s crime and mystery specialist of the ‘forties and ‘fifties, from My Name is Julia Ross to The Brothers Rico. When Bogart goes into his excited description of the murder Guffey hits him with a psychologically motivated Detour— like eye light. There’s a killer off-kilter composition showing Bogie and Gloria looking over their shoulders while seated at a bar, that Fritz Lang might have borrowed for Gloria and Lee Marvin in The Big Heat. Most of the film plays out in the romantic courtyard of a faux-Spanish Hollywood apartment copied from Ray’s first residence on Harper Avenue. There’s enough location shooting to evoke the hazy dawns in Beverly Hills, with the police station a recurring location. In a Lonely Place can boast a vivid Hollywood ambience, with Dix’s regular pals hanging out at Steven Geray’s watering hole. A buffoonish silent actor (Robert Warwick), an old-time director (Morris Ankrum) and Dix’s agent Mel (Art Smith) love his company. But Dix busts the place up from time to time, when he goes over the edge.

In a movie loaded with sensitive moments (for Billy Wilder to jeer at?), the most sensitive is perhaps a scene in the men’s room after Dix has struck his agent Mel. The ever-submissive Mel has reached the limit of his patience, and as part of his apology, Dix stands guiltily before him, exuding atonement and respect. It’s far more delicate and touching than a similar scene in The Big Knife. 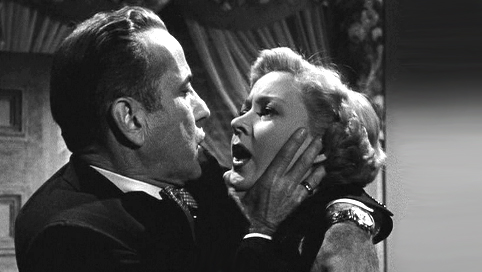 The Criterion Collection’s Blu-ray of In A Lonely Place is an exacting presentation of this polished Columbia show, that betters by far the already-good Sony DVD from 2003. Burnett Guffey’s dusty B&W cinematography is pushing classic noir into its second phase, where expressionistic devices intrude only for the most intense scenes. George Antheil’s music underscores the menace, and doesn’t overstate the romantic angles.

Criterion producer Curtis Tsui has created some good new extras. Dana Polan’s new audio commentary examines the film from a production and artistic standpoint. A slightly edited 1975 Nicholas Ray docu I’m a Stranger Here Myself shows the older Ray teaching in a film school, and recalling aspects of his movies. Gloria Grahame biographer Vincent Curcio attempts a career profile of the actress, touching on her many self-contradictions. Criterion has retained Sony’s 2002 Curtis Hanson piece on the movie, taped on the actual Harper Avenue courtyard that inspired the film set. The featurette a bit long on clips, and a deadly spoiler for anyone unfamiliar with the picture, but it gets the job done. Writer Andrew Solt makes an appearance as well, in archived interview material. The doc doesn’t dwell on the fiery relationship between Ray and his once-wife Grahame, but that story is certainly accessible online.