One’s awareness of modern avant-garde flamenco will get a boost from this exciting, impressive documentary about the progressive Spanish bailarina Rocío Molina, a fireball of a dancer whose powerful improvisations get our hearts beating faster. All the earmarks of traditional flamenco are there — grace, style and a fierce independent attitude — in a woman who loves what she does, and is not trying to push an art form to its next level. It’s pretty inspiring, even for an amateur fan like myself. Dance experts note, this is a film review. 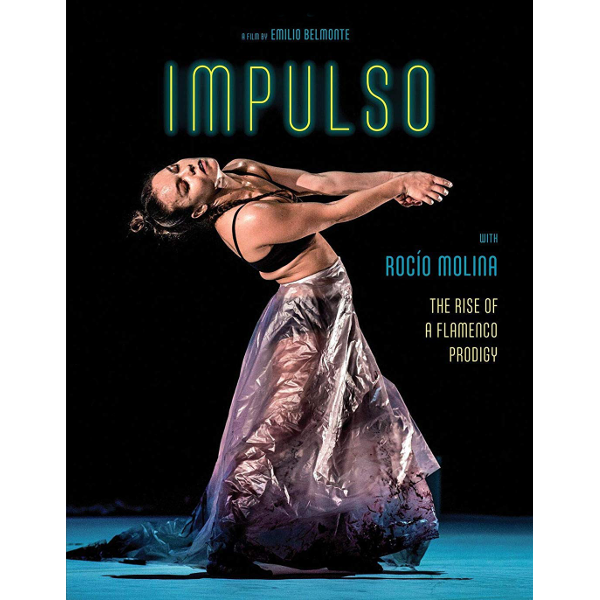 Flamenco dancing on film is sort of a hit-and-miss thing. I’ve seen two or three flamenco-related films by Carlos Saura that are terrific, starring Antonio Gades, Cristina Hoyos, and Laura del Sol, but casual viewers have just seen snippets of flamenco presented as musical numbers, usually in the 1960s. Serious flamenco can be too serious on film, and the dancers female and male as focused on their physical beauty as matadors — intense pride is part of the package. The performances aren’t about connecting with the audience in any lighthearted way, that’s for sure.

The documentary-performance film Impulso examines a present-day flamenco star, Rocío Molina, who is at this moment hugely popular. Molina both dances and choreographs; at the time the film was shot she was 32. She’s the first avant-garde flamenco artist I’ve seen that communicates something special. The commentary and voiceovers help greatly for an uninformed viewer like myself to understand what I’m seeing. Traditionalists may little use for Rocío Molina, but to see her in motion is electrifying.

Avant-garde flamenco may turn off people off that need to see tall thin women in flowery dresses, in a display evoking an earlier era. Molina says she’s interested in the core components of flamenco, and that she’s inspired by the old traditions. But she also takes in a lot more. There’s some truth to the fact that flamenco has moved beyond the classical — with the original gypsy culture thinned out, the traditional exhibition has become a floor show for cafe tourists. Molina and other fine artists tour in special venues. In Impulso she’s leading up to a big show premiere, held in the Theater de Chaillot near the Eiffel Tower in Paris. “Flamenco is rhythm,” is one of the earliest statements in the film, and almost before one has a chance to form an opinion on Rocío Molina, the raw rhythm of what she does grabs one’s attention. She doesn’t just clack her heels on the floor — every fierce tap is precise. Traditional flamenco is supposed to communicate attitude — pride, arrogance, sexual power. Molina does all those things without the show trimmings, without some of the feminine mystique associated with flamenco dancers. Actually, it’s just a different, less codified feminine mystique: woman as an elemental force.

Throughout the film we see bursts of performance in various locales all across Spain and France. She’s always dramatic and in control. She’s accompanied by a small band of singers and musicians — often but not always dancing to ‘Cante jondo’ — those wailing gypsy-like songs with an Arab feel. But parts of dances are without accompaniment. Unlike some artists, Rocío Molina articulates very clearly what her art is about. She calls her performances ‘impulsos.’ Many parts of her dancing are preplanned choreography, but the performances are plastic, and depend on bursts of inspiration — her accompanists rehearse to find new rhythms, but also to get in sync with her so they can follow the flow of the ‘impulsos.’ We can see this happening — she turns her entire body into a drum solo. It isn’t only footwork and artful hand and arm movements — she jumps and jerks and twitches, and sometimes integrates motions one might associate with hip-hop dancing. She also allows her legs to find poses other than traditional quote-unquote ‘graceful’ positions. Give a few seconds of attention, and one will be captured by her force of personality.

The show intersperses different performances in different venues with shots of Molina at rehearsals and at home, always surrounded by people. Voiceovers explain this or that aspect of her work. At home, we see her father make Paella in a wide skillet, on a barbecue. Her mother talks about her daughter’s obsession with flamenco from an early age, and expresses a fear she’s had about her daughter’s absolute obsession with flamenco, with rhythm, the ways she takes everything so seriously. It’s true, Rocío never seems to be just sitting still — she always seems happy, though, not stressed. We’re told that Rocío discovered dancing at a very early age and pursued it in all ways, never for fun. At the age of twelve her teachers realized that she was something special. Teachers normally weed out aspirants lacking the ‘approved’ height and body shape. Although Molina was shorter, wider and not slim, but the fact that she didn’t have the classic looks soon became irrelevant — she dazzled everyone.

We’re all accustomed to backstage coverage of all kinds of musicians and artists, where aides and hangers-on appear to be faking their support process and communicating a cooler-than-thou attitude. Not here — Rocío and her band of performers eat and laugh together. When the accompanists rehearse it’s like a special jam session, working out new rhythms to inspire and excite her. As for Molina herself, we don’t see much in the way of conflict, petulance, or dissatisfaction with the way things come together — she seems in harmony with what she does. Since everything is based on her personal performance, she has only herself to worry about. She appears to have what it takes to succeed — at one point she even says she’s not afraid because she’s young and strong. This positive attitude is there at all times, it seems sincere. The fierce, tortured facial expressions are reserved for the dancing.

The one-woman shows hold her audiences in rapt attention. She uses a variety of costumes, none really traditional but some having traditional parts. Others look extremely un-traditional. One section of one performance sees her wearing a long dress soaked with paint, and simply squirming and crawling across a white floor. It looks like a real performance-art thing, not a stunt just for the movie. Then again, if it’s part of a show, she’d need a break afterwards to clean up.

The post-traditional costumes and unconventional staging are not a revolution or a protest or a rejection — Molina is simply pulling in new ideas and developing her art.

The docu builds to a final big show, using titles reading “2 months away,” etc. When the show comes the performance begins with a mix of discordant music — her direct musicians on guitars, but also a few measures of screeching hard rock. Somewhat of a disappointment is that the docu still gives us the final show glimpsed in pieces no more than a minute long. Rather than let us concentrate, it is soon interrupted and fragmented with more cutaways to voiceover and extraneous visuals. But everything we see still grabs us.

Strangely, the highlight of the disc is a bow to the traditional, a sentimental gesture perhaps meant to assure traditionalists that Rocío Molina is not an upstart seeking to destroy old forms of flamenco. Part of the last show is a guest spot by an elderly dancer, one so old that she has difficulty walking. The fierce old woman calls Molina her granddaughter, apparently in the sense of generational art. The woman dances while sitting in a chair, as fiercely as she would standing; we wonder where she’s getting all the energy, or if she will live through the maximum exertion. Molina crouches a couple of steps away, dancing with her. It’s quite a spectacle. When the show is over, Molina’s main musical collaborator runs out for a hug, followed by a young woman who would seem to be a girl friend.

This is an important disc for the appreciation of avant-garde flamenco — until now, I haven’t seen much that I liked. When the show started I thought, ‘oh no, another one of those,’ a reaction that vanished within a couple of minutes. This artist is really special.

KimStim’s DVD of Impulso is a fine quality presentation, beautifully edited, if a little on the Euro-slick side of things. There are no extras. My only complaint is that I wish the disc were a Blu-ray, just for the added brightness and clarity. It looks fine the way it is.

I’ve said it before, but flamenco dancing has to be a prime potential subject for the new high frame rate cinema. No matter what one does, at 24fps and even at 30fps, the tapping becomes a blur and we only know what’s happening by how many taps we hear — as fast as fifteen per second. At 48 or 60 fps, now attainable on video, we’d get a real-life approximation. Back in 1978 when projecting proto- Showscan (70mm at 60fps) I excitedly told Douglas Trumbull that a close-up of flamenco feet would be a perfect subject for Showscan. I never understood what the disconnect was — he looked at me like I was talking utter nonsense.