Akira Kurosawa goes full tilt humanist with this emotionally wrenching, vastly insightful look at human nature. A faceless bureaucrat, alone and empty, is diagnosed with stomach cancer. He rebels and breaks down, but then finds a way to give meaning to his life even as he’s losing it. Kurosawa one-ups the Italian Neorealists by seeing hope and value even in the oblivion of the human condition. 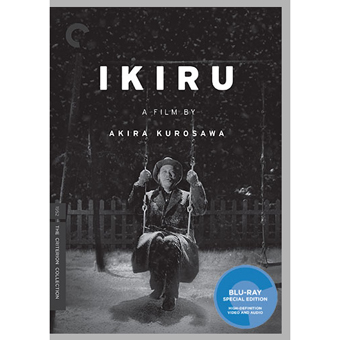 Criterion has made slow but steady progress upgrading its impressive Akira Kurosawa library from DVD to Blu-ray. The newest arrival in HD is his humanist classic from 1952. A film with the power to elicit strong emotions, Ikiru out-distances the Italian neorealist precedents in its portrait of a man’s relationship to society. Unlike De Sica’s despairing dirge Umberto D, another movie about old age and mortality, Kurosawa’s ending isn’t as relentlessly bleak, at least not in the bigger sense. Our destiny may be oblivion, but what we do in life can make a difference. 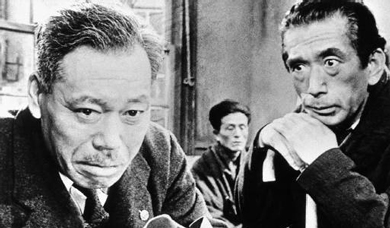 The mark of a great director may be the ability to fashion profound films from the simplest of subjects. Akira Kurosawa’s lengthy tale of a man dying of stomach cancer has nothing in common with American television ‘disease of the week’ movies. Witty and insightful, it moves quickly and keeps the attention with its unusual points of view and unsentimental approach. When it decides to go for an emotional ending, the effect is devastating.

Existentialism in the urban tangle?  Aged Kanji Watanabe (Takashi Shimura), an anonymous public servant, is described by the objective narrator as a colossal bore, a man who avoids life, a man who has never lived. Stomach cancer sends Watanabe into a swirl of confusion and remorse. His misery ends with a sudden inspiration. Kanji determines to undertake a major task, to push one small but significant project through the impassable mire of the Tokyo civil bureaucracy.

So formidable as the leader of Kurosawa’s Seven Samurai, Takashi Shimura is here a hobbled, terrified little man with few resources and less personal pride. Kanji’s philosophy in thirty years of public service has been to do as little as possible, stay invisible and retain one’s job. He fits in with the general run of men in his office, petty types concerned about little more than their present status and the infrequent opportunities for advancement — his workmates have no sooner guessed that Kanji is sick, and they immediately think about who might get his job. As is typical for Kurosawa, Watanabe becomes an outcast alienated from the rest of society, in this case by a terminal disease. The crisis of a life without meaning forces Watanabe to reevaluate himself. He becomes a small but significant hero: instead of surrendering meekly, he’ll go down fighting in the only way he knows, forcing a needed issue through the uncaring maze of city hall red tape. 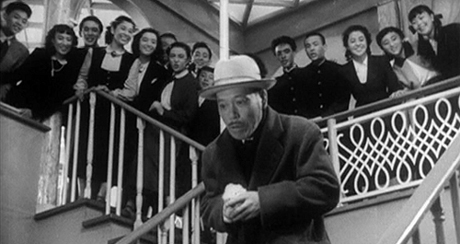 Kurosawa’s story is once again told in an unusual way. The callous, almost Dragnet-like narrator pegs Watanabe’s illness first, and his insignificance second. Compositional extremes express the claustrophobic limbo of the city records division where Watanabe works. The employees are divided and isolated by dark piles of paperwork that surely take years to pass through the system, if they’re not misplaced along the way. Wide-angle lenses and deep focus force Watanabe’s terror into our faces. Commentator Stephen Prince identifies the deep focus technique as one that Kurosawa would soon abandon.

At the halfway point Ikiru undergoes a major structural change. Watanabe exits the narrative, and his story is continued through Citizen Kane- like (or Rashomon– like?) testimony, which charts his accomplishment from various tangents. Kanji’s co-workers only slowly begin to realize the depth of the man’s selfless acts. The final image is a distilled ‘film blanc’ vision that links this world and the next. Instead of looking back on the world from a lofty afterlife, Watanabe observes his creation from above, on a bridge. He can cross the bridge to nowhere with the satisfaction that he’s done well. It’s Kurosawa’s version of the western statement, “All I want is to enter my house justified.”

Kurosawa again uses filmic technique more skillfully than many other great filmmakers, fashioning an ‘artistic statement’ that entertains and absorbs us. Life seems to explode into relief around Watanabe as he tries to drown his fear in teeming crowds and tawdry nightclubs. The chaos of life reminds us a bit of Rudolph Maté’s D.O.A (1949), which has a similar panic isolate a dying hero in the heart of a very living city. Compared to the pictorial approaches of many another Japanese director, Kurosawa’s visual dynamism seems more American. Yet his camera moves and compositional shifts aren’t there to propel a genre story, but to suggest basic human vitality. He has us in his pocket all the way through. 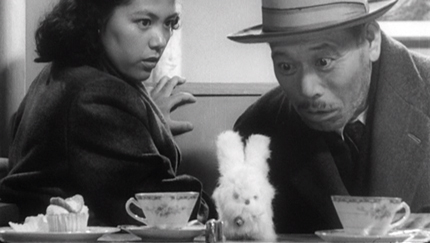 As Mr. Prince points out, Kurosawa changes a detail in his lighting scheme at a key moment. In the first part of his ordeal, Watanabe’s eyes are dull and dark, and often averted from our view. When a moment of inspiration reveals the path he will take, the cameraman adds eye-lights, little reflections that bring Watanabe’s face to life. Our bureaucratic hero spends the rest of the time he has left with his eyes wide open, bravely defying his fate with meaningful action. This individualist action runs counter to standard Japanese storytelling that more often than not champions communal goals and identification with a national consensus. Watanabe is alone and he solves his ‘life problem’ on his own. He seeks no one’s approval.

Watanabe’s existential bargain is also different than that found in typical Western stories of this kind, where we’re taught that ‘the struggle is its own reward,’ and that failure is not defeat if one is ‘putting up the good fight’ — the old, ‘even if we fail, we still win for trying’ argument. For Watanabe there is no possibility of compromise. Only positive results will suffice, and from the moment he figures out what he needs to do, he’s on a race that must be won. Effort alone won’t do.

At one point Kurosawa eventually fixates on a powerful, simple image, the kind that gathers all the meaning of a film into one clear picture. The old man is a child, when it comes to facing the unknown. The motif of a children’s nursery song returns as well, making a powerful statement. When the lights come up, Ikiru makes many viewers feel like changed people. 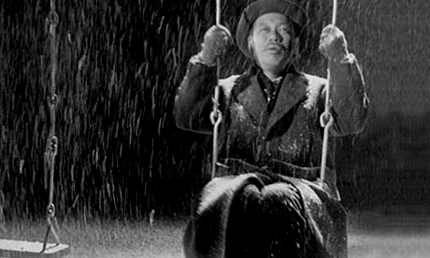 The Criterion Collection’s Blu-ray of Ikiru is a new 4K digital transfer. The 2003 DVD showed its age, with the presentation affected by plenty of nicks, scratches and other image flaws, density pulsing, etc.. This new disc cleans up quite a bit of this, particularly the uneven density. But there are still plenty of digs and minor flaws. The many optical transitions — fades, wipes and dissolves — are done so crudely that there actually hasn’t been much of an attempt to smooth them out. The film stock changes radically and the size of the image shifts across the splices, and original prints probably had the same flaws. All that said, the added contrast, sharpness and stability make the image much more attractive than the DVD.

The audio is uncompressed. Although the fidelity is limited, we’re impressed by the detail in the sound design. American movies of 1952 put all the dialogue up front, added a bare minimum of sound effects and layered on the music like plaster, to cover all defects. The Ikiru track is a subjective experience. Ambient city noises dominate except for certain scenes, when a song or a single voice takes center stage. It’s a sophisticated track, not an assembly line job.

The original DVD came about just as the Criterion was lining up quality key-source extras for its Kurosawa films. Repeated from the 2003 release is Stephen Prince’s authoritative commentary, which nails the historical and personal stories inside Ikiru. Prince points out many less than obvious visual schemes that add wicked social commentary about the bureaucratic jungle in Tokyo. Also repeated are a forty minute Japanese TV docu on Ikiru and a ninety minute docu on the director’s films and working methods. Both are excellent shows with plenty of behind the scenes stills and footage, plus interviews with Kurosawa and his actors. Mr. Shimura and two of the actresses from Ikiru, interviewed 40 years later, have a lot to say about their roles and their director.

A trailer is included, as well as an insert flyer with an essay by Pico Iyer and a reprint from a book by Donald Richie.

Criterion has brought out many good Kurosawa Blu-rays with still more to come. Fans are eager for the chilling ‘business noir’ The Bad Sleep Well and the humanist ‘bookend’ to Ikiru, 1965’s Red Beard.