Gotta love that title!  Producer Walter Mirisch’s small-scale Monogram noir was once assumed lost, but now it’s making its home video debut on Blu-ray. A luckless young entertainer finds himself neck deep in murder trouble, when an unbreakable string of circumstantial evidence points directly at him. As the date of his execution nears, the only way his desperate wife can help him is to encourage the detective on the case to think he has a chance with her. Taken from a Cornell Woolrich story, the show tries hard despite its low budget — we can almost feel Mirisch behind the scenes, making sure the picture has heart and sincerity. Producer Walter Mirisch’s first solo effort for the humble Monogram Pictures was Fall Guy, from a Cornell Woolrich story about amnesia. The threadbare ‘No Star’ attraction could claim ambitions a bit higher than typical Monogram fare. Before Mirisch settled into his successful ‘Bomba the Jungle Boy’ series he produced a follow-up murder thriller based on another Woolrich tale.

How does the saying go? — ‘I wouldn’t be in your shoes for the world?’ ‘I wouldn’t be in your shoes for all the tea in China?’  The main title card for I Wouldn’t Be in Your Shoes depicts a pair of tap shoes hanging from a noose, in silhouette. An unlikely chain of events sees poor Tom Quinn (Don Castle) railroaded for murder. He’s an unemployed dancer, and prints of his special shoes are found below his apartment window near where an old miser has been murdered. The whole neighborhood knew that the victim had $80,000 in obsolete oversized bills hidden in his shack; Tom finds a billfold with $2,000 on the street the very same day. His wife and dancing partner Ann (Elyse Knox) can’t wait to spend the money, and the moment they do the law closes in with a murder charge. Making the arrest worse is the fact that one of the arresting detectives, Clint Judd (Regis Toomey) is a regular customer at the dancing academy where Ann works to make ends meet. Judd’s been slipping her $5.00 tips hoping to stir her romantic interest. Ann has a touch of pragmatic opportunism: she hasn’t said that she’s married, so as to keep the extra money coming. 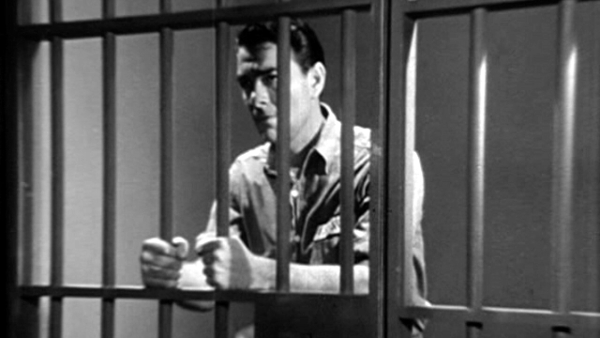 I Wouldn’t begins very much like Edgar Ulmer’s poverty row noir overachiever Detour, but without that classic’s artistic edge. Tom narrates his tale of woe from a cell on Death Row, surrounded by his fellow condemned prisoners, including a soulful Bill Walker and a sad John Doucette. We even hear a music cue associated with Detour, indicating that producer Mirisch had that feature in mind. Unlike Detour’s self-pitying protagonist, Tom remains positive-minded with Ann even up to the day of his scheduled execution.

The Detour similarities end there, and elements from other recent noirs seem to take over. Ann goes to extraordinary lengths to save the man she loves, as did the heroine of Robert Siodmak’s Phantom Lady. Detective Judd’s involvement with Ann and his attention to her husband’s case is reminiscent of Otto Preminger’s Fallen Angel. And when a possible new suspect for the murder comes to light, we get a tiny foretaste of Alfred Hitcock’s later The Wrong Man, The suspect looks a little like our falsely condemned hero — is this also a case of mistaken identity?

I Wouldn’t benefits from sincere performances even if it is let down somewhat by direction dictated by what was clearly a tiny budget. Director William Nigh uses a minimum of camera angles, barely covering the dramatic scenes; the good actors sometimes seem a little under-rehearsed. Some scenes have a ‘one take and one take only’ quality. Yet the important intimate scenes play well, as with Elyse Knox’s prison visit with Don Castle, and the close-up encounters between Elyse Knox and Regis Toomey at the scene of the crime. 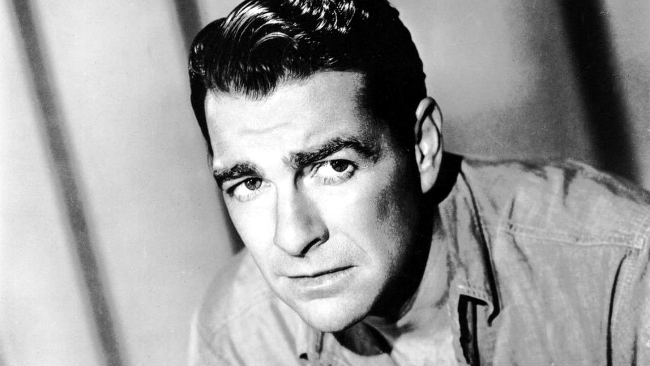 The overall haste is most apparent in a montage scene that represents Tom’s open & shut murder trial. The soundtrack tries for an expressionist feel, with words being repeated and echoed — but the visuals are flat and dull. The script might have suggested a variation on the trial scene in the highly stylized Stranger on the Third Floor, perhaps with weird sets and distorted angles. But all that RKO artcraft took extra money and extra time, resources denied director Nigh. I Wouldn’t has only its actors’ immediate impressions to carry the day.

I Wouldn’t focuses on a married pair of professional dancers yet we never see them dancing together. Only the shoes remind us of this, but it would seem that any producer with an extra dime to spend would have some representation of the entertainers’ career, if only a club playbill on the wall or a photo of them posing on a dance floor. It’s very possible than neither actor could dance worth beans… but why couldn’t Tom Quinn, alone in his Death Row cell, have a dream recollection visualized by a long shot of a dancing couple under a spotlight — any couple. Again, the budget surely mandated that I Wouldn’t could afford no such frills.

Our pleasant leading players are Hollywood also-rans, capable players that didn’t get the breaks. (↑)  Handsome Don Castle has a likeable face and a warm manner, but War service interrupted his start, and whatever interest the studios had in him dissipated on his return. But that wasn’t the end for Don in Show Biz. He later ran a TV company for Bonita Granville and Jack Wrather, and produced episodes of TV’s Lassie.

The beautiful Elyse Knox sometimes reminds us of the young Janet Leigh. She’s probably now best known as the mother of actor Mark Harmon, although horror fans fondly remember her starring appearance in Universal’s The Mummy’s Tomb. Knox keeps Ann Quinn on task, maintaining a grim desperation. This isn’t easy, with the somewhat inconsistent character writing. In one scene Ann seems to have given up, but in the next she’s ready to surrender her virtue in the hope that Clint Judd can be motivated to re-investigate the case. 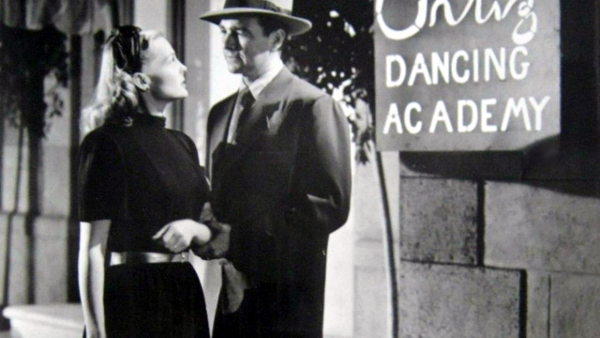 The real star performance here is that of Regis Toomey, who entered films when sound came in and played a variety of character types, even leading men, for big directors and opposite bigger stars. An excellent example is William Wellman’s Other Men’s Women, where he performs with Mary Astor. Way before WW2 Toomey had settled into featured support roles, yet was always a standout.

Toomey’s detective Judd is no longer a romantic magnet. He admits to being quietly obsessed with the younger woman — very much like Charles Bickford’s detective in Fallen Angel, whose name is also Judd. Toomey’s committed performance really helps — in subtle ways, he holds attention whenever he’s on screen. It’s Toomey in the top image posing with the hangman’s noose: this man has tortured eyes. They’re Elisha Cook Jr. Eyes, although I’m not volunteering to write a song about them.

Several notices put an emphasis on Ann’s supposed duplicity, implying that her mildly greedy behavior gives her at least some responsibility for everything that has happened. She accepted Judd’s tips, knowing he was sweet on her, and didn’t say she was married. Almost like a heroine appealing to a despot in a dime novel, she offers herself to Judd if he’ll just find a way to save her husband from the electric chair. The actors take control of these scenes. (↓)   Judd says he’d never hold her to such a promise, but we can tell that it gives him new hope. 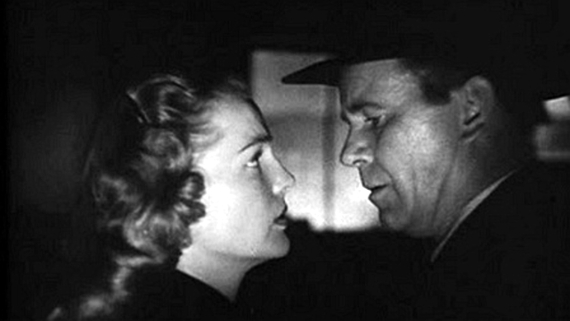 In a low-budget situation where the director serves mostly as a traffic cop and the movie depends so much on preplanning, the producer is more of an auteur than ever. Walter Mirisch enlisted the capable writer Steve Fisher, who had five solid noir credits to his name. Fall Guy had suffered from a lack of believable characters, so perhaps Mirisch tried harder to humanize the players this time. Clint Judd tries and fails to get his boss (Charles Brown) to re-open the case, while the boss is setting up his family’s Christmas tree. We care more for the somewhat colorless Tom Quinn because two shop owners clearly like him a lot — Italian-American Tito Vuolo and Jewish candy store proprietress Esther Michelson. We realize that Mirisch didn’t have any official creative input in his later Billy Wilder films, yet a couple of these scenes remind us of moments in The Apartment, especially Esther Michelson’s sweet ethnic fussing over Tom’s candy habit.

Don’t get the wrong idea — I Wouldn’t Be in Your Shoes is a minor noir, yet of potential high interest to noir fans of poverty row gems like Detour, or Decoy. Although all the ad art features a big exclamation point in the title, the film’s actual main title card goes without. The eccentric title is a grabber, although there are a few noirs that can top it. The winner may be the overtly sado-masochistic Kiss the Blood Off My Hands. 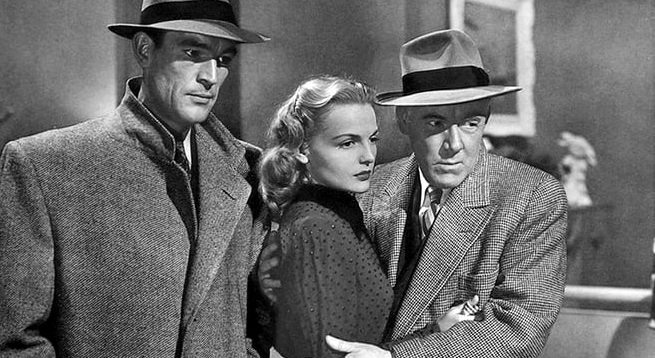 The Warner Archive Collection Blu-ray of I Wouldn’t Be in Your Shoes is a sparkling, handsome HD rendition of this Monogram quickie. In 1948 every studio was angling for more traction in a theatrical market that would soon be shrinking because of television. The excellent transfer (reportedly from a single print found in an archive) shows no flaws. The stock music conglomeration track assembled by Edward Kay plays quite well.

Warners adds a couple of extras, something it doesn’t normally do unless items are already cleared for a previous DVD release. The Symphony Murder Mystery from 1931 is a vintage whodunnit short subject, with performances by a very young Donald Meek, John Hamilton and Douglass Dumbrille; it’s an amusing curio. Holiday for Shoestrings is a Technicolor Isadore Freleng Merrie Melodies cartoon about a Christmas concert. It may have been included because a new remaster was available. We note that the animation backgrounds are credited to artist Paul Julian, of later U.P.A. gems and Roger Corman art titles.

I Wouldn’t Be in Your Shoes may amount to no great shakes in the larger noir firmament, yet it shows the creativity and tenacity of producer Walter Mirisch. His efforts helped keep Monogram afloat and aided greatly in transforming it into a more prestigious entity under the name Allied Artists. Mirisch’s ‘Bomba’ movies helped the studio pay its bills, the same as did their down-market Bowery Boys franchise. But Mirisch experimented with several genres — westerns, science fiction, war movies — and experimented with two-color processes so features like AA’s Flat Top could charge higher rentals. He even put together a horror film in 3-D.

Mirisch helped bring producer Walter Wanger to Allied Artists, which paid off with up-market hits like Riot in Cell Block 11 and Invasion of the Body Snatchers… which led to big budget experiments like Friendly Persuasion …. which led to Walter and his brothers forming their own company. Mirisch Productions became the individual most successful Hollywood producing entity of the 1960s, providing financing and counsel to filmmakers John Sturges, Billy Wilder, Blake Edwards, Robert Wise, David Swift and Norman Jewison. Along the way Walter directly produced his own Best Picture Oscar winner In the Heat of the Night. I don’t know of any producer who started in Poverty Row, who did as well later on.