Yes, it is a perfect title for a horror picture, but it belongs to an early film noir — or as we discover, a murder thriller that previews the classic ’40s noir visual look. Victor Mature is the man on the spot for a killing, Betty Grable and Carole Landis are a pair of sisters in danger, and Laird Cregar is the creepiest police detective in the history of the force. 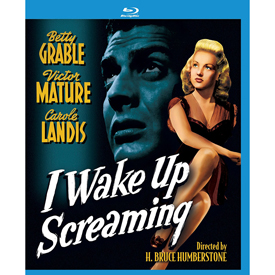 My, what a difference a good HD scan makes to a classy film noir with distinctive B&W cinematography. 1941’s I Wake Up Screaming isn’t the greatest of movies, but it is distinguished as one of the first noirs that consistently uses ‘noir’ lighting arrangements that would become the norm two or three years later. The other noirs around I Wake Up Screaming just weren’t as visually stylized: The Glass Key, Johnny Eager, The Maltese Falcon. The Fritz Lang films of the ’30s had a more extreme Germanic look, as did RKO’s weird and wonderful Stranger on the Third Floor from 1940.

What I Wake Up Screaming doesn’t have is a strong noir sensibility. Yes, there’s a strange mystery and a cop obsessed with the memory of a dead beauty, as in Laura from several years later. But the obsession here is almost a gimmick, and much of the story plays like a misplaced light comedy from the late ’30s… albeit with strange overtones. 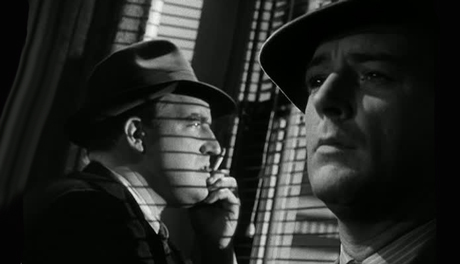 Police Inspector Ed Cornell (Laird Cregar) is convinced that New York promoter Frankie Christopher (Victor Mature) murdered Vicky Lynn (Carole Landis), a beauty he had transformed from a waitress into a society model and celebrity. Convinced that he’s being framed, Frankie gravitates toward Vicky’s sister Jill (Betty Grable). Other suspects emerge, but even Jill believes that Frankie could be the killer.

I Wake Up Screaming is stylish, but not particularly subtle. Characters arrive and immediately begin relating lengthy flashbacks, visualized accounts that are almost laughably tidy. One witness finishes his story of what happened on a particular night. The cops then stroll over to a second witness, whose account just happens to pick up exactly where the previous one ended. The flashbacks are so complete that an editor could easily reassemble them back in chronological order.

The writers toss in a number of interesting gimmicks. The cops unnerve two of Vicky Lynn’s boyfriends by playing back her Hollywood screen test after she’s been murdered, creating a cinematic “return from the grave” almost identical to that by Louise Brooks in the creepy ending of the early French talkie Prix de beauté. Writers Dwight Taylor and Steve Fisher wrote or contributed to the screenplays of later noirs : Conflict, Roadblock, Dead Reckoning, The City that Never Sleeps, Pickup on South Street. 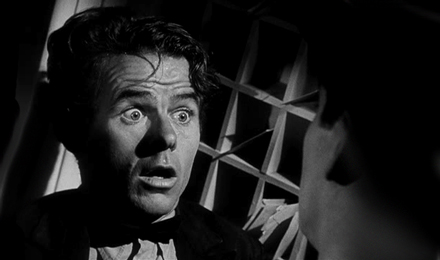 Betty Grable’s presence is all about cheerful glamour, which by itself is not conducive to a noir mood. She glides through scenes with perfect, I mean perfect hair (count the comb lines on her temples) and remains a pastry bon-bon no matter what happens to her. The reason I Wake Up Screaming isn’t a strong noir is that no noir theme is allowed to take hold. Betty’s Jill interacts with a strange selection of men. Victor Mature is a double-talking bon vivant promoter who lacks a convincing alibi for Vicky’s murder. Elisha Cook Jr.’s desk clerk Harry Williams is even creepier than usual. He takes it upon himself to enter the dead woman’s apartment and ‘gather her things together.’ It’s too bad the Production Code wouldn’t allow Cook to be seen fondling Vicky’s ‘things.’ Or maybe it isn’t.

Laird Cregar plays an overbearing tub of a cop with a permanent sneer. Unlike more conventionally heroic detectives, Cregar’s Inspector Cornell doesn’t believe anybody’s alibi and uses underhanded means at all times. He barges into Grable’s apartment with a sexually intimidating manner (still a creepy scene) and then simply shows up in Mature’s bedroom in the middle of the night, without excuses. Every noir critic who ever wrote about I Wake Up Screaming makes special note of the implied homoerotic subtext. 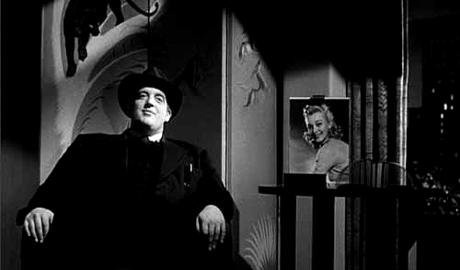 By the way, Laird Cregar must have been a HUGE man. Victor Mature is no midget, but Cregar’s head looks to be twice as big. With eyes spaced so far apart, Cregar must have had terrific 3-D vision!

If all of the above gives you the idea that I Wake Up Screaming is a core noir exemplar, it’s unintentional. Much of the movie plays like a sour late ’30s comedy. The basic idea of promoting a saucy waitress into a top NY chick celeb is made for a screwball farce, at least until the plan turns sour. Allan Joslyn and Alan Mowbray are an unprincipled columnist and a ham actor respectively; they dish up a lot of borderline smutty remarks and, if you listen closely, sneaky anatomical references. We can tell that Fox tried to steer the film toward a much lighter tone, because a deleted scene has Grable singing to a record in a music store, as might Ethel Merman. The original title was Hot Spot which indeed sounds much more like a musical than a thriller. 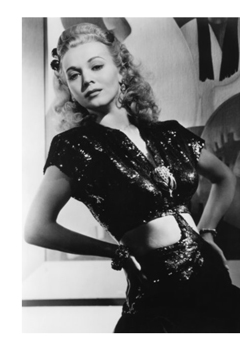 Speaking of music, the film’s score has not dated well. The basic cue is “Street Scene,” the Alfred Newman standard heard in a string of Fox noirs as either a signature theme or an economy measure. It is used repeatedly here, most jarringly when its opening notes are heard, like a klaxon horn, to signal the start of all but one of the flashbacks. It’s almost as wince-inducing as the crazy electronic noise that accompanies any mention of a particular Indian in Major Dundee.

But that’s not all. The “Street Scene” theme shares equal track space with, of all things, “Over the Rainbow” from The Wizard of Oz. We’ve heard that the Judy Garland musical wasn’t an instant classic but one would think that tune was firmly associated with Dorothy Gale. Officially the theme for Betty Grable’s Jill, it ends up being played at the strangest moments, as when Laird Cregar’s unhinged detective is waxing melancholic.

The KL Studio Classics Blu-ray of I Wake Up Screaming is very attractive. Kino is having a fine time issuing Blu-rays of Fox Noir classics now improved with HD transfers. The B&W images are velvety-smooth for most scenes, not counting some streaking in the titles and what look like splice bumps here and there. Victor Mature seems a natural for posing in the shadowy corners of staircases. Betty Grable’s silvery hair must have been the envy of every teenaged girl in America. She gets more glamour attention than does starlet Carole Landis (right).

The packaging lists all the extras from the old (2006) DVD, but a couple of them do not appear: Grable’s deleted ‘Daddy’ singing scene, and an alternate ‘Hot Spot’ title sequence. (I clawed over the menus without success; somebody please correct me if they are there and I couldn’t access them.) We are given a gallery of artwork for the first, aborted ‘Hot Spot’ release. Trailers appear for this movie, He Ran All the Way, Daisy Kenyon, Boomerang and 99 River Street but some are textless transfers.

Eddie Muller’s commentary has been carried over from the old disc. One of his lighter efforts, it nevertheless contains plenty of solid information and a sharp overall analysis. Muller really likes seeing his favorite bit players show up. He stops the presses to point out a wild dialogue line, when columnist Allyn Joslyn phones in a scoop with the words, “Hold that story about the Jap spy with the Kodak, I got something better for you!” As the movie was filmed in August of 1941, those word predate Pearl Harbor and are therefore uncannily prescient — maybe. 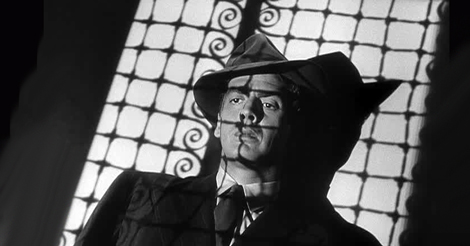 Having that strong of an anti-Japanese reference in there before the start of hostilities would seem highly unlikely. The film was previewed on October 16 as Hot Spot but not released as I Wake Up Screaming until January 16 of 1942. I’d like to advance the theory that when the movie’s title was changed, Fox reshot the scene to accommodate the topical replacement dialogue line. It’s possible that (a big fat guess here) the original dialogue line had been made obsolete by the Pearl Harbor attack. A rush change just before Christmas would still make a mid-January release date. Perhaps Fox’s lab was working overtime as the infamous L.A. ‘Air Raid’ took place, the one that inspired Steven Spielberg’s 1941.

Then again, it’s even more possible that Mr. Muller knows the inside story – the line could be from the shooting script. His word on all things noir is nigh unimpeachable.