She’s beautiful, desired and enjoys a social mobility in the improving Italian economy… but she’s also a pawn of cruel materialist values. Stefania Sandrelli personifies a liberated spirit who lives for the moment, but who can’t form the relationships we call ‘living.’ Antonio Pietrangeli and Ettore Scola slip an insightful drama into the young Sandrelli’s lineup of comedy roles. 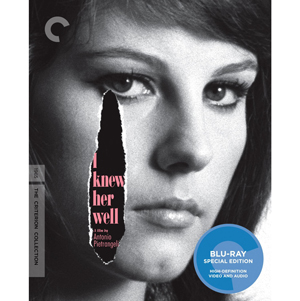 Did a new kind of woman emerge in the 1960s? They say that The Pill liberated a new class of young woman previously bound to the social order by sexual tyranny. The freedom to be independent allowed more adventurous women to pursue what they desired without first asking some man for permission. Serious ’60s movies about ‘independent’ women often presented their freedom as a problem, even if it was acknowledged that the woman wasn’t at fault: Alexander Singer’s A Cold Wind in August with Lola Albright, Frankin Schaffner’s The Stripper with Joanne Woodward. Both those movies are about an independent woman’s relationship with a younger man. I first noticed something new in John Schlesinger’s Billy Liar, when Julie Christie was seen walking down a sidewalk, with a big smile, swinging her purse. Looking fresh, strong and ready for anything, she is soon headed for bigger things in London. It would be nice for Christie’s self-assurance in that role to be carried forward, but the subsequent ‘swinging years’ images of women weren’t as positive. Christie’s real breakthrough movie would be the downbeat, bitter Darling. Her Diana Scott lives a dream life based on her beauty, but she can’t settle on any one man. She has an abortion so as to not lose her options, and ends up marrying for security. The film was perhaps the first to nail down the reality of the ‘jet-set’ lifestyle.

Almost concurrently in Italy, filmmakers Antonio Pietrangeli and Ettore Scola collaborated on a film that was expected to be a comedy. I Knew Her Well (Io la connosevo bene) is the much darker tale of an Italian girl, Adriana. Her story is similar, except that she doesn’t have the luxury of beginning at Diana Scott’s respectable social level. Although Adriana makes it into show business the men she meets want her as a convenient date and little else; there is no line of desirable men leaving their wives or showering her with luxuries. The film is often amusing, yet it never lets us forget that its outwardly glamorous heroine is mostly prey for both individual men, and a culture that commodifies beauty. 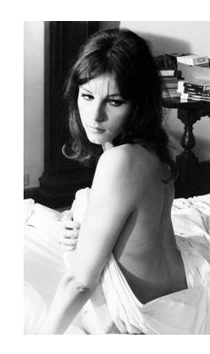 I Knew Her Well presents us with an Italian girl of the ’60s who seems timeless. The star Stefania Sandrelli is beautiful, but not a clone from the Italo sex goddess mold. Barely in her ‘teens, she had already enjoyed highly visible roles in Pietro Germi’s satirical comedies Divorce Italian Style and Seduced and Abandoned, and would go on to a long career with highlights like Bertolucci’s The Conformist. Here she must define an elusive model-actress-showgirl-playgirl, who doesn’t realize how little she is valued by those she meets.

A girl from a grubby peasant background, Adriana Astarelli has thrown herself into Rome as a model and eventual actress. She’s sweet, friendly, playful and easygoing to a fault. Along the way she’s used by so many men she can’t keep count. An agent-photographer (Nino Manfredi) takes her money for photos and gets her a gig modeling fashions in between bouts at a boxing match, of all places. A total heel named Dario (Jean-Claude Brialy) charms her off her feet and into a fancy weekend at a beach resort, only to leave her with the unpaid bill. She pays with an expensive piece of jewelry he’s given her, which she learns is stolen only when she’s picked up by the cops. The inspector on the case marvels at how detached she is from the normal worries of survival. What Dario has done only amuses her. She doesn’t even feel used. Does she value herself that little?

The interesting thing about Adriana is that she never plays the victim. She sees no reason to take much of anything seriously. She soon earns enough as a model — and as we see, as a player in a sword ‘n’ sandal movie — to drive her own little car and keep a fairly nice apartment in a high-rise. Adriana came from a hovel in a rural backwater — what does she have to complain about?

Plenty, actually. Adriana’s status as an independent woman makes her a target for various male predators. A writer (Joachim Fuchsberger of The Face of Fu Manchu) enjoys her casual company, but he mostly sees her as an inspiration for his description of this ‘new woman’ at large in Italy:

“She’s always happy. She desires nothing, envies no one, is curious about nothing… Yesterday and tomorrow don’t exist for her. Even living for today would mean too much planning, so she lives for the moment.”

Adriana whiles away the time playing music, of which the film samples some great sounds from the ’60s. For a while we think that she’s incapable of seeing the reality around her. Is she unaware that men see her as an easy conquest? That she’s socially unacceptable except as some man’s tag-along? Will she eventually become disillusioned? What happens when she does?

Nobody takes Adriana seriously, and although she behaves as if that’s fine, we wait nervously for some sort of bill to come due, not necessarily a moral reckoning, just a revelation of the unpleasant truth. Adriana’s abortion is a matter of plain necessity, and we do see some sort of undertow from that choice when she becomes devoted to babysitting a neighbor’s infant, even passing up an opportunity to meet a producer.

Adriana has many acquaintances but seemingly no close friends. The superficially helpful Barbara (Karin Dor of You Only Live Twice) invites her to a show-biz party. All the guests kowtow to a celebrity, ‘Roberto’ (Enrico Maria Salerno). The man is material success at its worst, a total pig that delights in teasing his host with the threat that he might withdraw his social approval. Adriana watches as the old-time actor Gigi Baggini (Ugo Tognazzi of La Cage aux Folles) readily humiliates himself in the search of a handout part in Roberto’s next movie. Gigi began years before as a dancer, and at Roberto’s insistence dances atop a table, a fast-shoe routine so intense that it looks like he could suffer a heart attack. It’s an ugly scene – Gigi almost kills himself to show the guests how cruel Roberto can be. Meanwhile, Adriana has caught Roberto’s eye. He doesn’t make any promises, and instead suggests that Gigi procure Adriana for his bed. “Why doesn’t he ask me himself?” wonders Adriana. Maybe she’s coming to understand the utter ugliness of her situation.

Tognazzi has the standout role in a constant parade of supporting actors. Robert Hoffman is one of many casual boyfriends — he has the nerve to ask her to help smooth things over for him with another woman. Adriana doesn’t seem to mind. Her first boyfriend (Claudio Camaso of Wake Up and Kill) figures in a scene where they come upon a fatal auto accident. The moment is scary in that we wonder if it is an omen for later tragedy, as in the Ettore Scola-penned Il sorpasso. Adriana can’t fall back on the fabric of a family life. We later learn that when she left home she left behind a beloved younger sister, who in her absence has come to a sorry end.

Pulling down second billing is Mario Adorf (Major Dundee) as Bietolone, a sweet-hearted boxer that Adriana meets after the match. As she helps him with his badly beaten face we see that she’s genuinely concerned. The sentimental reaction is to think that she’d better off finding any nice guy who could appreciate her. It’s not a case of Adriana wanting more, because she calculates nothing. No wonder guys looking to get lucky with pretty women find nothing wrong with insulting cold pick-ups. Adrianas do exist, and they’re so invested in the fantasy of the happy ending that any guy could be the right one. The pickup artist has nothing to lose. 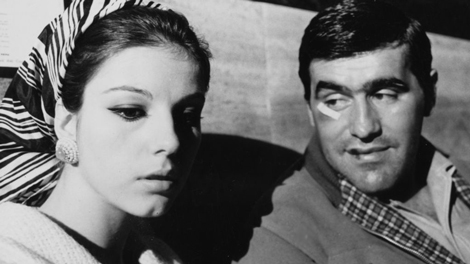 One of the last scenes in the show is a mostly wordless ‘swinging’ evening. An almost arbitrary connection at a restaurant turns into an all-night dash around Rome, complete with a crazy three a.m. boat ride. It all seems a pointless exercise in La dolce vita. When Adriana comes home, she gets a sincere yet numbingly familiar expression of interest from the handsome but penniless garage attendant (Franco Nero, on the cusp of better things). Adriana has no real reaction to offer. Does anything matter? Apparently not. I Knew Her Well convincingly sums up the pros and cons of the carefree lifestyle of the young and rootless.

Adriana Astarelli is somewhat more sympathetic than Julie Christie’s Diana Scott, just because she’s less capable of dealing with her problems. Diana finds herself in an emotional desert, but she’s a survivor and certainly not suffering for material things. Adriana is beautiful, but has a personality that men seem to find easy to abuse. She’s a new kind of tragic heroine, one who can’t even formulate why she feels unfulfilled. Instead, life seems to get more and more unreal. She cares just enough to do something rash on a moment’s whim.

A 1969 American movie with Jacqueline Bisset of tried to do the same thing. The Grasshopper sees Bisset’s Las Vegas showgirl so pummeled by bad men, bad fortune and “an evil world’ that she becomes a profane sensationalist who cares about nothing. Weakly directed, looking for exploitative moments, the show doesn’t do Ms. Bisset justice. Of course, in comparison to Pal Verhoeven’s vulgar 1995 atrocity Showgirls, The Grasshopper is sensitive social comment. We’re told that I Knew Her Well is listed as a top title in Italian cinema, even if it is not that well known today.

The Criterion Collection’s Blu-ray of I Knew Her Well is a dazzling widescreen B&W scan of this smoothly filmed character study, with scenes ranging from a hilly goat farm to fancy parties, restaurant gatherings and an enormous scene in a boxing arena. But what we remember is Adriana’s high-rise apartment, that she can’t really call a home.

Criterion gives us a new interview with the still- radiant Ms. Sandrelli, who is candidly pleased to have this early picture revived in such a good presentation. A second interview piece allows critic Luca Barattoni to advance a biographical sketch of director Pietrangeli, a director with an acute sensitivity to women characters (as in the marvelous Adua e le compagne). A special treat is Stefania Sandrelli’s filmed audition. A trailer rounds out the disc extras, while the informative insert essay gives us the analysis if author Alexander Stille.

Of special note is the film’s upbeat soundtrack. Piero Piccioni’s pop tunes pull us immediately into the spirited A.M. radio feel of the time. Often alone, Adriana uses a phonograph to keep her company. One piece repeated several times is an English language song that sounds a lot like Barbie Gaye’s 1956 bubblegum song “My Boy Lollipop.”