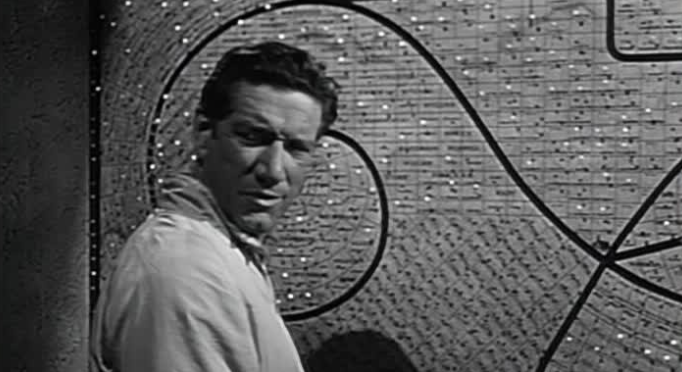 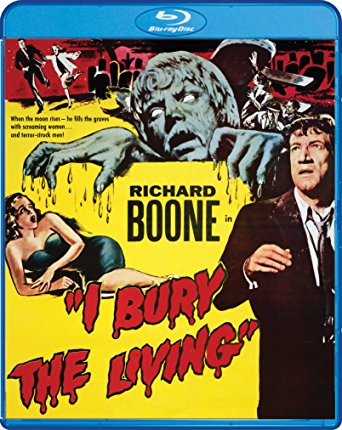 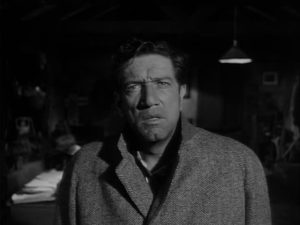 I Bury the Living implicates us in a primal childhood thought-crime… what if you stepped on a crack and really did break your mother’s back? What if simply wishing someone dead made it so? Guilt, pure and simple, gives this off–kilter 50’s chiller its lasting power.

The film boasts an off–kilter leading man as well with the crater-faced Richard Boone as Robert Kraft, a small town business man railroaded into managing the family run cemetery. To make matters worse, the perennially gloomy Kraft, already skittish about his disconcerting new position, is saddled with a decrepit, unnaturally chilly workplace watched over by an unnerving bit of decoration, an eerie map of the cemetery grounds. The map harbors its own macabre special feature: black pins indicate the already deceased inhabitants while white pins designate the graves awaiting their eventual occupants.

New to the burial game, Kraft mistakenly uses a black pin instead of white to reserve one of the plots, leading to unexpectedly deadly consequences. When several more deaths occur under the same sinister circumstances, the jittery Boone begins to wonder, what if instead of a black pin, a white pin were placed in the slot for the dearly departed? A shock cut to the earth erupting around an empty grave gives him the answer. 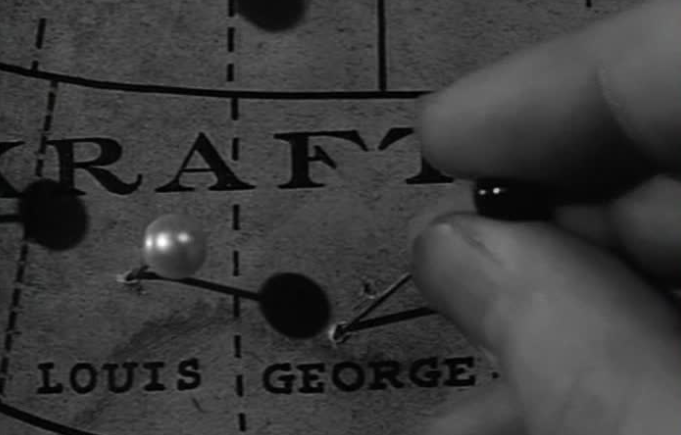 Director Albert Band had a fascinatingly unpredictable career that featured mostly low budget fare like Ghoulies II and Dracula’s Dog. But by all rights he should be remembered not just for the spooky twists and turns of I Bury the Living but his follow-up film, 1959’s Face of Fire. Based on the Stephen Crane short story The Monster and shot in Sweden with several key members of Ingmar Bergman’s regular crew, this quasi-horror movie is an admirably ambitious tale about pride and prejudice in small town America. 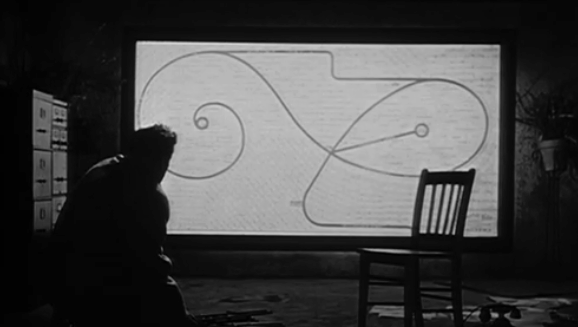 I Bury the Living retains little if any of that ambition but it has a memorably morbid atmosphere, enhanced not just by Boone’s nerve-jangled performance, but its startling montage sequences and art direction as well, including a nightmarish jaunt through the graveyard and that cemetery map which becomes, over the course of the film, both an hallucinatory dream object and antagonistic co-star to Boone’s feverish anti-hero.

Edward Vorkapich, son of the great montage creator Slavko Vorkapich, is credited as “Visual Designer” and it is surely the younger Vorkapich’s influence in those chilling cemetery sequences as well as in the design of the spooky map itself, its swirling contours suggesting a pair of accusing eyes bearing down on our brooding hero.

Shout! Factory’s blu ray looks generally fine but unfortunately it’s no revelation in picture quality. Close-ups of Boone’s intimidating proboscis are amusingly sharp but the overall clarity is variable throughout. Nevertheless, the film looks better than it ever has outside of its original release and those defects do nothing to detract from the forgiving fan’s enjoyment of this singular one-off from United Artists circa 1958. A relatively bare-bones release, Shout! has included a photo gallery and original movie trailer. 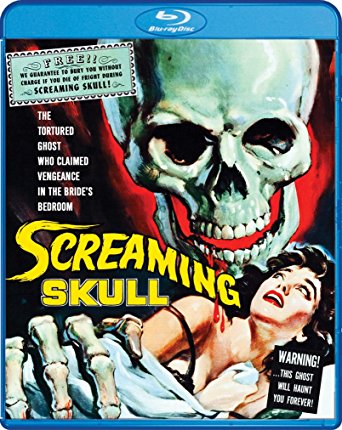 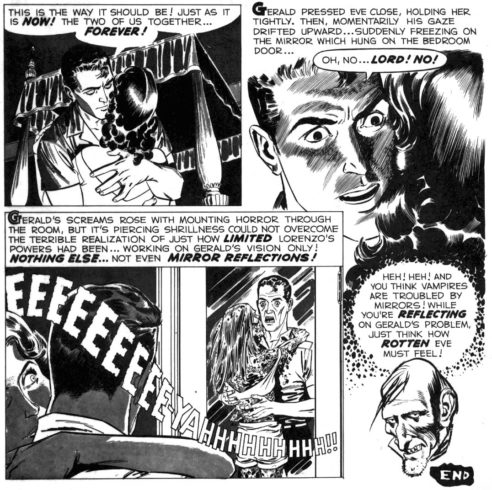 The great comic artist Johnny Craig, with his bold and compulsively clean graphic style, specialized in the larcenous behavior of 50’s suburbanites who often received their comeuppance in the form of a vengeful ghost or zombified girlfriend. Craig would have had a field day illustrating The Screaming Skull and, after enduring its 68 minutes, you might wish he’d directed it, too.

John Hudson and Peggy Webber are two newlyweds who move into the dilapidated mansion once owned by Hudson’s recently deceased wife and things go downhill from there. Webber, the “nervous” type as they used to say, furrows her brow at the strange atmosphere of the estate; a mossy, neglected swimming pool, a once-grand bedroom reduced to squalor and, most alarming, the weird cooing of peacocks nesting in the unkempt garden. Prowling the manor in an invitingly transparent nightgown, our zaftig heroine’s frazzled nerves go into overdrive when a gravity defying skull, teeth wide open and most definitely screaming, makes an appearance in her linen closet.

An ultra-low budget feature released by American International Pictures in 1958, Skull was directed by erstwhile actor Alex Nicol, principally because his career was becoming a little too erst (Nicol co-stars in the film as an addlepated gardener). Whatever one might say about the skill involved in assembling this nonsensical potboiler, it’s certainly not boring (it’s too short for that) and there’s something reassuring about its spooky predictability, like an oft-told bedtime tale for the Addams’ kids. 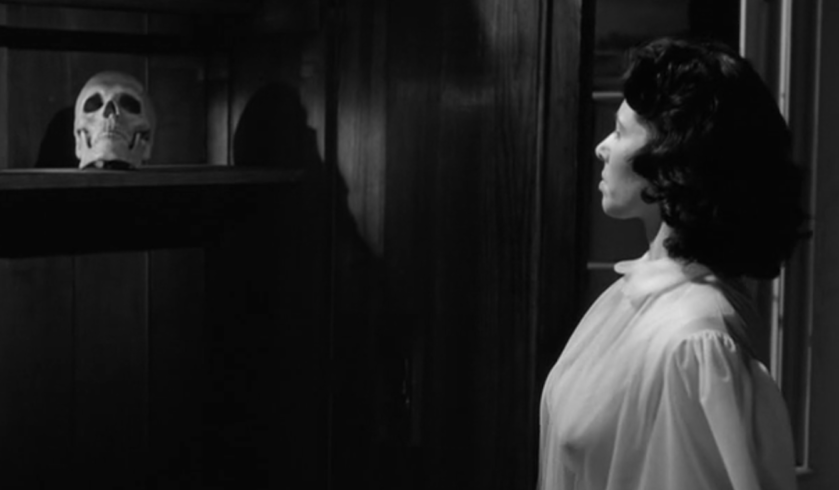 Sowing the seeds for his future at AIP is cinematographer Floyd Crosby, Roger Corman’s go-to guy for his string of luxuriously lensed Poe films. The Hardy Boys’ dad Russ Conway lends his reassuring presence as a serenely cool minister and future Exodus composer Ernest Gold provides a thumping, horn-driven score that does a mind-meld with Gerald Fried’s I Bury the Living theme (each film was released the same year but conspiracy theorists are still sharpening their pencils).

Shout! Factory’s blu ray looks really terrific with deep pools of black and fine, subtle contrasts. They’ve gone the extra distance with their supplements including a short “documentary” about the making of the movie, a photo gallery and trailers (looking very dodgy) for the film. The most special of special attractions is the addition of the 1998 episode of Mystery Science Theater 3000 and their affectionately snarky take on the adventures of our favorite airborne skull.