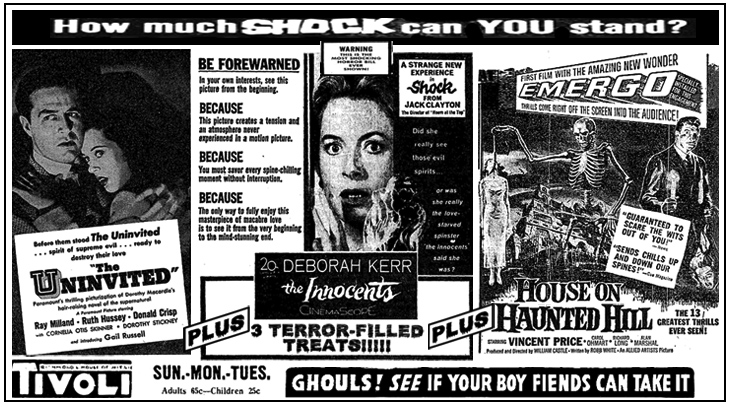 Ghosts are famous for their flexibility, spiraling through keyholes and up from the floorboards in search of their next mark. But movies about ghosts can be flexible too. Three classics of the genre, The Uninvited, House on Haunted Hill and The Innocents, demonstrate that there’s more than one way haunt a house.

These films never appeared on any triple bill that I know of, but I’d like to think they did, somewhere in some small town with a theater manager that knew a good scare when he saw it. How could the programmer resist it? Each film is united by a beautiful black and white sheen, eerie locales and their ability to scare the bejeezus out of you. But they’re also alike in their differences, coming at their specters from distinctly different vantage points.

1944’s The Uninvited, a three-hankie haunted house tale with a dysfunctional family subplot, is unique in its ability to shiver your spine and break your heart at the same moment. Ray Milland and Ruth Hussey play a free and easy brother and sister team who, almost on a whim, purchase a rundown mansion resting upon a lonesome Cornwall cliffside – with a roiling sea breaking below for added atmosphere. It soon becomes clear that the place is in fact not that lonely – the siblings have company – a disconsolate spirit whose sobs echo through the hallways while leaving the scent of mimosa in its wake.

Milland befriends and then falls in love with a lovely local girl named Stella who once lived in the house; she holds the key to not only the estate but its mystery as well. She’s played by Gail Russell and her plaintive, far-away gaze makes her a perfect match for the perennially bedeviled Milland. Of all the stars and starlets on the Paramount lot, they were the ones most defined by their melancholy backstories.

The movie is directed in a warmly intimate manner by longtime journeyman Lewis Allen and eloquently lensed by Charles B. Lang (warming up for his work on The Ghost and Mrs. Muir). The screenplay by Frank Partos and Dodie Smith escalates the terror and romance in equal measure and their revelation of a second ghost prowling the attic succeeds in deepening the mystery as well as our formidable emotional investment in the characters, particularly Russell’s heartsick waif. And of course, one of the film’s lasting contributions is Victor Young’s theme song, Stella By Starlight which has inspired artists from Miles Davis to Walter Scharf (whose big band version revs up the title sequence for The Nutty Professor).

Being a Paramount film, it has its moments of whimsy but when that demonic ghost finally raises her head, the resulting frissons let you know the happy-go-lucky studio who gave us The Marx Brothers and W.C. Fields is not playing around.

There’s plenty of playing around in 1959’s House on Haunted Hill but tell that to the terrified 8-year old cowering beneath his seat. 30 years later that kid will appreciate the wit in Robb White’s screenplay and the joy in Vincent Price’s performance and still be slightly spooked (and tickled). Price plays a wealthy industrialist hosting an all-night blow-out in L.A.’s most famous haunted house (its exterior, resembling an aztec fortress, is by Frank Lloyd Wright and one of his most intimidating designs). 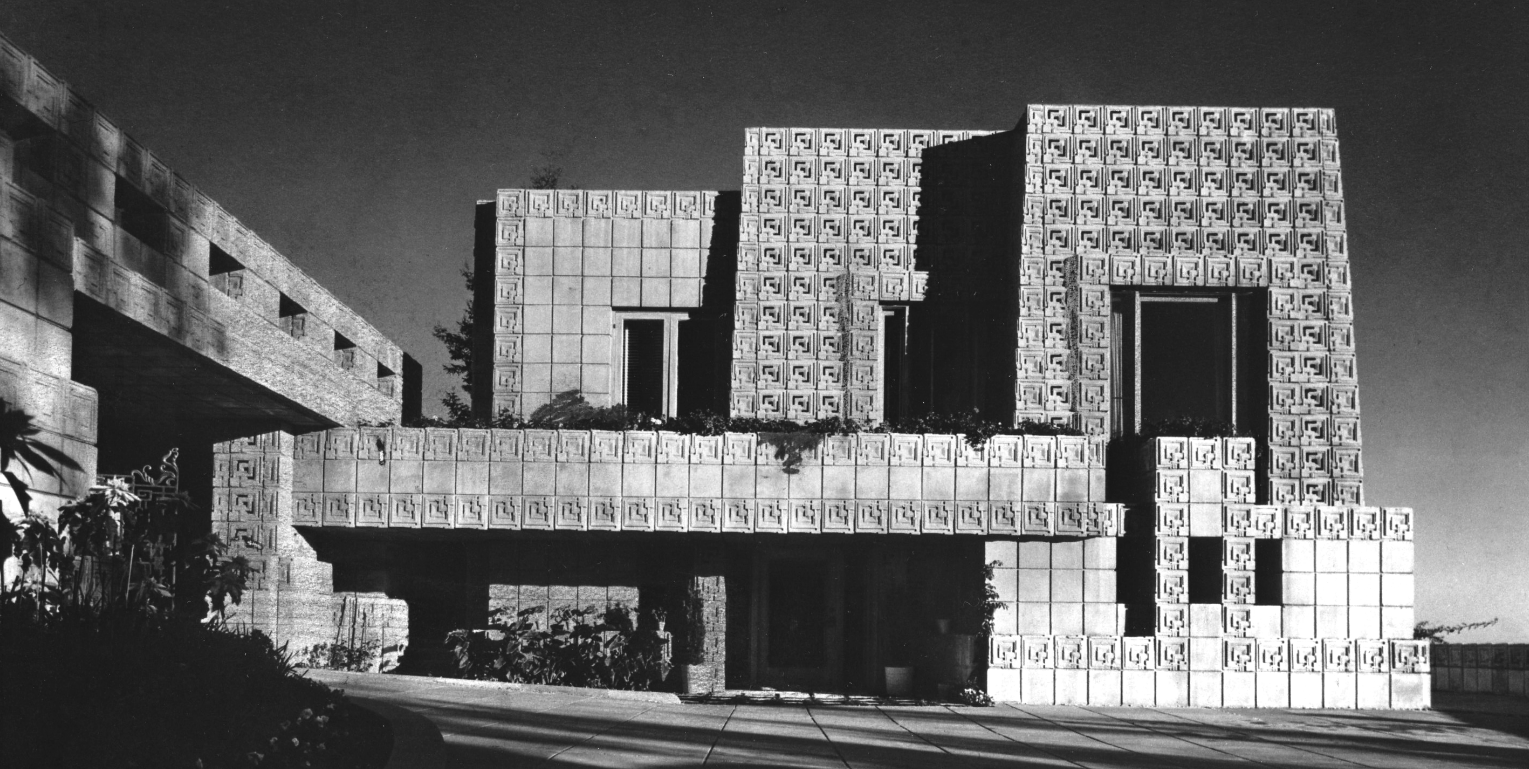 During the thrill-packed evening the motley crew suffers a variety of unnerving manifestations; disembodied heads, a ceiling that drips blood and a bubbling acid vat with auxiliary skeleton. But its the ghost’s prime target, Carolyn Craig, and her hair-raising run-in with a flesh and blood caretaker, that will forever seal Haunted Hill’s plaque in the Wet Your Pants Hall of Fame.

Director William Castle devotes the final moments of the film “explaining” the mystery ala Psycho’s finale, giving the sweat-drenched youngsters in the audience a moment of comfort. But that sense of relief is cut short as Elisha Cook Jr. (playing a nervous variation on Wilmer the gunsel from The Maltese Falcon) turns to the camera and announces, the ghosts “are coming for you”. A quick dash through the lobby and into the embrace of the noonday sun is the only sane reaction.

Those kids weren’t alone; a similar sense of dread lingered over theaters showing The Innocents in 1961. But in Jack Clayton’s stylish chiller, the dread is intangible, not carnival skeletons or the clutching hands out of a cheap thriller, but an inescapable scent of rot that infects both the atmosphere and the lost souls at the heart of the play.

Deborah Kerr plays Miss Giddens, a governess recently charged with two otherworldly children, Miles and Flora, beautiful in their appearance and unnerving in their peculiarly grown-up composure. Save for the cook, Giddens and the children are alone in the enormous mansion, by day a perfect arena for hide-and-go-seek but by night it’s a different matter as the skittish nursemaid begins to suspect there’s something besides the children hiding behind the curtains.

Miles entertains the nervous au pair with stories about the unspeakable relationship between the former nanny Miss Jessell and the brutish groundskeeper Quint who both died in mysterious fashion. For Giddens, the very model of a demure English rose, the morbid child’s perversely insinuating tales become something more than mere diversion; her consuming fantasies about the lover’s liaisons are, quite literally, enough to raise the dead. Perhaps.

The Innocents is a tricky tale, determinedly ambiguous about its ghosts until physical evidence of the haunting turns our earthbound theories on their head. Clayton’s handling of such delicate and thorny material is impeccable. Standing shoulder to shoulder with the director is the great cinematographer Freddie Francis whose widescreen imagery reflects the enigma of the film itself, lustrously detailed but opaque when it matters, such as the vision of Miss Jessel from across a pond that makes us doubt our senses as much as we doubt Miss Giddens. Composer Georges Auric (Cocteau’s Beauty and the Beast) contributed the beautiful and sinister score.

Audiences of 1961 were no fonder of cryptic head-scratchers than they are today, The Innocents was a flop (some contemporary critics like Bosley Crowther, unadventurous to the core, threw in with the huddled masses warning ticket-buyers they might “feel a bit bored” by Clayton’s inconclusive conclusion). Today the film rests at the top of everyone’s best-of lists and more than retains its power to shake patient viewers with its elegantly perverse denouement. That denouement comes with a double-edged word of warning; take care of that beckoning ghost and beware the unassuming governess whose mind is as fragile as her beauty.

There are many worthwhile ghost movies finding new ways to bend the rules, from The Ring to The Others to Personal Shopper. And for your dining and dancing pleasure, you can read Glenn Erickson’s reviews for the Blu-ray releases of The Uninvited here, House on Haunted Hill here and The Innocents here.