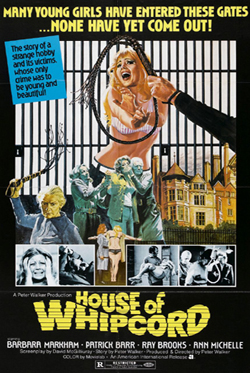 House of Whipcord, director Pete Walker’s S&M take on women in prison films, could be considered a template for present-day horrors such as Saw and Hostel and though most of the violence in Whipcord is offscreen, Walker manages to sustain a queasy atmosphere that packs a contemporary punch. The story of a senile judge and his sadistic lady friend who officiate over a private “prison” for wayward girls, this 1974 film is notable for its strong performances and politically charged subtext assailing the English courts.