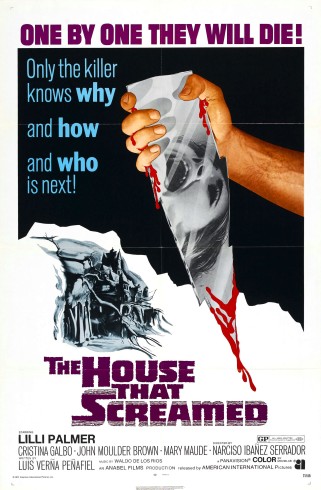 While it blazes no new trails in the horror field (ghoulish doings at girls’ school is hardly a new theme, especially for AIP), The House that Screamed is an exploitable, classily‑assembled period chiller with plenty of seedy, menacing atmosphere. Mixing various elements of suspense, muted sex and violence, the AIP import was very big on its home ground (Spain), where it was shown in 70 millimeter as La Residencia (“The Finishing School”), and figures to be an equally solid attraction for US horror markets. “I believe in healthy minds and healthy bodies,” preaches Lilli Palmer, widowed owner of a decadent girls’ school in the South of France, whose healthful ideals encompass frequent beatings and incipient lesbianism. She runs her school like a prison, since most of the girls are of low repute, and everyone smoulders with repressed passion.

The lesbian angles are expressed primarily through flushed GP‑level glances. Rounding out the general air of unwholesomeness, Miss Palmer’s 15 year‑old son John Moulder Brown (First Love) spies on the girls through every nook and cranny, much to the chagrin of mother, who’d rather he waited for a girl more like herself. Several girls have already disappeared when pretty Maribel Martin, one of the boy’s erstwhile girlfriends, is brutally knifed one night while trying to run away. Cristina Galbo, the heroine, has her throat slit soon afterward, and aggressive, perverted but beautiful Mary Maude suspects Miss Palmer. However, Ms. Maude is found in the attic, quite dead and missing a hand, by Ms. Palmer. Her son appears and leads her to a table upon which lies a fly‑ridden, decomposing cadaver which, he calmly explains, he has been assembling from parts of the murdered girls, modeling it after Mom.

Director Narciso Ibanez Serrador (who gets script credit on the prints, although Luís Verna Penafiel is credited in ads) gets the most out of a story in which nothing much really happens, but something quite horrid always seems about to. Manuel Berenguer’s prowling camera, Waldo De Los Rios’ music and some instances of sharp direction help make this one of the better recent horror entries. Though the first murder is very effectively done in slow motion, the second goes into a suspicious freeze‑frame just before the action, which looks like a post-production concession to the GP rating. Cutting is also apparent in the plot progression. The acting is adequate to the demands of the story, and production designer Ramiro Gomez’ cobwebby, decaying mansion recalls the best Italian horror films. The Franscope Movielab Color is good.

The House that Screamed has never been given an official release on home video, but is available from Sinister Cinema here.