It’s the one Gunfight at the O.K. Corral saga that puts Western legend into proper perspective as to the nature of money, power and the law: Edward Anhalt’s vision is of a gangland turf war with sagebrush and whiskey bottles. James Garner is a humorless Wyatt Earp, matched by Jason Robards’ excellent Doc Holliday. It’s one of John Sturges’ best movies. 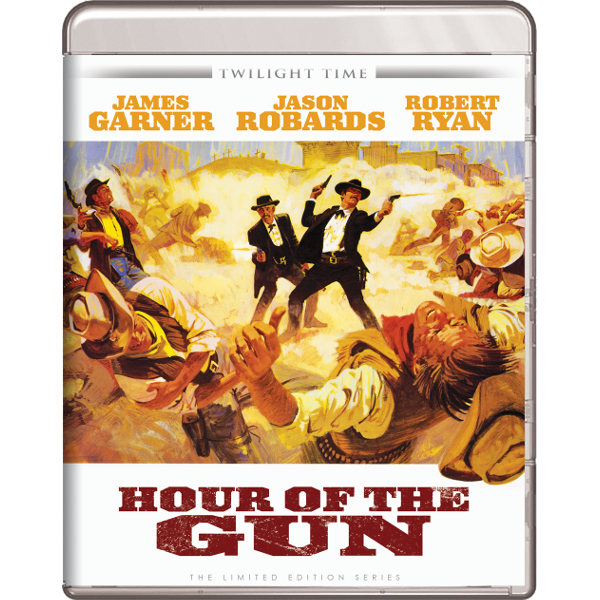 Producer-director John Sturges’ Hour of the Gun was a dismal non-performer in 1967, but almost immediately became a critics’ favorite for movies about Wyatt Earp and the O.K. Corral. In every review Savant has written of a Wyatt Earp movie – My Darling Clementine, Tombstone, Wyatt Earp — I’ve repeated the opinion that this is the most satisfying version. The whirlpool of events around the O.K. Corral were more like a gangster story than the making of myth in the Streets of Laredo or El Paso. This film’s Wyatt Earp is one of the few Law & Order figures to be properly portrayed on the big screen. He has a sense of justice but is no altruist.  90% of his motivation is pure revenge, a fact he knows better than anyone. Wyatt’s political boosters consider him a potential pillar of society but it takes his best friend, a discredited gambler and killer, to make him face the truth. Screenwriter Edward Anhalt completely de-mythologizes a legend.

Hour of the Gun surprised people by beginning the story where it usually ends, with the gunfight at the O.K. Corral. In the pre- The Wild Bunch, pre-revisionist year of 1967, everything about John Sturges’ movie came as a sobering surprise.

A rigged confrontation at the O.K. Corral between the ranchers and lawmen of the Earp Family and the gunmen of rancher/political aspirant Ike Clanton (Robert Ryan) turns into a bloodbath. Judge Herman Spicer (William Schallert) tries to keep a clear view, what with Clanton’s hired killers lawfully employed as bookkeepers and stock breeders. Clanton wants political control of the Arizona territory so that he can wield power when statehood comes, and that means nullifying the interests of his business competitor Wyatt Earp (James Garner). Earp has already taken office as city marshall to legitimize his opposition to Clanton’s power grab, and has hired his notorious gunfighter friend Doc Holliday (Jason Robards) to back his play. The Tombstone business community supports Earp against Clanton as bloody reprisals up the body count. Only the tubercular Holliday has the big picture: Earp’s cause may be just but practical legality is a joke: both sides have their pockets stuffed with arrest warrants. Earp decides to corner Clanton’s killers one by one. Knowing that his friend’s aim is cold revenge, Holliday challenges him to acknowledge that the papers he carries are not warrants, but hunting licences.

In 1956 John Sturges made the glossiest and (then) most profitable of the golden-age Tombstone sagas, Gunfight at the O.K. Corral. Like most of the versions, it paints Earp and his martyred brothers as lily-pure lawmen striving to bring peace and justice to the territory. The Ike Clanton gang are just lawless scum in dire need of extermination.

In Hour of the Gun, Sturges follows the reflective direction of John Ford, whose westerns of the previous decade had addressed the subjects of racism, mob mentality and the fate of the Indians. In the crazy political climate (‘polarized’ is the safer word) of 1967, Hour of the Gun played like a criticism of core American values. After ‘printing the legend’ for over a century, it was time for the country to grow up and realize that America not only didn’t hold the copyright on righteousness. Our history wasn’t the shining chronicle of virtue taught in school.

Author Edward Anhalt’s long list of admirable film credits include several films for Sturges. He pares the drama down to the political facts of the Clanton-Earp feud. Nobody admires the pretty scenery or hopes for a glorious garden to be raised from the desert. Most of the talk is about conflicting legal jurisdictions and warring political factions butting heads. It’s really a gang war with both lawfully deputized sides posturing to maintain a good front and refusing to flinch under provocation. As a perceptive critic observed, the incident at the O.K. Corral is more like an L.A. drive-by than a Gunsmoke– style shootout. This is a gangster film in western dress. To be honest, most of the ‘legends’ of the west are sordid crimes stories of one kind or another.

The story arc plots the deterioration of Wyatt Earp’s moral stance. He begins with a clean conscience but as the body count goes up the fighting becomes too personal to stick to the rule books. The main killings are assassinations directed against political candidates, with the aim of controlling the balance of power in the territory: Tombstone is no more civilized than a Banana Republic. Wyatt maintains an ethical posture for his business backers, who have as much to gain from Clanton being booted from Tombstone as Clanton has incentive to take over.

When the going gets tough and good people start dying, Earp takes the gloves off and starts killing those he’s authorized to arrest — goading some into one-sided duels and all but executing others. When one is the only law in the territory and lives are on the line, cutting corners comes naturally. Wyatt’s evasions and rationalizations are just that. Hour of the Gun is pure series of violent incidents, not a noble story of good triumphing over evil. That’s how things really happen in history.

The Earp/Holliday relationship is less sentimental than in other versions. Holliday is Earp’s conscience: he has to know he’s doing wrong when a known killer is critical of him. Jason Robards’ best work was on stage, with only a few film roles worthy of his talent. A couple of his dramatic exchanges in Hour of the Gun are more powerful than any gunplay. His Doc Holiday is cynical-sentimental; at several junctures his speeches resemble, of all people, those of John Heard’s Alex Cutter in Cutter’s Way. Holliday is drinking himself to death, yet when a friend takes a sip of the liquor that he’s swilling down, he mocks himself with a joking warning: “I wouldn’t drink that if I were you!”

Robert Ryan is a great Ike Clanton, the kind of pragmatic scoundrel who realizes the country is changing and isn’t above lawbreaking to secure himself a place in its future. Clanton might run for public office but would probably prefer to control things from behind the scenes. Stuck in a dried-up wasteland, he must steal cattle to finance his ambitions. He’s a big shot but also a failed ‘Mr. Potter,’ a ‘warped, frustrated old man.’

I’ve seen documentaries filmed in the real Tombstone. The surrounding countryside is a lot greener, even now. And the spa above Glenwood Springs, Colorado, where Holliday checked in from time to time, is even more forested. But Sturges’ handsome film has his expected great feel for desert vistas. We also get a brief side trip to a gentrified Denver and a suspenseful detour into Mexico.

The chosen title is perhaps too generic, but perhaps the best explanation why the film did not do well theatrically is its overall tone. In 1967 the country was still in the mood for escapist, fun westerns with a boozy John Wayne hitting people and Maureen O’Hara falling in the mud For an easy laugh. Audiences were just discovering Sergio Leone’s cynical shooting-gallery Spaghettis.

I don’t think audiences were ready for a completely humorless James Garner. The actor was never fully accepted outside of his smart-mouthed Maverick personality. Garner tried his luck in a variety of genre works, like the Raymond Chandler update Marlowe, but didn’t hit paydirt again until returning to television and the Maverick– like The Rockford Files. Haunted by his dead brothers, Garner’s Earp does not joke around. He has no love interest and the film has no leading lady. We see only one merchant’s wife and a few other women in longshots. That’s not good for general audience appeal.

After a string of major successes (The Magnificent Seven, The Great Escape) John Sturges put out a number of what would be called ‘interesting’ pictures that weakened his brand. The only outright mistake was 1965’s abortive The Hallelujah Trail, an expensive comedy with no laughs. Besides a couple of respectable exceptions (The Satan Bug, Joe Kidd) his career went downhill with Ice Station Zebra and the simply awful Marooned. Still, Hour of the Gun deserves to be pushed closer to the top of the list of great westerns.

Fans in 1967 may have felt betrayed when the show didn’t end in a spectacular shootout. How could Sturges, or producer Walter Mirisch, think that a western without a bang-up finale would be a hit?

In hindsight, I’d have tacked on a new final scene, two more minutes with a reflective, drawn-out replay of the O.K. Corral battle that started it all, perhaps seen from different angles. Slow motion would be nice; in 1967 that device was just being re-discovered in pictures like Point Blank. The pretext would be that Wyatt Earp finally accepts that his entire life is going to be judged on that crucial thirty seconds of gunplay. The show’s commercial bases would be covered, and fans of bang-bang western would have walked out satisfied.

Then again, how many old filmmakers frustrate themselves by mentally reworking their films years later? Hour of the Gun is an uncompromised classic Law & Order western just as it is. I only wish it could have been a bigger hit.

The Twilight Time Blu-ray of Hour of the Gun is a good encoding of this mostly Mexico-shot western, with HD images that give snap to all of those wide, wide Panavision vistas. Sturges knows when to film up close, and when to sick his camera tripod a thousand yards from a dusty roadway.

The transfer does not appear to be new, and has the same minor speckling, and occasional tiny marks of the old DVD. Colors are good and only one or two scenes seem a bit off in hue. If you have the DVD from 2005, it looks identical, but much sharper. When Sturges has seven or eight actors on screen together, we can read their faces much better. This allows us to appreciate Jon Voight’s attempt to make more of his four or five walk-ons, two or three lines of dialogue, and rather brutal exit. Yes, there was a chance that he could leave Fearless Frank behind. (But who would want to?)

The isolated music and effects track showcases Jerry Goldsmith’s great score, which ranges from melancholy themes to a main theme that bounces along while even expressing some of the irony of Wyatt Earp’s vendetta. One cue with horses splashing in a riverbed crashes into motion with a construction that sounds like Goldsmith’s more romantic score for The Wind and the Lion.

The only extra is a trailer that previews most of the action, including a shot of a man with a big hole in his forehead. It strives hard to generate interest with the idea that the show begins, not ends, with the gunfight at the O.K. Corral.

Julie Kirgo’s liner notes on the insert pamphlet stress the history and the moral underpinnings of the Anhalt script while lauding the high roost Hour of the Gun sits among westerns — it is in the tradition of de-romanticizing that would continue with The Wild Bunch.