“Grand Hotel. Nazis come. Nazis go. Nothing ever happens.” That’s a paraphrase from 1932’s Grand Hotel, indicating that the hallowed halls once occupied by Greta Garbo are now overrun with Warner Bros. contract players. As defeat looms, German officers, crooks, fugitives and ordinary citizens fumble for a way to survive. Writer and fervent anti-fascist Alvah Bessie almost didn’t — he would later be politically scourged as a member of The Hollywood Ten. Get set for a soap opera with swastikas. 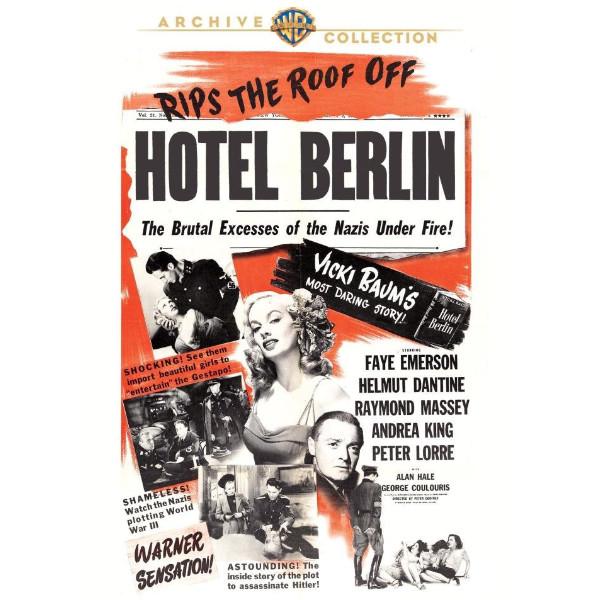 Here’s a WW2-era thriller with a peculiar problem — how to dramatize a situation in the enemy’s capital. The Oscar-winning picture made from Vicki Baum’s novel Grand Hotel was just ten years old when she wrote Hotel Berlin ’43, a potboiler in which sordid Nazi intrigues stain the halls of the proud establishment. Warners developed a movie version but kept having to alter the story to fit the fast-changing world events, even as the cameras rolled. Finally filmed late in 1944, Hotel Berlin is a highly unlikely thriller with more to its propaganda mission than simply raising morale. Its 1945 and the Hotel Berlin is being bombed almost every night. The hotel is packed with nervous Germans, some in denial and all struggling to resolve their personal issues. The scheming Nazi strategist Baron Von Stetten (Henry Daniell) has arranged a submarine to relocate himself and some others to await a time when the Nazi banner can be raised again. Scientist Johannes Koenig (Peter Lorre) is drinking himself insensate over his guilt for carrying out experiments at the Dachau concentration camp. Hotel porter Fritz (Frank Reicher), a member of the resistance, uses his extra uniform to allow Dachau survivor and resistance leader Dr. Martin Richter (Helmut Dantine) to evade the Gestapo. A young bellhop is also part of the underground. Police commissioner Joachim Helm (George Coulouris) orders searchers but cannot locate Richter. Into the hotel arrive two prominent soldiers. On a brief leave, ace pilot Major Otto Kauders (Kurt Kreuger) wants excitement and female companionship. Cultured aristocrat General Arnim von Dahnwitz (Raymond Massey) is the last undetected conspirator in a failed plot to kill Hitler. He plans to flee to neutral Sweden, but Von Stetten brings the bad news that hes been identified. Von Steffen entreats the General to take his own life before the Gestapo can arrest him.

Two very different women are involved as well. Hotel good-time girl Tillie Weiler (Faye Emerson, pictured just above) pretends to be charmed by Major Kauders, when she’s really intent on getting the money for a decent pair of shoes. Then her estranged mother Sarah (Helene Thimig) arrives, to beg Tillie to find medicine for Tillie’s dying father. The big-time movie star Lisa Dorn (Andrea King) is just now beginning to realize that her future as a Nazi celebrity is in doubt. General Dahnwitzs last hope is that Lisa will marry him and escape with him to Sweden. Shes dealing with that problem, when she realize that the server hanging around her suite is the resistance terrorist everyone is looking for.

The hotel somehow maintains its decorum despite frequent air raids. Angry at the pompous fat cat Herman Plottke for not giving her money, Tillie denounces his greedy disloyalty in the crowded bomb shelter. Lisa helps Dr. Richter make a tentative contact with underground agents not far away, but soon bodies are being hidden in elevator shafts, and the hotel is put on lockdown by the police. The patient, agreeable hotel desk clerk Kleibert (Steven Geray) receives bad news — he’s been drafted.

Hotel Berlin is a barely-organized collection of characters and fairly accurate guesswork about the crumbling Reich in the German capital. Part of the movie is pure anti-fascist patriotism, and the rest is a thriller in the tradition established by Casablanca. Other positive but unlikely resistance tales from Warners were Passage to Marseille and The Conspirators.

The movie’s most progressive idea is that after the downfall of Hitler, America will have to be on guard against surviving Nazi elements. Other escape plans fail, but Baron Von Stetten is last seen exiting the hotel to make a rendezvous with a secret U-Boat. Curiously, this exact idea is the basis of René Cléments superb 1947 Les Maudits (The Damned). A group of identical Nazi generals, politicos and hangers-on take a secret submarine to Argentina, to carry on the Nazi struggle.

Co-screenwriter Alvah Bessie had already fought against Fascism in Spain. A communist party member, he was aware that the right wing that had delayed our entrance into the war would bounce back as soon as the victory was won. Washington immediately attacked the movies for subversive elements, naming Alvah Bessie as a leading subversive. Co-screenwriter Jo Pagano also had credentials as suspicious social critic. He later wrote the searing, socially critical anti- capital punishment shocker The Sound of Fury aka Try and Get Me!, from his own novel.

A large part of the movie is pure thriller nonsense that some might think trivialized the grim conditions in Germany and occupied Europe. Judging by Hotel Berlin, one would think that the German capital was a hotbed of resistance activity. The police commissioner works out of the hotel, yet resistance agents and fugitives come and go on a daily basis. Although the city has been bombed to bits, just a few blocks away is a resistance headquarters, where Roosevelt-quoting German patriots serve coffee to downed Allied bomber crews. The hotel’s residents aren’t exactly screen originals. Kurt Kreugers a sex-mad flier seemingly loses interest in Tillie Weiler when the subject switches to the shoes she can’t buy on the black market. As the corrupt opportunist, Alan Hale sticks out like a sore thumb — he disrupts the drama because we know too darn well that he’s jolly Alan Hale, Robin Hood’s best buddy. Helmut Dantine’s soulful rebel hasn’t much to do but listen to other people, whether it’s Andrea King’s unrealistic actress, or Peter Lorre’s guilt-soaked scientist. He should be projecting noble heroism, but just comes across as sullen and gloomy.

Lorre’s Dr. Koenig seems to have been cobbled together from rumors. Hes a scientist forced to work for the Germans — in Dachau? We aren’t told exactly what kind of work Koenig was doing, and the authors probably didn’t know either — all knowledge of events and activities inside occupied countries were kept secret during the war. Information about secret weapons tests and atrocious German medical experiments came to light much later.

The only Germans who seem to know what they’re doing are the villains, Henry Daniell’s hiss-able ideologue and George Coulouris’s grim policeman. Raymond Massey’s Prussian general doesn’t feel very German, even with his monocle. We feel sorry for him, and its not certain that that was the authors intention. The overall serious tone doesn’t quite go with the dodgy spy-jinks: rebels hide in closets, a call-girl tries to steal a pair of shoes, and conspirators discuss their anti-Nazi activities loudly, with Nazis listening through doors. A welcome relief from the sobriety is Steven Geray’s charming desk clerk. He makes anti-Hitler jokes right out in the open, which would not seem a recommended thing to do.

When it comes time to resolve the two female characters, the storyline twists into a pretzel. In the book, Tillie is just a barfly who sells herself to get a pair of shoes. The more prominent movie star Lisa Dorn is a relative innocent, who harbors the fugitive dissident, gains a conscience, and escapes with him. The movie version was turned upside down when actress Faye Emerson became engaged to President Roosevelt’s son. To capitalize on the relationship Warners gave her top billing, and rewrote the script to make Emersons Tillie Weiler the heroine, reuniting with her mother and going over to the side of good. Since Tillie can’t be shown sleeping with men, it’s unclear just how she’s supposed to be getting along in the hotel, ‘living off the kindness of strangers.’ She still comes off as a shallow ditz, always focused on decent footwear. It should be funny when the resistance people promise to get her a pair. Although her part is still big, Andrea King was busted down to fourth billing. To reflect the change, her Lisa Dorn character is converted into a villain at the last minute. She risks her life to hide Dr. Richter, and even takes part in the killing of a Nazi official, yet suddenly becomes an informing rat, and suffers the consequences. It all seems unfair, especially seeing how well Andrea King’s excellent performance smooths out the bumps in the script. Whether staving off marriage proposals or confronting her unwelcome fugitive guest, King is always believable.

Faye Emerson’s marriage to Elliott Roosevelt would only last four years but she continued as a presence on stage, TV and an occasional movie. Fans of Between Two Worlds and The Mask of Dimitrios may remember her well. Andrea King received only a few prominent parts, and her career never took off. We fantasy fans know her better as an adventurous ‘other woman’ in Mr. Peabody and the Mermaid, and as the religious martyr heroine of the deliriously demented Red Planet Mars. Ms. King (pictured left) also scores a notable noir presence as femmes fatale in SOuthside 1-1000 and Ride the Pink Horse.

The talented character actor Steven Geray gives Hotel Berlin its only lift of spirits, even if he’s far too cheerful as he prepares to fight in Hitler’s last stand. Geray would score big in an important character part in the upcoming Gilda. He also made his mark in a starring role in Joseph H. Lewis’s interesting So Dark the Night.

Helene Thimig was the widow of German theatrical legend Max Reinhardt, and had fled with him to America to escape Nazi Germany. Thimig almost immediately took roles in Hollywood movies, including seven war- themed pictures.

The Warner Archive Collection DVD-R of Hotel Berlin is an okay but not terrific presentation, and clearly not a new transfer. The titles are unstable and the first few reels a bit murky, along with the sound. The second half is sharper and better in the audio department.

The trailer included is rather surprising — instead of playing up the classy Grand Hotel connection, the ad campaign stresses lurid highlights and promises that the movie will reveal salacious secrets about the Nazi regime. Tillie’s lone encounter with the pilot is hyped thusly:

“Shocking! See them import beautiful girls to entertain the Gestapo!”

And although we see nothing of it, we’re promised

“The inside story of the plot to assassinate Hitler!”

Such exploitative ad campaigns were usually the work of smaller studios. Historians say that by 1945 audiences were getting tired of war-themed movies, so perhaps Warners decided the picture needed an extra jolt.