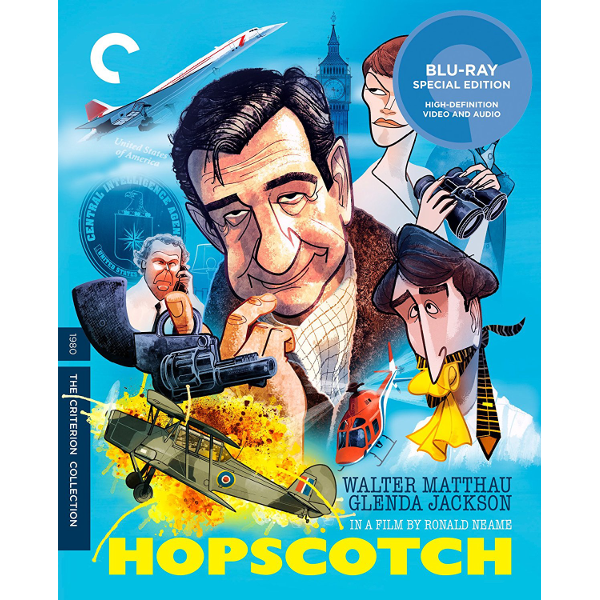 It must be the1970s – even this mid-range ‘old folks’ comedy is engagingly anti-authoritarian. It’s also anti- age-ism and anti- corporate. Renegade agent Walter Matthau makes monkeys out of his employers, flaunting Federal law and all but asking to be murdered, and we’re with him all the way. That’s not exactly the Worship-the-Uniform vibe of TV’s N.C.I.S. — and it’s wholly refreshing. As author Brian Garfield happily says, he’s proud that it’s a spy movie with dangerous enemies, weapons and death threats, and not a single person gets shot. There ought to be an award for that, even though the author is also responsible for Death Wish. And the movie is funny too, in a ‘Dilbert’ sort of way. Sane CIA operative Sam Waterston wears this pleased smile on his face all through the show, watching Matthau make Ned Beatty’s incompetent boss look like a fool.

This is indeed an interesting choice for a low-number Criterion release (163): it is neither famous, nor foreign, trendy, hip, camp, a genre oddity, or the work of a trendy director. Hopscotch is a movie your mother will love, a lightweight spy film more in tune with The Rockford Files than The Spy Who Came In from the Cold. It’s graces are those of a movie that makes us smile — a clever lightweight story, charming actors, and a few surprises along the way. It was made by talented cameraman-director Ronald Neame, of The Prime of Miss Jean Brodie, Gambit, Tunes of Glory and The Horse’s Mouth. It’s one of the best star vehicles for that unlikely romantic leading man Walter Matthau, who generates a kind of comfy old-shoe chemistry with game gal Glenda Jackson. Even the geriatric jokes are affectionate — the movie reminds us how rare it was back then for a movie to suggest that people over forty have sex.

The screenplay could be played as either cynical or silly but director Neame and his actors establish and maintain a consistently amusing tone. Veteran CIA spy Miles Kendig (Walter Matthau) still operates the old way, succeeding in his missions while observing such polite rules of espionage as refusing to arrest or liquidate foes without cause, such as his opposite number in the Russian camp, agent Yaskov (Herbert Lom). This infuriates petty bureaucrat-turned spy manager Myerson (Ned Beatty), who demotes Kendig to desk duty. Miles’ response is instantaneous: he shreds his agency file, and then with the help of Viennese girlfriend Isobel von Shonenberg (Glenda Jackson) goes on the lam, serializing a book of memoirs about the CIA’s most shameful episodes of the last thirty years. Gleefully naming names, he mails his exposé chapter by chapter to interested parties in spy agencies across the globe. A furious and flabbergasted Myerson pits Kendig’s best student Cutter (Sam Waterston) against him, but to no avail — Kendig outmaneuvers them all with sportsmanlike ease.

In the debased film culture of 1980, light comic thrillers were becoming rare. Comedy had been reduced to zinger quips spoken between laser gun battles. Hopscotch supposes that the world’s greatest spy is an ordinary-looking but very smart guy. Miles Kendig can predict his opponents’ reactions and act accordingly, and thus slips through every net employed to catch him. Hendig uses disguises and false identities to move about while staying a hop, skip and a jump ahead of capture. 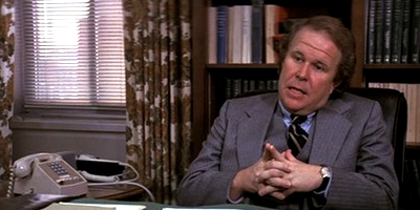 Hopscotch is an odd note in the filmography of writer Bryan Forbes, the director of some of the least humorous films of all time. I really can’t picture a double bill of Séance on a Wet Afternoon and The Pumpkin Eater at a Hollywood Comedy Roast. Hopscotch is no yock-fest, but instead an intelligent light comedy built around a terrific comic character. Matthau all but tosses the film off, which turns out to be the best possible plan. When Isobel first refuses to aid and abet Kendig’s dirty tricks campaign, he puts on a sad Basset Hound face until she gives in (see large top picture ↑). Kendig spends all his spare time either listening to opera or singing as he drives. It’s a bald effort to ‘fill in’ scenes without dialogue, and it works well — Matthau was an ardent connoisseur of opera.

The movie shows us just how conservative today’s movies have become. It’s presumed that the CIA is a shady institution with a dirty past, run by stuffy autocrats and political climbers with little real-world experience. The villain of the piece, Ned Beatty’s Myerson, is the kind of clod who expects the structure of command to function just because he gives orders. He likes to flaunt his power and intimidate people, although he has little success at either. Kendig, on the other hand, bases all of his work on personal relationships. With no ambition greater than doing a good job, he has no patience with Myerson’s feeble attempt to make him a subservient lackey. Kendig invents his own policy — when ordered to eliminate a spy like Yaskov, he simply refuses. He’s dealt with Yaskov for years. If Yaskov disappeared, the CIA would have to start from scratch to learn about his replacement.

Kendig really can’t lose, as he knows exactly how Myerson will act. Myerson runs the agency in such a stiff, by-the-book way that his operatives protect themselves politically instead of keeping their eyes on the goal. That’s why they keep shooting Myerson’s own house to bits, even after they realize that Kendig has tricked them into doing so. They’re following orders, and when they follow orders, they can’t be blamed. The get-back-at-the-boss fantasy is as satisfying as Michael Caine’s murderous response to career difficulties in the underrated A Shock to the System. How many of us have had to suffer a fool of a boss, when we’d rather laugh in his face? It’s like Lee Marvin dismantling ‘the organization’ in Point Blank, only without the body count.

Walter Matthau spent the previous decade exploring more interesting roles beyond his The Odd Couple comedy clowning. Hopscotch has a lot in common with his memorable characters in crime films — the light-yet-murderous Charley Varrick, the hilarious and exciting The Taking of Pelham One, Two, Three, and the mostly grim The Laughing Policeman. Miles Kendig is just a couple of years away from trading in the CIA for AARP, but still vitally interested in life. The script invents for him a low-key, Adam’s Rib kind of relationship with the equally independent Isobel, an operative in her own right who enables his espionage hi-jinks. The romance is more than believable, and in the credibility-stretching spy genre that’s no mean achievement. Again, it’s a question of tone. One scene written by Walter Matthau takes a page from William Goldman’s Butch Cassidy and the Sundance Kid: Kendig and Isobel’s first meeting seems a casual pickup until we realize they’re old sweethearts and are playing games. Excellent acting and bright personalities keep Hopscotch from going flat, or, as Steve Nielson is prone to say, from coming down with a Case of the Cutes.

Ned Beatty does well with the thankless role, playing Myerson as a broad and unredeemable bully. The guy’s interpersonal skills are on a par with . . . I won’t go there. When Myerson comes up against two Englishmen, a spy contact (Allan Cuthbertson) and a publisher (George Baker), they show undisguised contempt. His own wife ignores him. Sam Waterston has no choice but to associate with Myerson, and shows considerable patience. Herbert Lom is given a nicely congenial part, after years of verminous baddies and Pink Panther idiocy.

Hopscotch covers a lot of territory in the U.S. and Europe and as such becomes something of a travelogue. The fast action keeps things moving, but there aren’t any real car chases or fight scenes, just mental chess games and clever surprises. True, the last surprise isn’t credible or even all that clever, as its basic trick is very, very old. But the interesting context compensates quite nicely, and Hopscotch winds up as two hours of intelligent diversion.

The Criterion Collection’s Blu-ray of Hopscotch improves greatly on the DVD from way back in 2002, when the company wasn’t overturning all stones in search of rare extras. The new restoration seems a mite grainy here and there but looks fine overall, with warm colors. The frequent changes of location don’t hurt at all. A nice joke occurs when Kendig arrives in Jamaica. As in spy movies, a dock & pool area is swarming with women in bikinis — all of whom ignore our over-aged hero.

Hopscotch found its main audience at the beginning of the cable explosion, which is where your mother (and mine) fell in love with it. An audio option is an original G- rated broadcast audio track that removes a dozen or so b-a-a-d words, making it again safe for mother if she’s still around.

A teaser and trailer rely on stupid humor, making us wonder if anybody saw the picture theatrically when it was new. The good interview docu with Ronald Neame and author Brian Garfield has been carried over from the old disc. But Criterion producer Karen Stetler includes a new extra, a twenty-minute visit by Walter Matthau to the Dick Cavett show. They ramble brilliantly from subject to subject, proving that Matthau can be hilarious no matter what he’s doing.

Glenn Kenny’s insert essay goes into careers and the slackening market for this kind of picture; the great Ronald Neame welcomed it after having to do the execrable Meteor, which by all rights could have been a career killer. Hopscotch is a diverting, special item. The cartoon caricature cover art — I couldn’t find a clear credit for it — is wonderful.