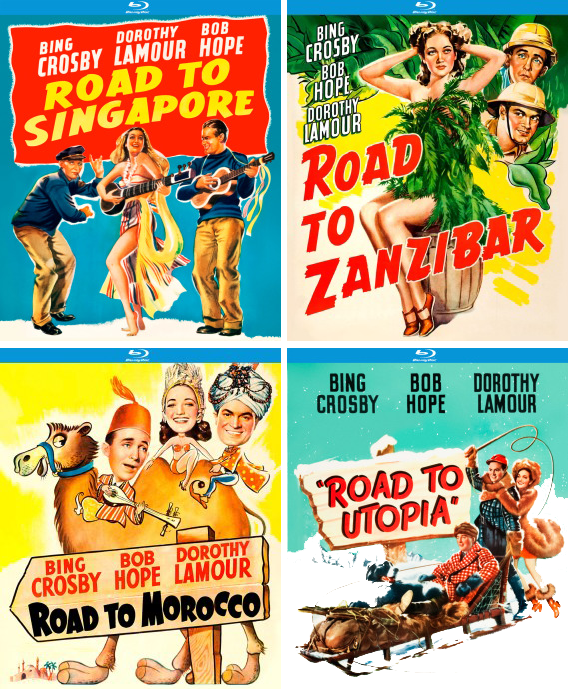 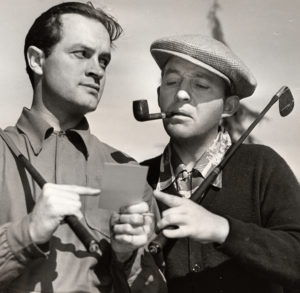 Between 1940 and 1962, Bob Hope and Bing Crosby starred in seven “Road” pictures directed by such distinct talents as David Butler, Norman McLeod and Hope’s own gag-writer Norman Panama who would lead the comedian kicking and screaming into the sixties with How to Commit Marriage, a poison pen letter to the counterculture released in 1969.

Though produced during a World War, the first four Road films avoided the cynicism of that late 60’s farce – instead they were the essence of disposable fun – populist entertainments peppered with topical wisecracks, potshots at company brass and the occasional talking fish. Beginning with Road to Singapore, a burlesque of then-popular South Sea melodramas, the series was eagerly embraced by a battle-weary audience thanks to the uncannily cool camaraderie of its leading men. 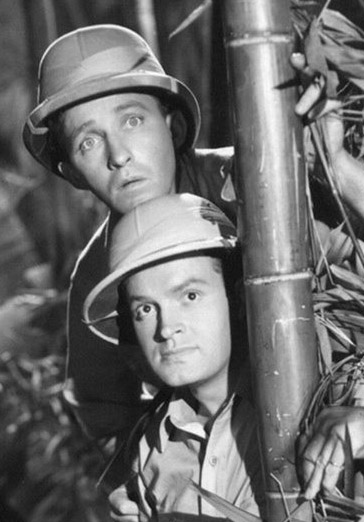 By nature of his reassuring demeanor and Everyman appeal Crosby had already cemented his reign as the country’s preeminent vocalist with an uncomplicated but river deep style critic Henry Pleasants described as “singing in American”.

Hope too was just beginning a rags-to-riches show biz odyssey that ended with his name on an airport and an appearance on The Simpsons. Separately they were industry juggernauts – together they were the ultimate media merger.

Apart from Crosby’s supernatural calm and Hope’s mastery of the pratfall and quip, what defined their Road personas, even into middle age and beyond, was their utter horror of domestication – it was as if Tom and Huck had escaped Aunt Polly’s clutches only to find their true calling as crooner and comedian.

The first four of those easy going time killers have been released by Kino Lorber on Blu ray with superb transfers and a few choice extras.

Victor Schertzinger, already a successful composer (he wrote Tangerine for band leader Jimmy Dorsey), directed Singapore under the working title Follow the Sun, resulting in the most businesslike (i.e., pedestrian) of the films, with Frank Butler and Don Hartman’s script establishing the series template – a framework that proved remarkably elastic over the coming decades. 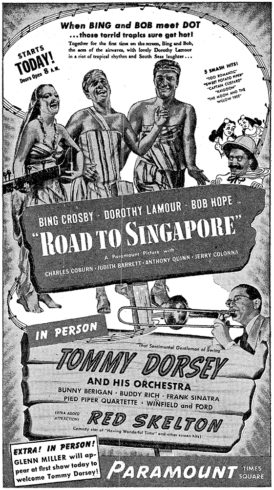 Launched with a New York premiere headlined by Tommy Dorsey and Frank Sinatra in March of 1940, Singapore is as close to a conventional musical comedy as the duo would dare to venture. This would be the first and only time Hope was billed third in the credits (second went to Dorothy Lamour, unofficial pin up girl of the coral reef).

Crosby, the footloose scion of a no-nonsense shipping magnate, renounces his father’s ways and lights out for the islands with Hope in tow – life is carefree till a local damsel in distress named Mima (Lamour) plants herself under their wing.

Mima’s jealous partner (the first of several Anthony Quinn appearances alongside Hope) and the local gendarmes spoil the boys’ de facto slumber party leading to a hasty retreat with Lamour cozying up to Crosby and Hope once again the third wheel. The movie’s astonishing box office success demanded a sequel and that reunion seemed to liberate the fledgling team.

Directed by Schertzinger, 1941’s Road to Zanzibar is far looser and funnier than its predecessor with a vastly improved soundtrack from Johnny Burke and Jimmy Van Heusen showcasing another laid-back ditty from Crosby, You Lucky People, You. The witty twosome’s rapid-fire ad libs (oft times courtesy of their personal writers) would become the main ingredient of the series – their patter is so vivid much of it could have been broadcast intact on The Pepsodent Hour, Hope’s weekly radio show. 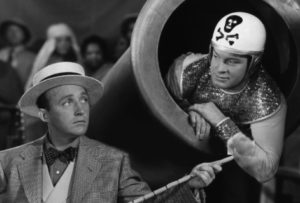 Sy Bartlett’s story lays out the picaresque adventures of Chuck Reardon and “Fearless” Frazier, two knockabout circus performers who head for the hills when their Human Cannonball act burns down the big top. The Swahili Coast promises plenty of opportunity for a shady grove getaway but a couple of con women and the discovery of a chieftain’s treasure prove too tempting for the duo – it’s left to a cage match between Hope and a flea-bit gorilla to decide their fate.

That fur-flying donnybrook is one of the funniest moments in the series and a harbinger of things to come – a cantankerous simian trading sophisticated wrestling holds with Hope at his most cowardly is the kind of manic slapstick that would have delighted Frank Tashlin (the former animator first directed Hope in the salvage reshoots for The Lemon Drop Kid before signing two Hope vehicles, 1952’s Son of Paleface and 1968’s The Private Navy of Sgt. O’Farrell). It wouldn’t be the last time a Road picture resembled a live-action Looney Tunes cartoon. 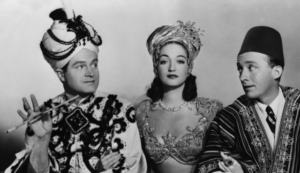 Reminiscent of the screwloose era of Paramount comedies like Million Dollar Legs, 1942’s Road to Morocco is the ne plus ultra of the series, a Hellzapoppin’ farce in which the boys take a wrecking ball to the fourth wall with the help of some low rent back screen projection and a healthy contempt for the straight and narrow (a year later they would indeed take advantage of the airwaves in a  Lux Radio Theatre broadcast of Morocco with Ginny Simms in Lamour’s role).

Once again catastrophe (an upended ocean liner) befalls our heroes, stranding them in a North African Wonderland where Alice would feel right at home among the anthropomorphic camels, wise-cracking ghosts and absurdist set pieces (Paramount’s 1933 version of Alice was directed by Norman McLeod, responsible for 1947’s Road to Rio and some of Hope’s brightest work in the late 40’s and 50’s including Casanova’s Big Night). 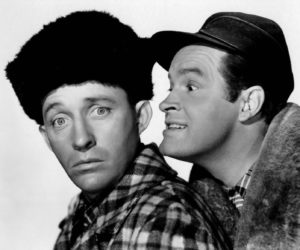 The cartoonish shenanigans became ever more pronounced in Road to Utopia with a running commentary from humorist Robert Benchley and the aforementioned talking fish. Even with an Oscar-nominated script and one singular sight gag (a snow capped mountain transforms into the Paramount logo – a neat trick co-opted by Steven Spielberg for Raiders of the Lost Ark), the fourth Road pic begins to show the cracks in a heretofore invincible formula.

Hope and Crosby are two boardwalk con-men hyping Ghost-O, a shady magic act that separates patrons from their money – the promise of a gold mine sends them north to Alaska and a disastrous encounter with a crooked mayor and a tobacco-spitting pair of gold diggers. The frenzied finale finds the fast friends separated by a snowy abyss and Crosby, for once, left to hold the bag. His fate and the movie’s censor-baiting fade-out is – almost – worth the price of admission.

The public was still hungry for this particular brand of escapism (Utopia was their highest grossing picture yet) and Hope and Crosby happily provided the product albeit with diminishing returns. Rio followed in 1947, co-produced by Hope, Crosby and Paramount followed by the only color film in the series, 1952’s Road to Bali. 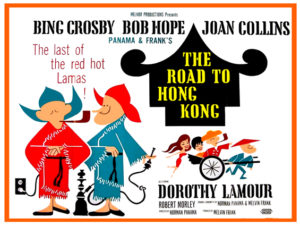 The end of the Road wouldn’t arrive for another two decades – 1962’s The Road to Hong Kong was photographed by Jack Hildyard (The Bridge on the River Kwai) in glorious black and white and produced in England at Shepperton Studios. Stocked with such steadfast Brits as Peter Sellers and Robert Morley and introduced by a title sequence from James Bond’s innovative designer Maurice Binder, the movie is as quintessentially British as the previous films were inherently American, a strange way for such die hard chauvinists (in every sense) to close up shop.

Paramount’s in-house artists were well equipped to handle the Road pictures’ eccentric ways. Cinematographers William C. Mellor (A Place in the Sun, The Naked Spur) and Ted Tetzlaff (Notorious) and such special effects wizards as Farciot Edouart and Gordon Jennings all did yeoman work in service to the inconsequentially silly but seriously needed real world relief.

Their work is given a fine showcase in Kino Lorber’s new Blu rays though the run and gun nature of the productions shows up in the higher resolution, particularly in the bare-bones animation from Jerry Fairbanks (which is still damn funny.)

Kino has added good supplements, mainly Hope-centric, with Bob Hope and the Road to Success, Entertaining the Troops and Command Performance from 1944 though the rah-rah post-war effort, Hollywood Victory Caravan, is a veritable mini-movie featuring both Bob and Bing along with cameos from Barbara Stanwyck, Alan Ladd and eternal fussbudget Franklin Pangborn.