He-bull womanizer Robert Mitchum spars with wife Eleanor Parker for the future of their son George Hamilton in Vincente Minnelli’s attractive, sprawling tale of cruel family unrest. The real winners in the picture are the fresh-faced George Peppard and Luana Patten, whose small-town romance is more interesting than the main bout. 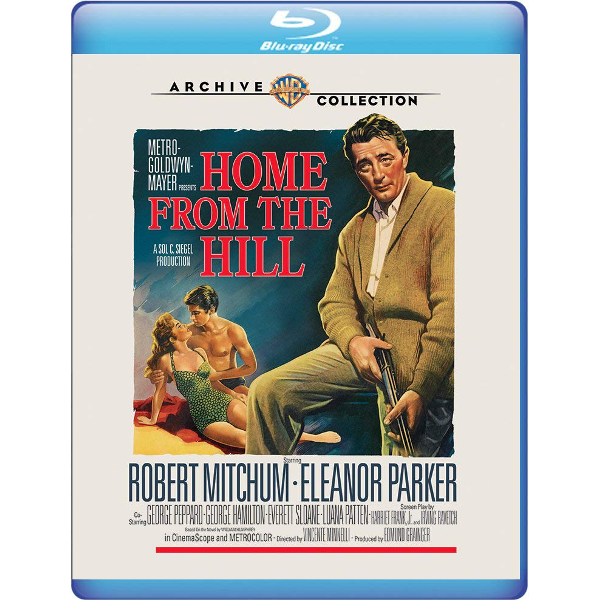 Two and a half hours for a dramatic film was considered long in 1960, but with the current trend of binge-watching ten- and twenty- hour series and miniseries, Vincente Minnelli’s Home from the Hill won’t be much of a strain. It has big stars, with Robert Mitchum in particularly fine form. Minnelli had directed the actor early in his starring career, in Undercurrent with Katharine Hepburn, when Mitchum seemed a poor fit for the MGM brand of gloss. Fourteen years later, here he is a top star in an expensive Metro production, much of it shot on location in Mississippi.

Judging by Vincente Minnelli’s filmic output one would think that the collapse of MGM in the 1950s had never happened. Minnelli kept turning out color and CinemaScope films into the middle sixties, among them giant hits like 1958’s Gigi, an Oscar winner for Best Picture. Minnelli may have officially launched the Rat Pack by teaming Frank Sinatra and Dean Martin in Some Came Running. For this epic-scaled soap opera he turned to Mitchum, who probably liked the idea of a fat acting payday after producing his two ‘DRM’ pictures, Thunder Road and The Wonderful Country. Mitchum never walked through a performance but it was also easy to tell the projects that interested him from the ones that didn’t. In parts of this picture he’s as good as he is anywhere.

By the look of the cars, the show takes place in East Texas in the late 1940s or early ’50s. Land baron Capt. Wade Hunnicutt (Mitchum) has a formidable reputation as a tomcat and has been ‘romantically connected’ to most of the attractive females in the county. It’s all due to a lousy marriage to Hannah (Eleanor Parker), whose fury knows no bounds. On their return from a European honeymoon long ago, one of Wade’s lady friends confronted Hannah with his newborn bastard son. Hannah hasn’t slept with Wade since. Now Wade has a legitimate 17 year-old son, Theron (George Hamilton) that Hannah has turned into a real mama’s boy. Wade breaks his promise and takes the gangly youth under his wing, allowing him to quit school and teaching him the manly art of hunting, the favorite local sport. Theron proves himself by defeating a ferocious wild hog, but runs up against trouble when he tries to date the local ‘nice’ girl Libby Halstead (Luana Patten of Song of the South and Johnny Tremain). She’s game but her father Albert (Everett Sloane) throws Theron out, fearful of his daughter being ravaged by a Hunnicutt. Theron and Libby choose to meet in secret, which leads to trouble…

That’s when Theron discovers a deep secret about his father’s young foreman Rafe Copley (George Peppard), and rejects Wade and his whole privileged setup. The boy moves out, breaking his mother’s heart. But when Libby turns up with a problem pregnancy, town gossip and runaway emotions get out of hand.

Vincente Minnelli has always been the darling of the auteurists. He spent almost all of his career as a top-rank MGM director, and made some of the studio’s best musicals. For his later dramas Minnelli was praised for his use of the CinemaScope screen and his literally color-coded themes. The dramatics in these shows lacked subtlety, whether it was Kirk Douglas grimacing in a mirror in Lust for Life or just about everything in the over-acted, overcooked The Cobweb. Part of the Curse of MGM was shooting ’50s and ’60s movies with the studio’s old techniques. A potentially good picture like Brigadoon played out against some of the biggest, least attractive cycloramic sets ever painted. A big chunk of Home from the Hill was filmed on location, yet Minnelli set the art directors loose on reality as well. One can imagine his corps of set dressers worrying over the texture and tint of every blade of swamp shrubbery. To depict swamp gas, we see billows of yellowish smoke.

In one scene George Peppard talks to Luana Patten as she washes a car. The first half of their talk appears to be filmed on location. Then the scene suddenly switches to a studio interior, matching everything except the lighting and atmosphere. Minnelli would later go to CineCittá to film Two Weeks in Another Town, yet shot almost everything on the Culver City back lot.

Robert Mitchum is like a rock — the film is enjoyable just to watch him perform. The actor paints a good portrait of someone with contradictory beliefs. Wade insists on his prerogative at all times, and is callous in his treatment of other people. He certainly has no inhibitions against persecuting Rafe or bullying Theron, so we see no reason why Wade wouldn’t have dragged his unhappy wife to bed whether she wanted to go or not. Wade proudly tells us that some of the stuffed animal heads on his wall put up tough fights before they died, and we want to laugh at his idea of fair odds.

Mostly filmed on location, Minnelli’s hunting scenes are actually rather good. He uses long trucking shots to show the men tracking a wild boar, which mangles several dogs before being cornered in a clearing. The scene seems patterned on one from Clarence Brown’s The Yearling, but stands on its own. An entire segment of America still subscribes to Wade Hunnicutt’s definition of manliness as proved through a physical ritual, preferably with guns.

Eleanor Parker frequently excelled as desirable women that win difficult men through courage and resolve, as witness her excellent work in Byron Haskin’s The Naked Jungle. But the Hill script leaves her Hannah mostly out in the cold. Her formal manners are so constricted, it seems odd that Theron wouldn’t notice her emotional problems until now. When Hannah defies Wade by refusing his advances, she comes off as a frigid bore, not a righteous woman wronged. Then Hannah must become overly hysterical when her ‘baby’ boy is taken away.

Minnelli concentrates instead on the male relationships. Wade’s personal posse of tenant farmers (including Dub Taylor and Guinn ‘Big Boy’ Williams) act like yokels and are too broadly played. They inadvertently spread rumors of Wade’s sexual exploits to the wrong ears. The film has two ‘new star’ discoveries. George Hamilton has the plum role and isn’t particularly convincing; although only twenty, he already looks too old. Anthony Perkins was by now also too old to play yet another insecure teenager. Hamilton would score highly desirable parts for years to come, based I suppose on his good looks and impeccable poise.

Home from the Hill‘s real find is George Peppard, who as Wade’s foreman and Theron’s pal steals the movie outright. Peppard’s natural hayseed Rafe is the only person in the story who knows his own mind, and is therefore the one we gravitate toward. The script prepares us well for scenes that resolve Rafe’s deep need to find his rightful place in the world. Peppard had been in a couple of movies and quite a lot of TV, but after this show he became a major star with Breakfast at Tiffany’s. Young Luana Patten never became a noted name, but she’s the second reason to watch Home from the Hill. Her local girl Libby shares interacts with Rafe in a supermarket and a coffee shop, scenes so good they almost dissolve the barrier of MGM gloss. Their conversation moves quickly to a marriage proposal that is believable and compelling, and seems a good idea for everybody. By the end of the show, we care much more about Rafe and Libby’s situation than we do the marital split between Wade and Hannah. In fact, when Mitchum’s great hunter finally ‘comes home from the hill’ for a last-minute reconciliation, all we can ask is why it didn’t happen nineteen years and fifty-one weeks earlier.

Minnelli wraps up his tale with a throat-tightening graveyard scene that always wins audience approval. It worries us that Rafe extends an invitation to Hannah to move into his household. An un-filmed sequel could have been called Over the Hill; in it Libby would get fed up with Hannah butting into her home life and leave town with the baby. For that matter, how will Libby ever put up with Rafe’s stinking hounds, the ones that come running when he clicks his fingers? Will Rafe revert to form, and try the same finger-snapping obedience trick on Libby?

Constance Ford has 2.5 scenes as one of Wade’s good-time girls. Everett Sloane carries an intense but thankless part as Libby’s resentful father Albert. I was rather hoping that Albert and Hannah would surprise the pompous Wade by revealing that they’d been carrying on a decade-long affair; that would even the score somewhat. Home from the Hill’s Alpha-male Wade Hunnicutt learns the most important lessons in life and love twenty years too late. He defines himself by the racks and racks of loaded guns he keeps in his den. It is fitting that the story is resolved in old-fashioned Hollywood style … with an All-American ambush gun-down.

As with other CinemaScope Vincente Minnelli features, the Warner Archive Collection’s Blu-ray is Home from the Hill’s first good home video presentation. Minnelli films so many scenes in wide masters that the added resolution of HD is really a boost for the reading of facial expressions. Colors are very good, right down to the pale yellow clouds of ‘sulphur steam’ that mark the deadly quicksand on Wade Hunnicutt’s property — and remind us of the smoke effects he used in pictures like An American in Paris and The Band Wagon.

The clear audio gives us an earful of Bronislau Kaper’s title tune, which sounds almost exactly like the opening bars of the ‘Tammy’ song associated with Debbie Reynolds’ Tammy and the Bachelor (1957). A trailer is included.

Could the same director’s Some Came Running be on the way? The ratty old analog copy shown on TCM has recently been replaced with a beautiful new encoding, which makes me think that we will have more Minnelli in our future.