Douglas Sirk’s first American movie came out so well that PRC sold it to MGM, earning Sirk a promotion out of the Poverty Row studios. John Carradine is excellent — and underplays! — as the Hangman of Prague who moonlights as a depraved sex criminal. But the context in this wartime propaganda movie is serious — it commemorates the Nazi murder of an entire Czech town. 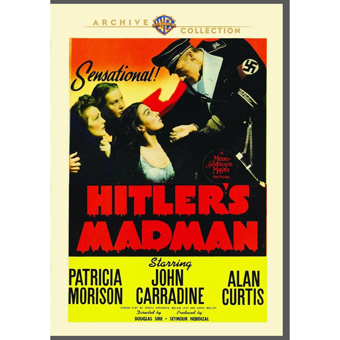 When Hollywood got the official call to join the war effort, some pictures used shock tactics to educate infuriate American audiences with the nasty way the Axis was prosecuting the war.  Movies about Japan weighed in early and often about Japanese atrocities in China and to U.S. servicemen — the stirring The Purple Heart showed captured U.S. flyers of the Doolittle Raid martyred at the hands of a barbaric military court. With the war declared, filmmakers were finally able to express some outrage about Nazi atrocities against European civilians. Before the beginning of hostilities most film references to German crimes had been blocked by isolationist (read: pro-Nazi) right-wingers in Congress. 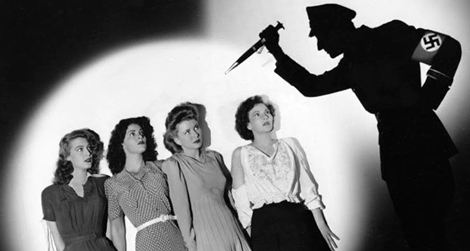 The assassination of the SS Reichsprotektor Reinhard Heydrich in June of 1942 provided an early focus point for Hollywood propagandists. In revenge for the killing of Heydrich, Hitler ordered the elimination of an entire Czech town, murdering all the men and shipping everyone else off to concentration camps. ‘Martyred Lidice’ became a focal point of anti-Nazi fervor. Fritz Lang’s version of the underground organization in Prague that carried out the killing is a brilliantly executed, totally fanciful Mabuse- like tale of crime and espionage, Hangmen Also Die!   But a second account of the assassination was a little closer to the facts. In 1938 top German director Hans Dietlef Sierck was sufficiently well connected to pull various visa and passport tricks. He scouted a location in Italy, slipped away to Switzerland and from there exited to France. Unlike some German expatriates, Sierk was a Protestant and had the means to buy his passage. He was able to direct films in France and the Netherlands, right up to the outbreak of war. 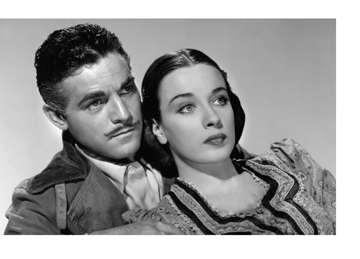 Sierck’s timing was perfect. With a Warner Bros. contract to remake one of his German films, he booked a berth on one of the last peacetime passenger cruises to America. When the project fell through he stayed on salary doing nothing. Thinking his career might be over, Sierck bought a chicken ranch in the San Fernando Valley, and then some alfalfa and avocado acreage. He then was hired by Columbia, but didn’t make any films there either. His first American picture was independently financed by other emigrés and produced at the Poverty Row studio P.R.C..  Famous Metropolis effects cameraman Eugen Schüfftan was the cinematographer, but couldn’t take credit because of Guild rules. Edgar Ulmer designed the film. The producers had to change its title ‘Hitler’s Hangman” because of the bigger Fritz Lang production. The extremely cheap picture was so good that P.R.C. shopped it to other studios. MGM bought it outright. They fixed it up with better opticals, had Sirk reshoot some scenes and added a couple of new ones.

Just a few years earlier Sirk had been a prominent director in Nazi Germany. He had even met Reinhard Heydrich at a party… and said that his filmic Heydrich John Carradine looked quite a bit like the real ‘hangman.’ 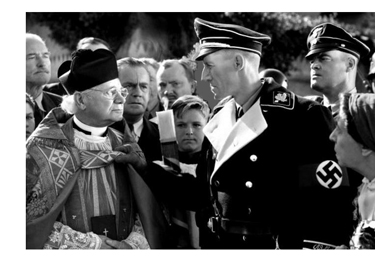 Hitler’s Madman has several writers, probably owing to MGM’s reshoots. It also dresses up the film with a poem by Edna St. Vincent Millay, The Murder of Lidice. Various lines of the poem are quoted at the beginning and the end of the movie.

“It was all of six hundred years ago.
It was seven and if a day.
That a Village was built which you may know
by the name of Lidice.”

Were these added by MGM?  It would seem consistent with Metro’s house style, to lend the film a literary gloss. Sirk’s movie sees Czech liberation patriot Karel Vavra (Alan Curtis) parachuting near Prague to organize sabotage and resistance. He gets help from his hometown of Lidice — after initial trepidation, the local men back him up. He lives in a cave with an odd hermit, Nepomuk (Edgar Kennedy). A capable no-star cast enlivens the production — Ludwig Stössel, Ralph Morgan, Jimmy Conlin from the Preston Sturges movies, Elizabeth Russell from the Val Lewton movies. Karel mainly stays out of the action, acting romantically noble with the leading lady, top-billed Patricia Morison. Cameraman Schüfftan’s delicate images transform the already beautiful Morison into a vision of sweetness and virtue. 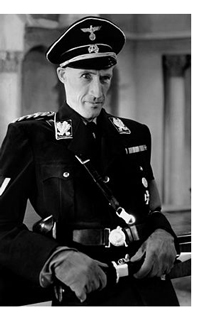 The real center of interest in Hitler’s Madman is the actor playing Reinhard Heydrich. John Carradine’s most noted role to date was the labor organizer Casey in John Ford’s The Grapes of Wrath. Carradine continued in mostly lower-case supporting roles for directors who liked him, while picking up small change assignments from the smaller studios, increasingly in horror films. Carradine is a superb Heydrich, giving the SS hangman a palpable authoritarian menace and never going overboard with his dialogue. He’s a marvelously controlled villain, even allowed a sense of humor. One of his smiles makes him closely resemble his son David. Carradine is given a large fake nose. It looks particularly good, even after a lengthy time on screen. It’s hard to find a blend line.

Fritz Lang’s Heydrich in Hangmen Also Die! is a one-scene appearance by actor Hans Heinrich von Twardowski, who had played a role in the classic The Cabinet of Caligari and had a bit part in this picture. Fritz Lang was never noted for having a sense of humor. Twardowski’s Heydrich is a gross caricature of a preening sex pervert, a screamer who wears a perpetual sneer and perhaps also lipstick.

One scene could have been laughable, but Carradine makes it a key highlight. The movie’s advertising puts forward the notion that the Reichprotektor is personally involved in the rape of Czech beauties. The scene is like a lineup in a crime picture, but instead of criminals we see a string of young women. They either cower in fear or wait stupidly, uncomprehending of their fates. As if in a brothel, Carradine assesses them one by one, and announces that they’ll all have the privilege of servicing noble German officers. Cute-and-innocent Clara Janek (Jorja Curtright, who continued to a 25-year career) screams in protest and does something extreme to avoid a fate worse than death. Her father back in Lidice (Victor Kilian) won’t find her on the bus that night. Heydrich just grins. 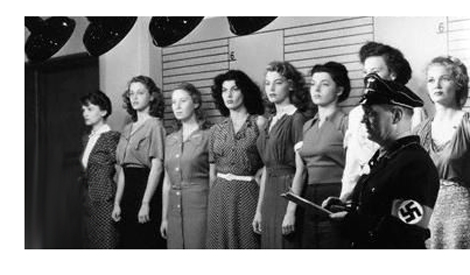 One of the women shivering in the lineup isn’t given a close-up, but we can spot her dimpled chin from across the room. She’s not even one of the more glamorous girls, yet she’s none other than Ava Gardner. I’d assume that this scene might be an MGM reshoot, if Gardner weren’t being loaned out as often as she appeared in bits in MGM pictures. She was already to married to Mickey Rooney at this time.   Gardner is the fifth from the left  →

Hitler’s Madman is quite an accomplished little production. It’s difficult to tell where the P.R.C. footage leaves off and the MGM reshoots begin. The fancy final montage of the destruction of Lidice presents an Our Town– like vision of disembodied victims reading the St. Vincent Millay poem. It’s a clean composite that probably came from MGM’s optical department, although I’m still guessing.

The actual ambush of Heydrich’s car took place on a paved highway on the outskirts of Prague. Hangmen Also Die!  is total fiction and we don’t see the ambush. The much later docudrama Operation Daybreak shows the raid as it occurred, in the original locations. The assassination in Hitler’s Madman is one of the few scenes that says, ‘inferior PRC quality.’  Sirk’s ambush occurs on a dirt road barely wide enough to be a horse trail. As happened in reality, we see the Germans retaliate by wiping out the town of Lidice, and event that went down as one of the most heinous war crimes of the Czech occupation. In this movie the men of Lidice actively aid the assassin, who comes from that town. But the Germans didn’t know that when they choose Lidice for annihilation. The truth was even more onerous — Lidice was ‘innocent,’ totally unrelated to any anti-Nazi conspiracy.

A notable box office success, Hitler’s Madman worked a minor miracle on Douglas Sirk’s career. European refugees Jean Renoir and René Clair went directly into quality productions, but less well-known talents like Steve Sekeley and Frank Wisbar disappeared into the limbo of Poverty Row, where Edgar Ulmer had taken up semi-permanent residence. Thanks to the visibility of Hitler’s Hangman, Sirk moved up to higher-profile independent productions. He directed a couple of films on his Columbia contract before moving to Universal in 1950 and connecting with producer Ross Hunter. He finally jumped to the top of the industry in 1954 starting with the big hit Magnificent Obsession. 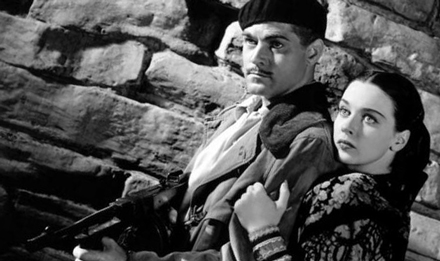 The Warner Archive Collection DVD-R of Hitler’s Madman is an excellent encoding of a film source in fine condition. As I said up top, the PRC portions of the movie — presumably most of it — are fairly indistinguishable from the MGM reshoots. I don’t know if the reshoots were done at PRC or MGM, or if Eugen Schüfftan continued as the stealth cameraman. The overall look is more sophisticated than typical PRC and more artistic than the average Metro picture. Patricia Morison’s eyes are made to catch the light quite beautifully.

Just released by the Warner Archive is RKO’s Hitler’s Children, an even more exploitative look at fiendish Nazis and their sex crimes. I’ll try to review it next week.